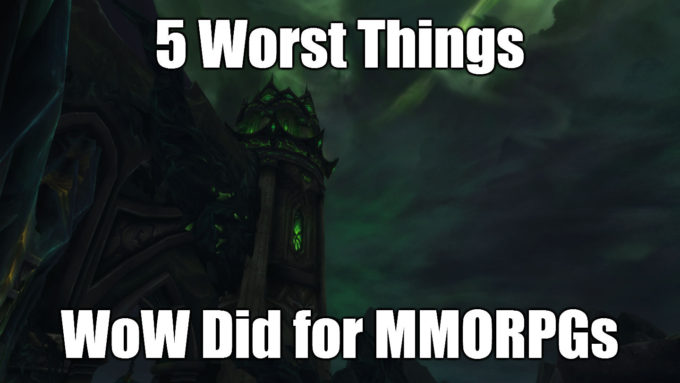 World of Warcraft is the beast that can’t be beaten. Well over a decade after launch, World of Warcraft has just released their sixth paid expansion pack. People like to point to declining numbers as the game’s demise, but populations naturally ebb and flow. The venerable MMORPG still boasts millions of monthly subscribers, a claim no other game can make. From all accounts, Legion will be the addictive experience people hoped for from Warlords of Draenor.

This massive success has been great for Blizzard but hasn’t been all rosy for the MMORPG landscape. Due to World of Warcraft’s success, certain design elements and player expectations have negatively impacted the genre as a whole. I’ve enjoyed my previous stints in virtual Azeroth, but when I look to new experiences, all I can see is World of Warcraft’s dark tendrils corrupting them. Fantasy MMOs in particular seem the most infected.

It’s as understandable as it is unfortunate.

World of Warcraft made it extremely easy to hit max level. Progress flowed naturally as players moved from one zone to the next. Quests would reward players with higher level gear and monsters would drop loot to fill the gaps. Everything felt really good, but the entire tone of the game changed at max level. This led to some extreme “alt-itis”, but not everyone wanted to create new characters. For them, progress could only be found in endgame dungeons. Thus, the gear treadmill was born.

Up until World of Warcraft, hitting max level took a lot of dedication. There were some nice pieces of loot to be found in high level encounters of games like EverQuest, but it never felt like the focus. MMORPGs need progression though, so reaching max level fast could only lead to one of two things: alternative progression or canceled subscriptions. Obviously going with the former, WoW chose alternative progression in the form of gear. The problem with this progression is how stiff and repetitive it feels compared to the organic nature of quest progression. Improvements have been made to Warcraft since launch and their dungeon design is top notch. I just can’t help but feel MMO progression innovation has been seriously stifled by the gear treadmill.

Our article last week on “why reputation grinds suck and how to fix them” partially inspired this post. Reputation has been part of World of Warcraft for a while, though many may not remember it. Top tier raiders needed to grind reputation in vanilla for high end gear, but for most people reputation was just a number you could level up for the hell of it. These folks were already setting themselves to grind dungeons for gear so it wasn’t a big deal yet. When Burning Crusade launched, reputation became a universal form of progression. A very bad, very boring form of progression.

In order to play dungeons on the highest difficulty, keys were required. Keys could be acquired by running the dungeon on normal difficulty over and over to increase reputation. Additionally, many new dailies and reputation grinds opened up to players. High levels of reputation led to rewards like great gear and unique mounts. Reputation for WoW and MMORPGs has changed over the years, but they generally exhibit the same principles: repeat content to progress. One of the things that made World of Warcraft so enjoyable in the first place was trashing repetitive mob grinding. But here we are with them instilling lazily designed, repetitive progression into MMORPGs across the world.

Coming right off of Dark Age of Camelot and Shadowbane for World of Warcraft’s launch, I was a little skeptical of the two faction system. How could two factions compete against three or an open system? On the other hand, the immersion that Alliance vs. Horde offered obliterated previous competition. I loved Warcraft as a kid, and I was not alone. Maybe it would work out well after all?

It didn’t. Well, at least not for the genre.

Despite it’s name, World of Warcraft is not a serious PvP game. It’s a casual PvP game with accessible arenas and battlegrounds. Even on the PvP servers, PvP was little more than a diversion. Sure, it was fun training back and forth between Tarren Mill and Southshore. Sneaking into high level enemy towns had its moments. But there just wasn’t any weight to it. I think Blizzard realized the difficulty in balancing such a system so they turned to instanced PvP. And yet, MMORPGs such as Aion, Rift, Star Wars: The Old Republic, Allods Online, Warhammer Online, and a slew of less popular titles decided to run with the two faction system for their open world.

Two faction PvP does not work. It’s inherently unbalanced. One side will always outnumber the other side. The lack of dynamic alliances create repetitive scenarios. Blizzard saw the issues early on, but other publishers just saw the two faction system working.

World of Warcraft changed how we leveled in MMORPGs in a huge fashion. At first, I welcomed this change. No longer was I dependent on finding a group to level. No longer did I need to dedicate several hours in an evening to sense accomplishment. World of Warcraft’s quest system let players progress at their own pace and accomplish something on every login. While adventuring through Azeroth, I never considered this an issue. It wasn’t until much later that I saw the ramifications. 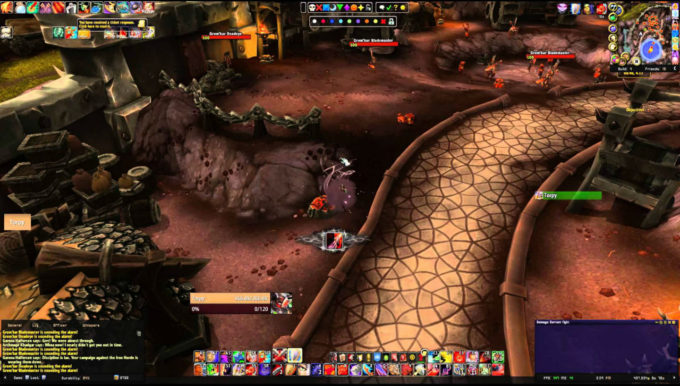 Allowing almost all content to be defeated individually destroys the need for a group. The only people I knew playing WoW were people I knew before I started playing. Outside of friends of friends who joined our guild, I didn’t really meet anyone. The game wasn’t structured for that. Then max level comes along (with that damnable gear treadmill) and now all of the sudden a big guild was needed to keep advancing. The game went from lighthearted individualistic leveling experience to hardcore group based content at the flip of a switch. I can imagine how frustrating it was for those getting along just fine by themselves.

This set the standard for MMORPGs who wanted to be the “next WoW” (Hint: no one will ever be the next WoW). Level up via solo quests, then funnel people into group based dungeon activities at level cap. People in World of Warcraft (and other MMORPGs) now feel less like people and more like tools. Dedicated grouping has been on life support in the genre for a while, and WoW is largely to blame.

Perhaps the worst thing World of Warcraft did to MMORPGs is set the expectation levels too high. WoW didn’t have the greatest launch, but Blizzard quickly turned the game into a powerhouse. In true Blizzard fashion, they didn’t revolutionize so much as evolve. They took what made EverQuest great (the largest Western MMO at the time), polished it to the nth degree, and made it widely accessible. And say what you want about the company, but polish is something near synonymous with Blizzard now. The game is intuitive and well designed with few ambiguities. It never gets in it’s own way, something many other MMORPGs are guilty of.

Obviously, that polish is a good thing for World of Warcraft. However, it also set the expectations unrealistically high for first time MMOers. In the MMORPGs that followed, almost all of them were multiple tier levels lower in presentation quality. Some great ideas and concepts were passed over by the masses because of rougher designs. I think in many ways, WoW just set expectations too high with that classic Blizzard polish.

World of Warcraft is a fantastic MMORPG. It does what it does very well. I’m not arguing that. Unfortunately, success breeds copycats. In the MMORPG genre, that’s not really good for anyone.

7 thoughts on “5 Worst Things WoW Did for MMORPGs”