I’ve slowly come to an important realization. The time in my life where I could truly dedicate myself to a single MMORPG has past. It sounds like a bummer for someone bearing MMO Bro as a moniker, but it’s not so bad. My only complaint is the difficulty it presents when it comes to socialization. Spending time to build up friendships in a game I might not play in a few months is tough. Fortunately, many a gaming friendship has persisted throughout the years (both of the online and offline variety). For that reason I’ve been looking more into good MMORPGs to play with friends. These are either games I can start off soloing and bring friends in later or join an existing friend who’s really enjoying themselves.

Just like players who prefer solo vs. group content, what makes an MMORPG good to play with friends is highly subjective. The key aspects to me are some form of level scaling or horizontal progression, a focus on group content, alt encouragement, and bonuses to playing with a consistent group. The below list is roughly ranked from 8th to 1st, but I’ve avoided a true “top 8” this time around because of the inherent subjectivity. 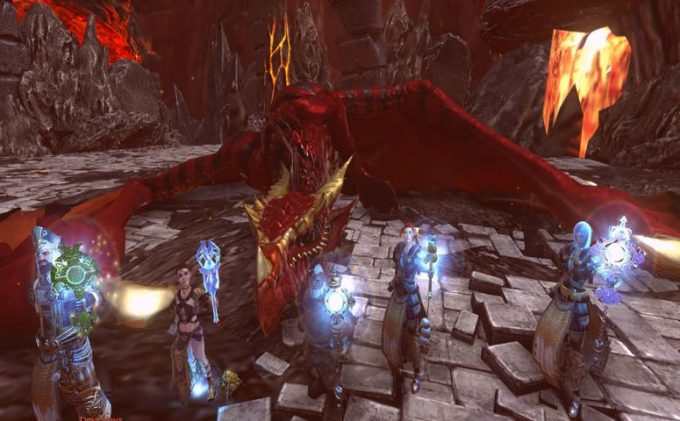 Neverwinter is a Dungeons and Dragons inspired MMORPG. Thus, it unsurprisingly includes dungeons and dungeon offshoots called skirmishes as a primary method of advancement. These can be tackled by groups of five players and make for a fairly balanced challenge. Players can also create their own dungeons using the Foundry system so tabletop players may also enjoy making and sharing their scenarios with friends.

There’s also some form of downleveling for friends who want to play Neverwinter with their lower level pals. Unfortunately it’s only available for dungeons and not the shorter skirmishes, with the exception of a Call to Arms event. The Calls to Arms skirmishes allow players of practically any level to play together in a special event. They just don’t tend to run for very long. The level scaling isn’t super well balanced either as higher level players maintain their improved skill ranks. This can lead to the lower level player feeling somewhat useless. Nonetheless, the wealth of group oriented content in Neverwinter with some option for players of disparate levels earns Neverwinter a spot on this list. 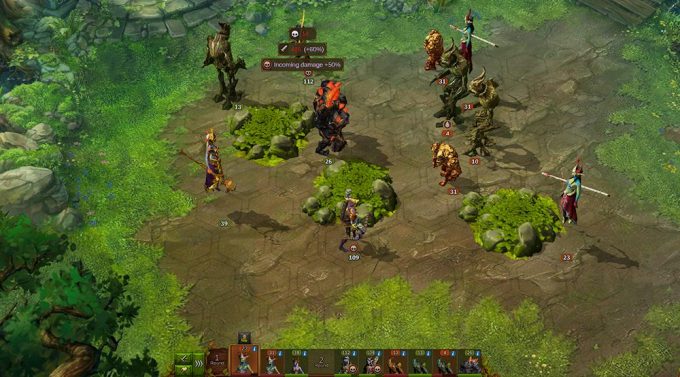 The vast majority of city builders revolve around killing other players. These leads to two issues – paying to actually win and elimination of friends from the world. Elimination doesn’t really make for a very good MMORPG to play with friends. Elvenar solves these issues for players who want something casual to play from their browser but still enjoy the interaction with others. Elvenar is a purely PvE city builder with a multitude of options to assist other players.

Neighborly Help is one such concept that will reward you with gold for donating resources to another player. Of course that means others are also encouraged to donate to you. Moving outside of the city building and into combat, Elvenar recently added Fellowship Adventures. Players can assist each other in an asynchronous adventure where each player conquers challenges individually. The game’s turn based combat strikes a good balance between browser simplicity and tactical challenge. It is sadly missing any sort of real time cooperative element. Hopefully one day the developers will tack that on too. While Elvenar is far from perfect, it’s a good option for friends seeking a lower time commitment browser MMO.

There’s no doubt that Final Fantasy XIV is a great game. However, most of that is geared towards story or playing with a consistent group of equally dedicated players. There is downscaling for dungeons, but I don’t find this as rewarding as other MMOs. The real reason that I think Final Fantasy XIV is a good MMORPG to play with friends is because of the game’s job system.

This is one MMO game that has basically eliminated the need for alts because players can change jobs (i.e. classes) at the drop of a hat. There are base job level requirements for many advanced jobs, which encourages players to “start over” with a lower level job. There’s a little more to it than that, but the system is easy to explain. More experienced players can dedicate a lower level job to playing with particular people. Eventually those jobs levels will manifest in usage either through subclassing or flexibility for higher level content. 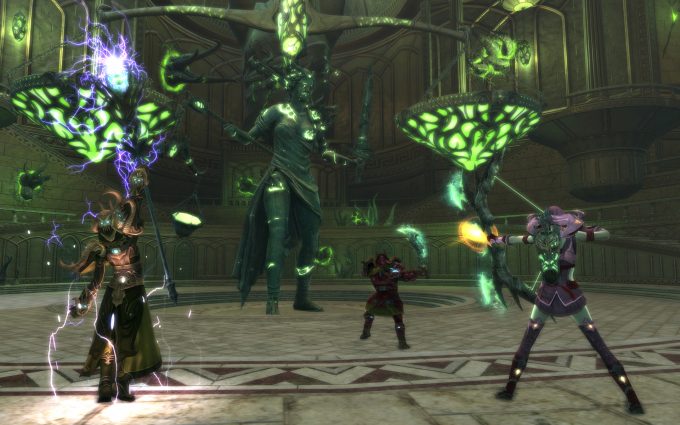 Rift has always struck an interesting balance between group and solo play. A lot of content revolves around the game’s titular rifts that require players to work together to close. They’re fun but can deliver a samey experience after a while. That community system has evolved over the years into instant adventures which provides level scaled quests for up to twenty players. It’s a very appealing feature when typical MMORPG group caps of 4 to 5 just don’t cut it.

In addition, Rift offers a mentoring and sidekick system. When enabled, this will scale grouped players up or down based on the zone’s content and the party members’ levels. Some will really appreciate that Rift allows for level scaling for those who want it without necessarily forcing it upon everyone. The ability to play with a large group of friends without relying on endgame raids is also fairly unique among MMORPGs. 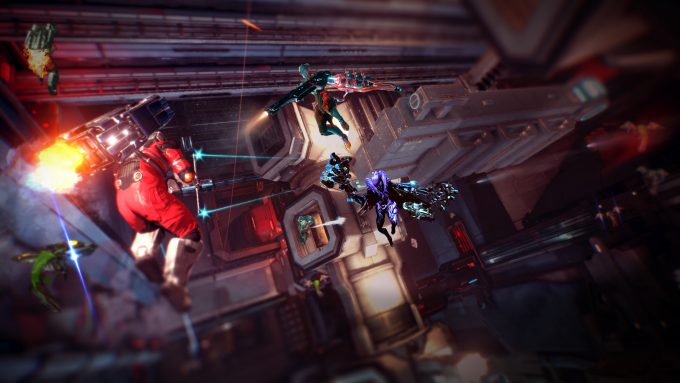 What makes Warframe so good to play with friends is very similar to Final Fantasy XIV’s appeal. There is no level scaling in this game, but there is a plethora of warframes which play differently in a manner similar to MOBA characters like in League of Legends. Each warframe has it’s own level, but there are a number of factors that separate this approach from simple alt characters.

The biggest of these factors is the existence of mastery ranks. These are metalevels gained from ranking up companions, weapons, and warframes. Higher mastery ranks grant access to more tools, increases starting mod capacity, and raises many daily limits. It’s also a bit easier to increase mastery ranks with fresh warframes and weapons as they level up faster. Speaking of weapons, those also level up in this game, which increases mod capacity. If all of that isn’t enough, players can also reset a warframe’s rank to change polarities (which alters which types of mods can be slotted). These features can make Warframe feel like a grindy MMO at times, but on the bright side there’s a lot of flexibility for friends seeking an MMORPG to play with one another. 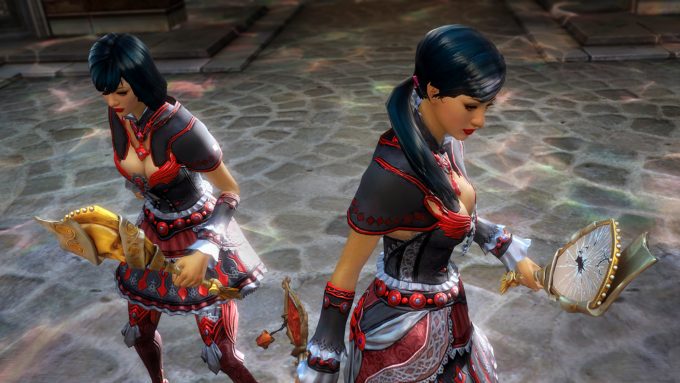 Guild Wars 2 launched with a mission not to waste people’s time with grinding for items and levels. Though that’s arguably a core concept of the genre, Guild Wars 2 has largely succeeded in eschewing the common progression treadmill. Levels come fast and, thanks to zone downscaling, allows players to explore low level areas without sacrificing some semblance of challenge. But leveling up together in zones is just part of what Guild Wars 2 offers friend circles.

World vs World (WvW) is an ongoing massive struggle between three servers that resets weekly. Servers of players will rank up or down according to the results. Upon entering WvW all players are bolstered to max level. Small groups can often be effective in contributing to the war, but there’s plenty of reason for your small group to join a larger one. Now, GW2 is not only a very good MMORPG to play with friends who like PvE or PvP combat but is also great for those who like exploration. The lands of Tyria are littered with jumping puzzles that can be fun to solve together. There’s a little something for everyone to experience, and it can all be done as part of a team.

For the group of friends that would rather kill another group than kill AI controlled critters, I present Eve Online. This an MMO that’s great for friends because of the skill system and combat structure. It takes almost no time for a player to effectively pilot a baseline frigate. While these light ships can’t compare to cruisers or capital ships in terms of sheer firepower, they have their own roles in battle. They’re also speedy and make for great pirate ships or guerilla tactical strikes. A band of friends can easily have a blast as a group of frigates roaming the vastness of space.

Another core feature of Eve Online is that the skills train in real time. More casual players won’t fear the sensation of getting lapped by their more hardcore companions. For groups that can’t always play on the same schedule, it alleviates a lot of anxiety that can come with getting into a new MMO. Eve Online is all about an endgame that starts immediately and everyone is welcome to join in. The PvE features aren’t really the most exciting though so be prepared to fight against others sooner or later. 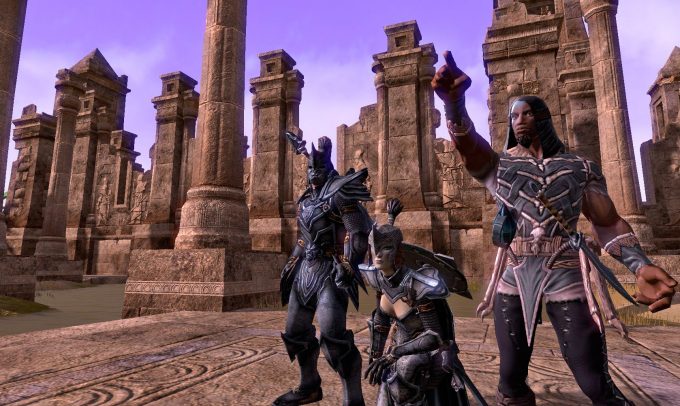 Late last year, Elder Scrolls Online made a huge change that’s completely altered the accessibility of the game. One Tamriel went all in on level scaling by adjusting lower level players up to the game’s soft level cap. This level scaling was in effect all the time and meant that with the exception of a few higher level dungeons, anyone could go anywhere at any time. In my opinion, the game shifted into a much stronger Elder Scrolls feel that rewarded exploration. At the same time, it opened the doors for friends with different interests and different time commitments to play with one another.

There is a ton of content to discover in Elder Scrolls Online: solo dungeons called delves, public dungeons, skyshard hunting, questing, instanced dungeons, three faction PvP, and more. And all of it can be played alongside one’s buddies and/or significant other. I’ve been able to attract a lot of people to ESO, and that’s largely due to One Tamriel. In my mind, Elder Scrolls Online is not only good, but is the best MMORPG to play with friends right now. But like I said before, it’s all subjective.

Some of the above titles also offer refer a friend programs. If you find a new MMORPG that strikes your fancy, do a little research. You might find that inviting friends can bring rewards for both the inviter and invitee. And of course if you feel like there’s a game missing from the list, add it in the comments. We are talking about MMORPGs that are best played with friends after all. The more the merrier!