StarCraft II’s co-op mode has become something of a sleeper hit after its release with the Legacy of the Void expansion last autumn. Despite minimal attention from gaming media, it’s developed a thriving community of players and is now at least as popular as StarCraft II’s famed PvP. 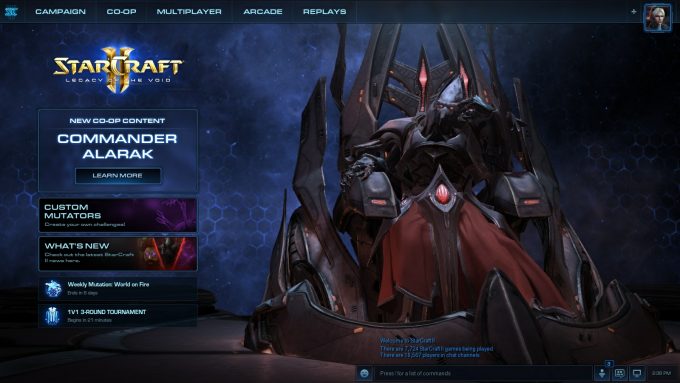 SC2’s co-op got some major shake-ups this month with the addition of a new playable commander, fan favorite Alarak, and a new map, Mist Opportunities, in the 3.6 patch.

Sometimes, it’s nice to take a break from MMOs. Being an avid co-op player myself, I was eager to get my hands on these new updates.

The Tal’darim leader Alarak became an instant fan favorite when he was first introduced in the Legacy of the Void campaign. A lot of this can be attributed to John de Lancie’s excellent voice-overs, which elevate smugness and contempt to a fine art. Now Alarak has joined co-op mode as the fourth Protoss commander, and the first non-Zerg commander to take the battlefield as a hero unit.

Alarak is a bit different from the previous co-op heroes, though. For one thing, he doesn’t have energy. His abilities are limited only by their cooldowns.

As for the abilities themselves, he has a charge attack that deals a large burst of damage to a single target, and a large column AoE that deals moderate damage and knocks enemies back a short distance. A tricky but very fun advanced tactic is to charge behind enemy lines and then use his knockback to push the opposing forces into the waiting arms of your army.

At level five, he unlocks a third ability with a much longer cooldown, Empower Me. This temporarily increases his stats based on the number of friendly units near him, and it can stack to some pretty insane levels. 600% increased ability damage is nice to have, let me tell you.

He also has relatively low health for a hero unit. Instead of a high health pool, he sustains himself by harvesting the life of other units. As in the campaign, killing enemy units will restore some of his health and shields, but when his health reaches zero, he’ll turn on his own units, sacrificing them to restore his own life.

This is obviously very much a double-edged sword. On the plus side, Alarak is completely impossible to kill as long as he has some units nearby — your ally’s units will not be sacrificed, however, so keep that in mind. He will always be the last one standing.

The downside is that if you’re not careful Alarak can end up tearing through your army faster than the enemy. The only control you have over this, aside from not risking Alarak unnecessarily, is to ensure you keep a strong stable of supplicants.

Supplicants are Alarak’s replacement for zealots. They’re ranged, can only attack ground, and spawn in pairs, like zerglings. They’re actually pretty weak, with minimal damage, but they’re crucial for one reason: They will always be the first unit sacrificed to restore Alarak’s health.

It is therefore crucial to keep a decent number of supplicants in your army at all times to prevent Alarak from sacrificing more valuable units.

Alarak’s other core gateway units are the slayer, a stalker variant, and the havoc. Havocs deal no damage on their own, but they offer powerful buffs to nearby units. They’re also detectors, which gives Alarak some of the easiest access to mobile detection in the game. At level eight, he unlocks ascendants, a powerful offensive spell caster that can sacrifice supplicants to restore their energy and continue casting.

A lot of Alarak strategies will hinge on robotics facility units, especially at lower levels. The vanguard is an AoE attacker that can be upgraded to do bonus damage to armored units, and the wrathwalker is a colossus variant that deals massive single target damage. Unlike in the campaign, the wrathwalker must be upgraded to attack air units.

Finally, the war prism is a warp prism variant that can also attack at range. You’ll need to keep a few of them handy at any given time to warp in reinforcements in the field.

Alarak has no permanent air units aside from the war prism. At level ten, he unlocks the ability to call down the Death Fleet, a squad of elite Tal’darim air units. But this has a short duration and a cooldown.

In case it isn’t clear by now, Alarak is a commander defined by great strengths, but also severe drawbacks. Between his charge attack and the burst provided by wrathwalkers and ascendants, he can demolish high priority targets like hybrids and capitol ships with astonishing swiftness, but his lack of air units or strong counters to mass enemy air can be problematic.

He’s also held back by a lack of map presence or support abilities. Many commanders have strong options to assist their allies, even when their army isn’t physically present, but Alarak’s only option is his Structure Overcharge calldown, which grants a temporary attack to any friendly building. It’s a powerful tool, but you need buildings in the area to use it, so its applications are pretty limited.

Alarak also requires a lot of micro compared to other commanders. I’d even go so far as to say he probably has the highest skill cap of any current commander. You’ll need to constantly babysit Alarak himself, and you’ll need to make sure your wrathwalkers are not wasting shots on irrelevant targets or else spamming your ascendants’ spells, and you’ll need to manage your war prisms so you can warp in reinforcements… Add to that the usual economic management and strategic decision-making that are part and parcel of the StarCraft experience, and you have an almost overwhelming amount to do.

For my part, I’ve been enjoying Alarak, but not as much as I’d hoped to. He’s an interesting commander — definitely unique — but he takes a lot of work, and while he can be quite competitive with other commanders, his power level doesn’t always feel high enough to justify all the disadvantages he has to cope with.

I’m also a little disappointed to see yet another Protoss commander so soon. Protoss now has four commanders to Zerg’s three, and Terrans’ two. Even as a mainly Protoss player myself, that doesn’t sit right with me.

Overall, Alarak is worth the price of admission, but keep your expectations managed.

Terrazine is a hell of a drug:

Alongside the new commander, 3.6 also included a new co-op map. Taking inspiration from Wings of Liberty’s Welcome to the Jungle mission, Mist Opportunities sends players back to the planet Bel’shir to once again collect terrazine gas, but with a twist.

Mist Opportunities showcases Egon Stetmann, the adorkable scientist first encountered in the Wings of Liberty campaign. After years spent alone doing research on Bel’shir and long-term exposure to terrazine, he’s… not himself.

Players must assist Stetmann by helping him harvest more terrazine to fuel his “research.” Periodically throughout the mission Stetmann will deploy harvesting bots that players must escort to and from the terrazine wells.

It’s a seemingly simple task, and it can be easy to be lulled into a false sense of security by easy early waves, but Mist Opportunities can be surprisingly challenging. The bots will spread out over a good chunk of the map, making it difficult to protect them all. You may need to split up from your ally, and maybe even split your own forces as well to cover them all. 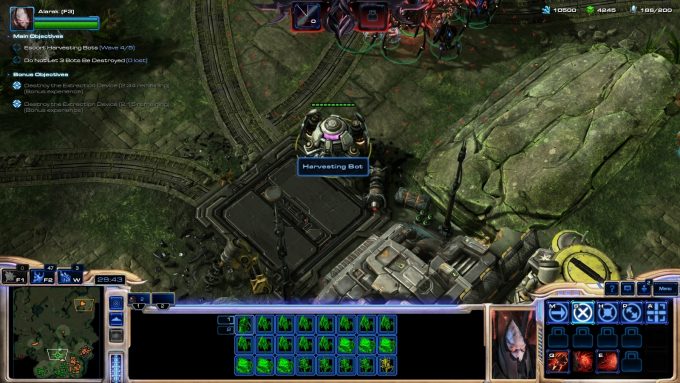 The bonus objectives also tend to spawn during bot waves, forcing you to divide your attention even further. It can get very hectic, and your ability to multitask will be put to the test.

It’s important to remember that enemy attacks can come at pretty much any point during the bots’ journey — you’re not in the clear once they’ve collected the terrazine — and that these attacks can come from anywhere. It’s entirely possible for attacks to spawn in the middle of the map, behind your forces if they’re out in the field. Keep a close eye on the mini-map.

The best commanders for Mist Opportunities are those with mobile armies and/strong map presence. Vorazun, Raynor, and Zagara will all excel here. Kerrigan and Abathur may also do well if they can make good use of nydus worms or Deep Tunnel. Karax, Swann, and Alarak will find it more of an uphill battle.

On the whole, I like Mist Opportunities a lot more than I expected to. While it doesn’t seem that different on paper, it definitely requires a different kind of strategy from the other co-op maps, and it’s pleasantly challenging.

I find the jungle aesthetic a little dull, but Stetmann is plenty amusing.The voice actor sells his terrazine-induced madness very well, and many of his lines are laugh out loud funny. I just wish he wasn’t quite so… strident when his bots come under attack.

Alarak is available for purchase at $4.99USD. Mist Opportunities is free to all co-op players.