Bless Online is the next big MMORPG we’re getting our hands on. The May 2018 Early Access date is quickly approaching, resulting in the plethora of MMO souls clamoring for more information. Is Bless Online worthy of a hype hashtag or will this be another game to safely ignore? No doubt fanbois and detractors will be at odds from now until the game’s final server closure. For the average Joe though, this is what’s worth looking forward to and what’s worth worrying over. 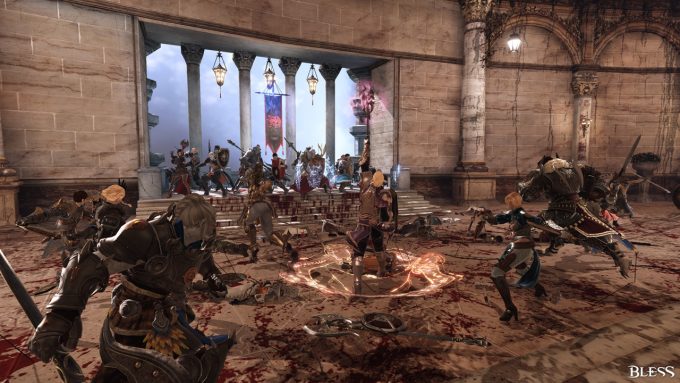 This happy medium bridges the gap between F2P and subscription and has turned out financial successes for Elder Scrolls Online, Guild Wars 2, and Black Desert Online. Regardless of what’s best for players, I do think this is the best model for Bless Online’s continued success. More revenue for the publisher and developer should translate to more content for players. Theoretically, it also means less scummy or spammy revenue generation tactics. Ideally, B2P results in fewer bots too. That’s been rather insignificant in my experience though.

In an interview with MMORPG.com, the developers of Bless explicitly stated there would be no loot boxes. There will be the standard fare selection of goodies such as cosmetics, advancement boosts, and mounts but nothing that’s currently on the commonly accepted MMO no-no list. Of course whether or not they stay more pure or descend into Black Desert’s P2W practices remains to be seen.

Truth be told, we don’t know exactly what Bless Online combat will look like when Early Access launches on Steam. The developers are really pushing a narrative of a full rework for the game so we can only guess what that will entail. Currently, it plays like something akin to the combination of Guild Wars 2, Revelation Online, and Black Desert Online. It’s action oriented but with tab targeting. It also feels clunky with limited build options, so I imagine that’s what they’re targeting to “fix” rather than radically alter core gameplay mechanics. For example, there’s a combo system in Bless Online but it feels about as interesting as a standard ability rotation in World of Warcraft. If active tab targeting is something you’re interested in right now, I’d recommend trying out Revelation Online to see if it’s worth getting hyped over. Revelation handles “classic” tab targeting combat exceptionally well.

At level cap, Bless alters progression from a strong vertical experience to horizontal advancement. Guild Wars 2 manages this fairly well, but I think there’s a lot of room for improvement. My hope is that Bless Online’s endgame will reward players who see the value in switching builds depending on the situation (a big deal for its PvP centric gameplay). This does mean the development team has to be on the ball with balance changes, and that’s not particularly easy even for seasoned veterans like Blizzard. I love this idea in theory, and greatly prefer horizontal progression to never-ending item level progression.

Apparently each of the game’s seven races will tell their own unique story. This reminds me of Star Wars: The Old Republic’s approach to storytelling. Reports from players on the Russia and Korean servers tell of a diverse questing system with a passable story. Whether this will translate well depends on localization efforts, but Bless Online seems to be going the distance by implementing full voiceovers. Good stories can go a long way for MMORPGs so if Bless Online succeeds here, they will be one of the few.

Tyler Bro and I tend place different values on solo player MMOs vs. group MMOs. While we see the merits of each side, there’s no denying the industry has catered more towards solo players lately. Bless Online seeks to change that with their party buffs. Depending on the makeup of a party, leaders can select one combat and one non-combat affect to apply to all party members. Whether these buffs will actually encourage group play in any meaningful way remains to be seen.

The merits of B2P are clear, but there’s a serious problem with the model. With so many substitutes in the space, it can be challenging to convince friends to pay for and pick up yet another “MMO with potential”. My general preference now is something akin to Guild Wars 2 – a limited free experience and introduction to the game with enough gameplay to get players hooked.

If you want to avoid PvP at max level, you are going to have to pony up regularly for a cash shop item. I doubt it will be too expensive, but it’s a noteworthy additional cost. Additionally, the game will clearly be designed with PvP in mind so PvE players may find content updates more lacking than something like the well-balanced Guild Wars 2.

Bless Online is pushing a heavy PvP narrative, promising 100vs100 battles. That sounds great with the exception of no MMORPG has ever balanced a two faction system, which Bless will be using. Inevitably one side pulls ahead on a server and draws players who crave to winning. Games like Aion that have rewarded players on the “losing side” still haven’t succeeded in a truly balanced experience. I’d argue Dark Age of Camelot during its peak has offered the best massive scale PvP, and it did so primarily because with three factions, two of them can also gang up on one if the one pulls too far head.

The biggest concern is that we’re hinging a lot of hype on Bless Online’s ability to radically alter their combat system. As I mentioned above, combat right now is not a strength of the game. Fighting enemies feels rote and mundane. While quests offer diversity more than most F2P MMORPGs, they still lag behind immersive offerings such as Elder Scrolls Online and World of Warcraft. Bless Online did post about key changes last Tuesday, but the new dynamic combat system is suspiciously sparse. The The lack of concrete gameplay videos showing these massive overhauls with a month left to go should be concerning to anyone that’s followed an upcoming MMORPG before.

My recommendation is to avoid the hype trap but continue following the game. Bless Online could develop into a worthwhile experience, possibly even as soon as the Early Access launch. It’s just that MMORPGs are notorious for missing the mark, especially at launch.