I like playing alternate characters. In fact I play alts so much the concept of a “main” in my case is nebulous at best. Bouncing around between different characters with different playstyles and aesthetics keeps MMOs fresh for me. 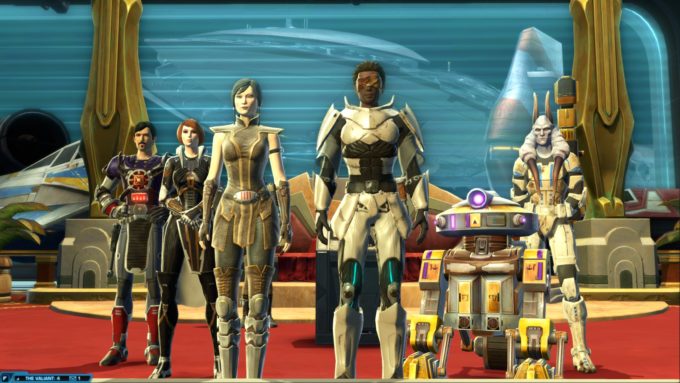 Yet always I’m left with the feeling that playing alts is a case of swimming against the current. It’s something nearly every game allows, but which very few actually encourage. It’s never been viewed as a valid playstyle worthy of its own content and systems in the way PvP or raiding might be.

In most games, playing an alt means repeating the same content, doing all the same grinds, and getting nothing to show for it. At best some games are now offering a certain degree of account-wide progression — such as how mounts in World of Warcraft and Elder Scrolls Online are shared across all your characters — but for the most part playing alts still means starting over from scratch, and there’s almost no reward for it.

Why must this be so? If you’re putting in two or three times more effort, why not get at least some reward for it?

I’d even argue that there is a certain degree of skill required to maintain a stable of alts. You need to not only learn all those disparate mechanics but remember them as you continue to swap between them. I have found this is a skill that can be improved with practice — I’ve played so many classes across so many games that I can now pick up new playstyles and rotations almost immediately.

Now, I’m not saying that alts requires more skill or is otherwise superior to other playstyles. But I think you can convincingly argue that it doesn’t deserve to be the red-headed stepchild developers seem to treat it as.

So how can we properly support alt players?

The first thing alts need is some variety in the leveling path. These days far too many MMOs make every character take the exact same path to level cap. Alts are much more appealing when there are multiple leveling paths. Some games offer differing content based on race, class, or faction, but I’d like to see more games vary the leveling experience based on choices made after character creation.

Global level-scaling is also a good way to add variety to leveling, as it gives players more flexibility on where to go and what to do.

Next, at least some degree of account-wide progression is a must. Sharing cosmetics across characters is a good start, but more can be done. For instance, gear could become account-bound rather than character bound, allowing your alts to inherit hand-me-downs from their forebears.

But all that only makes alts less of a chore. What the genre really lacks is games where alts are not only tolerated, but encouraged. Alts have the potential to be an endgame unto themselves.

The best example of this I can think of is how the original Guild Wars allowed players to use their alts as NPC hirelings, though that was largely a cosmetic feature. Star Wars: The Old Republic also has some perks for altoholics. In that game, reputation is usually gated by daily quests, but gains are shared across all your characters on a server, so the more alts you have, the more quests you can run and the faster you can earn rep.

Those are all good ideas, but I think more can be done. Imagine, for example, a game wherein classes are highly specialized, but you can swap characters on the fly. The more characters you have, the more versatile you are, and the more you can accomplish. You might change characters multiple times in a single dungeon to best counter the challenges within.

That’s just one idea. Undoubtedly professional game designers could come up with others.

I’m not saying that every game needs to encourage alts. Not everyone wants to play alts, and variety is a good thing to have. But right now alt play is an under-served niche. The genre would be enriched by at least one or two MMOs where playing alts is not only welcome, but the best way to play.

How would you make alts more rewarding?

3 thoughts on “Build MMOs for More Alts, Not Less”