If there’s one key differentiator between MMO games and other genres it’s that character skill trumps player skill. Even in games with MMO-style meta progression systems like some MOBAs and FPS games, player skill will win out in all but the most unbalanced systems (I’m looking at you Star Wars: Battlefront and the Han Solo pistol). In MMOs, a level 20 character is straight up better than a level 10 character. There’s no way around it, and if there’s PvP involved then the lower level character better hope they don’t cross paths.

This is born out of the MMORPG subgenre from which the broader MMO genre originated. RPGs are first and foremost about progressing a character’s prowess (regardless of what roleplayers and story lovers will argue). Taking agency out of the actual player’s hands is certainly fine. It’s much easier to balance an experience around well defined numbers than it is between players with disparate brain powers and reflexes. This ensures a proper difficulty curve for everyone that plays the game. The problem is that this creates a disconnect for players in what constitutes as skillful play.

In the absence of player skill, many gamers equate leveling or leveling speed to player skill. Thus, they shun games with auto leveling like Dragon Awaken. These same players may even argue that auto leveling is boring, while ignoring the trivial nature of leveling in the vast majority of MMORPGs.

One of many places the auto button appears in Dragon Awaken

Eve Online is one MMORPG that completely removes the player’s ability to impact leveling speed by relegating advancement to a real time system. This frees up the player’s time to engage in other activities without concern for progression. Unfortunately, most people who end up trying Eve find that “leveling time” just gets replaced with “money time”. Eve players then turn to assessing the fastest way to generate income, which is part of what turns Eve into a “spreadsheet game”. There’s more to the game, but it doesn’t change the fact that progression is boring.

Regardless of whether leveling is accomplished via play, in-game bots, or real-time advancement, it’s always pretty mindless when removing player skill. Thus, I think some element of player skill must be present even when character skill is paramount. A good example of this system in action can be found in Dungeons & Dragons Online. Each dungeon offers multiple difficulty levels that cater to casual solo players as much as they do hardcore groups. Rewards are commensurate with the challenge undertaken so choosing to up the difficulty is actually worthwhile. This exemplifies a key balancing element between mass market appeal and satisfying the loyal, hardcore niche. It’s also why we should feel comfortable calling certain games MMOs even most gameplay is instanced. Doing otherwise limits a developer’s ability to find creative solutions to age old problems. 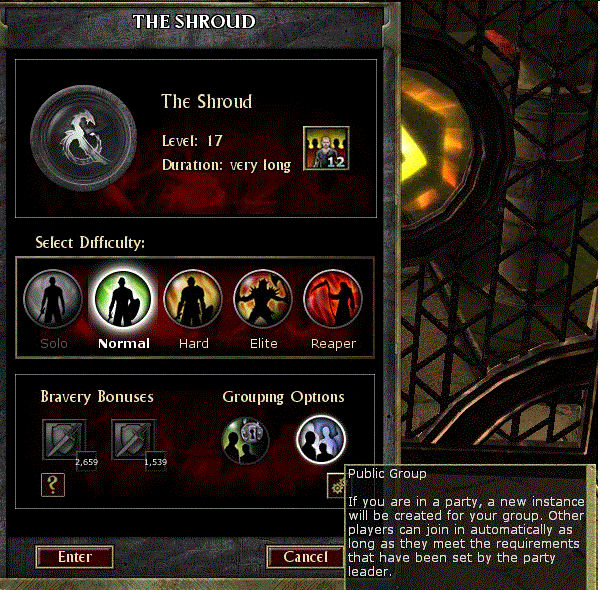 I tend to gravitate towards the idea that developers should incorporate fewer binary elements in MMO death penalties. One such element is the all or nothing aspect of experience points. Typically, EXP is only gained from completing quests or killing enemies. There’s no partial credit. This runs counter to games in other genres where win or lose, you’ll gain EXP. Bonuses exist in those games for winning or performing well, but there’s always advancement for just playing. This method frees up an alternate progression paths where failure is OK. As is, failure is not OK in MMOs. And that’s bad.

Ultimately, I believe a hybrid vertical/horizontal progression model works best for MMOs where failure can safely exist. I’ve talked ad nauseum about the greatness of horizontal progression many times so I won’t delve too far into this. Suffice it to say that a one-two dopamine punch of progressing both oneself and one’s character simultaneously is twice the hook of progressing only one. If that sounds up your alley, maybe check out Fractured or Crowfall. I really like the ideas these developers are putting forth to improve how advancement has worked in this surprisingly stale 20-year old genre.

Character skill comes in many forms – from absolute power to diverse options. Either can provide satisfying forms of advancement. Unfortunately, such advancement often comes at the expense of player agency. Many MMOs have tackled the issue in different ways, but I think very few have hit the mark. As time passes, I expect more MMOs to find a happy medium between the player and the character.

Where’s your perfect balance between the two?