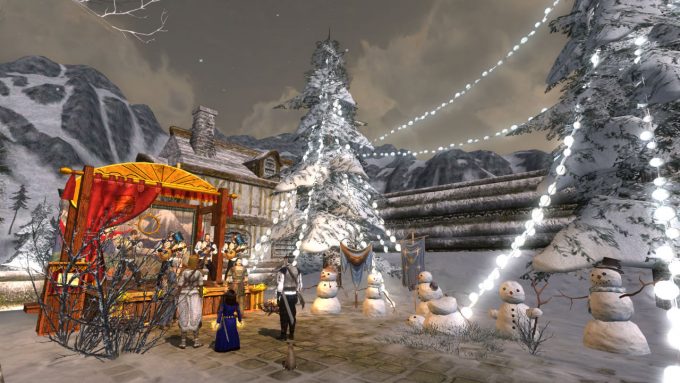 Read the following list carefully. What catches your eye?

Selection of popular MMOs featuring an event around Christmas

Did you notice something odd? Well, I did.

The amount of times the word “Christmas” is used is a whopping 0.

Granted, this is an incomplete overview of MMOs. But even when you dig through Massively OP’s extensive guide of last year, “Christmas” does not seem to be a popular choice of words. Out of a grand total of 51 MMOs (the definition is stretched a bit by including MOBA’s and mobile games), only APB Reloaded and Echo of Soul speak of a “Christmas event” – the first is a Grand Theft Auto-style shooter game and the second I frankly had never heard of before.

Apparently, there’s a huge demand for Christmas events – every big title has one, after all – but MMOs avoid the word “Christmas” like the plague. We’ve arrived at the main scope of this article:

How do game developers implement Christmas in MMOs? Why are Christmas inspired in-game events never referred to as “Christmas”? Which traditional elements are incorporated and which are left out?

The obvious element missing from in-game events is “Christ”. Indeed, when you look at the content of MMO “Christmas” events, all elements of Christianity have been removed. There are no angels, no Christmas carols, no stars, no crosses, no nativity scenes. While you might regularly encounter these symbols in the real, offline world (even if you are not religious yourself), the online game world is completely devoid of them.

My guess is that not using any religious elements is a conscious decision to keep events inclusive for everyone. Nobody wants to take the risk of upsetting someone by adding controversial elements. 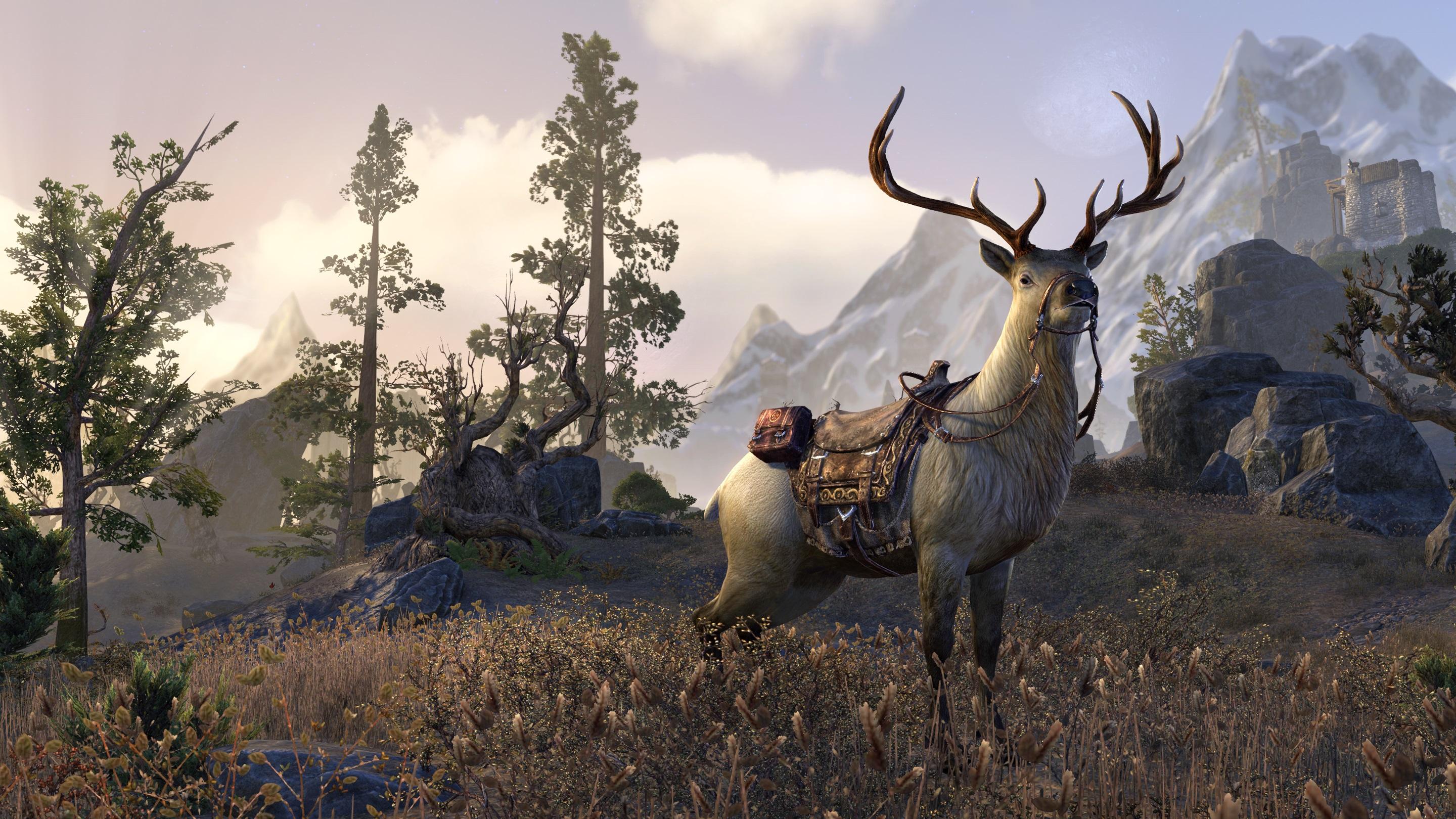 But how do we then set the holiday spirit in MMOs?

A quick look through the MMO scape provides the answer: by implementing a selection of non-religious Christmas elements into the game.

(Note that this top 5 is based on a broad guess after studying the use of Christmas in roughly ten MMOs. I did not track down all elements for all MMOs because that would be a huge undertaking. These elements, however, clearly occurred the most overall.)

The result is a unique blend of elements within each MMORPG. Which elements that are, depends a lot on the MMO’s setting and tone. You can make out three general categories.

MMOs in a sci-fi setting have the hardest job translating Christmas to something that fits within their lore. Futuristic space simply doesn’t vibrate “homely” and “winter” without some help. Star Wars: the Old Republic (SWTOR) celebrates Life Day, a wookiee event that was introduced to the fandom with the Star Wars Holiday Special. Revolving around family and the renewal of life, Life Day has a lot in common with Christmas. During the event, sparkling holotrees on the Fleet set the right mood. In a way, they represent a futuristic version of the wookiee Tree of Life. 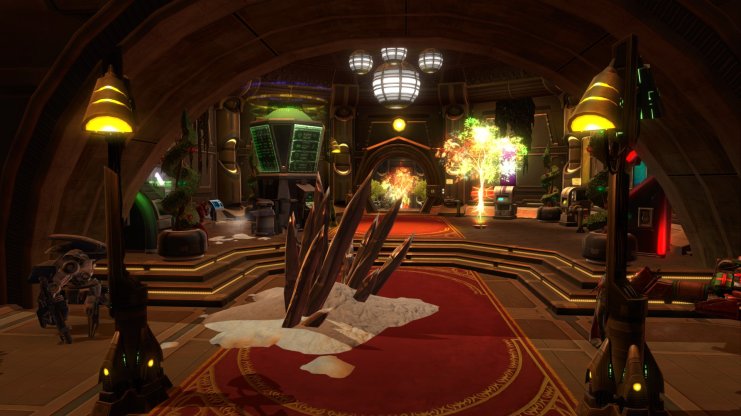 I chuckled when I found out Star Trek Online (STO)’s creative solution to the problem: Q’s Winter Wonderland. Q, the well known omnipotent and unpredictable character that first appeared in The Next Generation, is truly the only person that would get away with something so silly in the otherwise serious Star Trek lore.

Lighthearted MMOs that allow for more out of character content, tend to go all out with American Christmas related elements: Christmas trees, presents, Santa hats, reindeer antlers… even glowing noses that you can stuck on your character (EverQuest). Whether you love or hate it, these Christmas events often distinguish themselves by an abundance of pop culture references. World of Warcraft (WoW) players, for instance, can get a Red Rider Air Rifle: a variation of the famous gun featured in the 1983 comedy A Christmas Story. Pop culture references are typical of WoW, and their Christmas event is no exception.

These MMOs also often feature a Santa like figure with a twist. EverQuest 2’s Santa Glug (a goblin in a Santa outfit), EverQuest’s Santug Claugg (an ogre dressed in red) and SWTOR’s Master of ceremonies (a bearded old guy dressed in red) are examples of this. WoW players can get a “Santa’s Helper” miniature gnome.

More subtle are satirical views of the commercial side of Christmas, such as present in Wildstar in EverQuest 2. In the latter, a quest called Saving Frostfell invites you to save the spirit of holiday by destroying a factory. These meta references are, however, rare. 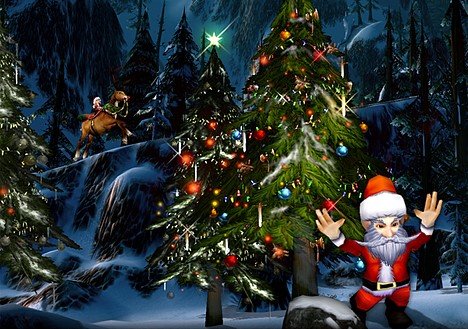 Fantasy MMOs that heavily rely on realism and immersion generally avoid the more modern aspects of Christmas. An electrically lighted Santa flying through the air on his sleigh would be terribly out of place in, say, the Elder Scrolls Online (ESO), after all. More subtle references like cosmetic warm winter clothing and elk mounts prevail.

High Fantasy MMOs often try to give the event a pagan, pre-Christian touch. Many Christmas symbols, such as the Christmas tree, have their origin in pagan festivals that celebrate the renewal of life (Yule). This is apparent in the naming choice: Lord of the Rings Online (LOTRO) has a Yuletide Festival, Rift celebrates Fae Yule and ESO New Life.

Another tactic is the implementation of more intangible concepts such as the Christmas spirit. LOTRO has a Dickens inspired theme going on in its Winterhome town. Players are invited to side with either the poor or the mayor who exploits them. Siding with the mayor yields better rewards, but can you live with being ruthless? Helping the poor or assisting orphans are recurring motives in several MMOs.

Looking at all these Christmas inspired events, the shared characteristic is that they try to invoke a nostalgic or cheerful atmosphere that provides a break from normal in-game activities. Game developers carefully select elements that fit within the in-game world lore-wise. Without exception, they play it safe: no references to religion are made, apart from pagan name elements that are used to give a exotic favour. Since many Western MMOs are being developed in the US, inspiration is mostly drawn from the American Christmas tradition (incidentally, as someone living in the Netherlands, references are often lost to me). The overall intent is to make us enjoy and there’s no denying that that fits perfectly within the Christmas spirit.

4 thoughts on “Christmas Without “Christmas” in MMORPGs”