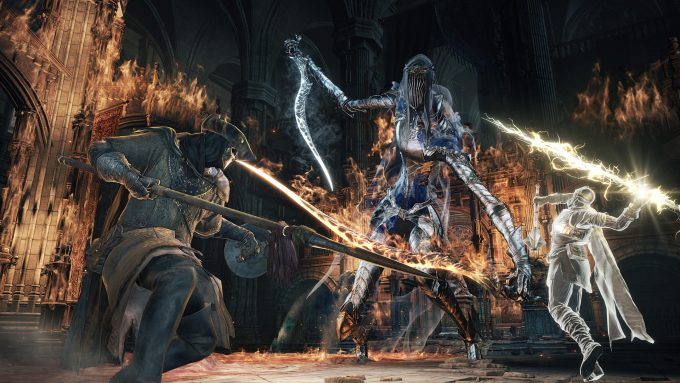 No, I’m not announcing a Dark Souls MMO, but the popular series has all the makings to deliver one. It’s hard for me not to dream about it when both the series and genre are so dear to me. Sure, the group sizes aren’t very large, but the game already feels interactive on a broad scale. Players can view messages left from hundreds of thousands of players. Covenants represent play types from cooperative to self challenging to murderous. All walks of life can be found in the multiplayer arena that is Dark Souls. In fact, I’d almost argue that Demon’s Souls, the precursor to Dark Souls, qualified. The World Tendency provided a persistent nature that almost hit the mark. It wasn’t quite there though. So how do we get from Dark Souls to Dark Souls MMO?

OK, OK, I’ll take a step back. Not everyone is familiar with the unforgiving action RPG that is Dark Souls. For those warded off by high degrees of difficulty, gamers cling to this series for good reason. It’s not just the difficulty that makes Dark Souls the series that it is but a combination of several elements.

The combat is probably the biggest fun factor. As opposed to the frantic button mashing or combination attacks of other action titles, Dark Souls slows down the pace considerably. Positioning and patience play a huge role in the combat. Striking at the right moment, timing dodges, and managing stamina will carry the day over one’s foes. It’s a surprisingly unique system that may find difficulties in an MMO setting because of how detrimental lag is for it. The best way to limit lag is following the heavily instanced route a la Warframe or Dungeons and Dragons Online. Instances of up to 16 players should be easy to pull off, but past that we’re risking slowdown (both of the client and server variety). Additionally, Dark Souls can feel pretty chaotic with just 6 players so I can’t see too much more adding anything beneficial.

Part of what separates heavily instanced MMOs like Destiny, Dungeons and Dragons Online, and Warframe is the use of hubs. This gives players an opportunity to feel connected with the whole word. Hubless games like Diablo fail in this aspect so the game feels less like a virtual world. Personally, I loved the Firelink Shrine from Dark Souls II. The radiant sunshine provided a safe, if brief, respite from the rest of the broken world. Seeing it with dozens of players to interact and trade with might be a bit much. This could prove detrimental to the atmosphere of which Souls fans are accustomed. In my opinion, the best route to offset a friendly hub is with opposing covenants.

Covenants would need to play a large role in any Dark Souls style MMO. Souls games are known for having several unique covenants (basically factions) with different emphases such as cooperative, offensive PvP, defensive PvP, and solo PvE styles. What separates the current batch of Souls games from a true fantasy MMO is how these covenants would play into the bigger picture. Right now, with the way covenants work, people only care about how their current covenant affects them. There’s no real collaboration with members of the same covenant and no real animosity towards what are essentially opposing covenants. There’s not even allegiance to a single covenant because acquiring all spells, weapons, and items usually necessitates switching. That would need to change in an MMORPG version. Covenants need to affect the game world itself in some significant manner.

World Tendency from Demon’s Souls is a good place to start. World Tendency slowly moves towards White World Tendency or Black World Tendency. This changes the accessible areas, difficulty of enemies, and appearance of both friendly and hostile NPCs. Essentially, good things move tendency towards white and evil things move it towards black. It’s actually a really cool system, but because Souls games are primarily solo experiences it could make accomplishing certain achievement based tasks rather frustrating. As such, many played in offline mode so other players couldn’t affect their World Tendency. Going back to covenants, an MMO designed around shifting world states based on covenant member actions would make for an extremely interactive and unique experience. Even simple things like the sun grower brighter or dimming based on cooperative Sunbros would dramatically enhance immersion.

The covenants and basic interactions themselves would need to change to accommodate a true MMO experience. Instead of summoning players with white soapstones, missions would generally begin with a full party. Invading mechanics would change to allow for group invasions. Location based summons could still help (expanding max party size) or hinder (expanding max invaders) to make key levels more interactive. Changes to the typical system would mainly be centered around grouping more easily with friends (an important part of MMORPGs), affecting the world for everybody, and balancing levels for group play instead of solo play.

World states, updated covenants, and hubs would help elevate Souls to MMO status, but it ignores a subtle interaction that already exists – lore. Lore plays a role in the game’s meta-interaction. Much of the history in Dark Souls is hidden or subtle. It’s so much so that players band together to share details and thoughts. Key details about plot and lore are found in the background or in item descriptions. Typically, these items are found in static locations. In a Dark Souls MMO, I’d like to see them appear more dynamically. Maybe it could even tie into covenants, with a boss’s loot table changing depending on the player. 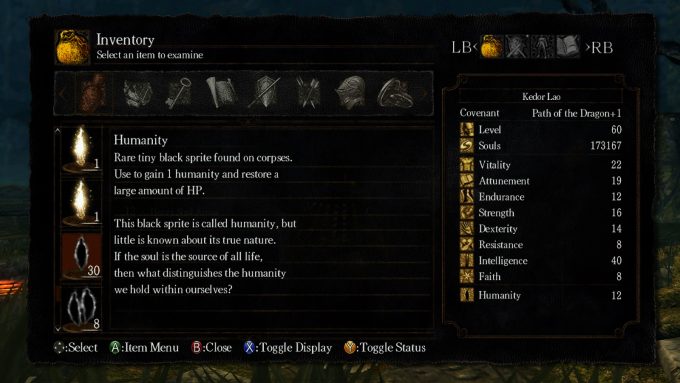 Lore must continue playing a large role in any Dark Souls styled MMO. What’s really cool about an MMO version is that frequent updates could gradually reveal more to the player base. Instead of putting out everything at once, the developers could get even more intricate with stories. Adding lore oriented content as players discover all of what’s currently available gives players yet another reason to interact.

Dark Souls is a game series that is near and dear to my heart. MMORPGs are a genre where I love to see new things. Combining the two would make for an almost instant buy, even if the game wasn’t technically a FromSoft Souls game. I think it could really work, and I honestly believe the above recommendations serve as an outline for success. In my opinion, all of it is required to maintain the series’ theme and still deliver an MMO experience. Now, I can only wait and see if my dreams come true.