Insomuch as I put any faith in the Bartle player types (which is to say not very much), I self-identify as an explorer. I play online games because I like exploring imaginary worlds, and MMORPGs are arguably the best way to do that. 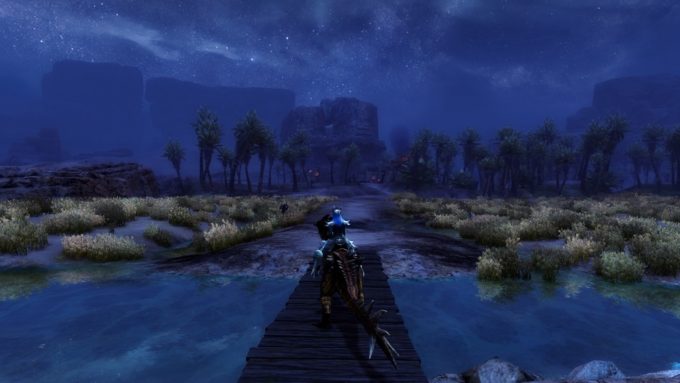 The Search for New Frontiers

At the end of the day, what the explorer seeks is new experiences. But that’s harder to achieve than you’d think.

Once you’ve seen a dungeon, or done a quest, or taken screenshots from atop a beautiful vista, it’s not new anymore. Then it’s time to move on and find something else wondrous to discover.

For this reason, a game that wants to provide satisfying exploration needs to have a lot of content. There needs to always be something new on the horizon.

But to meet that level of quantity, you have to cut corners. Few if any MMO developers have the resources to provide an endless supply of novel experiences, at least until the day player-generated content becomes mainstream. Thus, they often turn to cookie cutter design.

Guild Wars 2 and Elder Scrolls Online are both games I view as prioritizing exploration as a playstyle. Both offer a wealth of open world content that is largely non-linear in presentation. In both games, you can set out in any direction and find something interesting to do, and at first, I loved the sense of freedom that offered.

But with both games, I eventually realized how formulaic the content was. Each zone provides largely the same activities presented in largely the same way. The sense of exploration died as it became clear I was merely repeating what amounted to the same content endlessly reskinned.

The ultimate example of quantity over quality exploration would be procedural generation, which can produce massive worlds or even universes, but cannot achieve true artistry save by chance. A program is never going to able to consistently design beautiful art or memorable story-telling the way a human can.

At the other end of the spectrum, you can choose quality over quantity. You can carefully curate the content players experience, making each quest or dungeon unique and memorable. This keeps new content continually fresh, but it tends to lead to a lot less content being produced, and it often (though not always) makes for a more linear and restrictive experience.

An extreme example of this design philosophy might be SWTOR’s recent expansions. They’re high quality, and each new chapter feels exciting to play the first time, but it’s an incredibly on-rails experience. There’s no sense of liberty or player agency.

I don’t think there’s anything that’s going to quite solve this problem. Not entirely. The struggle of quality versus quantity will always be there. It’s up to each developer to strike the right balance for each game.

With that being said, I think there is something that can help, and that’s adding depth to content.

There’s a tendency nowadays to make open world game design akin to a checklist of chores. You get a bunch of icons on the map representing activities, and you try to tick them all off. There’s nothing wrong with that per se, but there should be more.

Stick hidden side quests in out of the way locations. Design areas off the beaten path that have no purpose other than to be pretty, or to add to the texture of the world. Put in hidden areas with random caches of loot.

In all honesty, one of my favorite memories of playing Guild Wars 2 was of finding a patch of strawberries hidden in out of the way place with nothing to lead you there. It made the world feel very real.

And don’t let the world stay static. Add new things, big and small, to old zones. Perhaps even without mentioning it in the patch notes. Just the knowledge that there’s a chance to find something new in old areas will completely change the feel of a game.

At the end of the day, good exploration design is about giving players the impression there’s always the potential for something amazing around the next corner. Even if it’s an illusion.