For Honor is the latest buzz-worthy title from Ubisoft, promising intense competitive action against a brutal Medieval backdrop. In the lead-up to launch, they held an open beta event, and I dove in to see how this latest entry in the online PvP field stacks up.

For Blood and Honor

Providing For Honor impressions requires taking a step back just to define the game. It incorporates elements of MMOs, RPGs, MOBAs, and fighting games, but it doesn’t exactly fit into any of those genres.

Its basic premise is an ongoing conflict between three factions: Vikings, Samurai, and Knights. You must pledge yourself to a specific faction, but oddly this doesn’t affect your choice of class. You can, for example, play a Knight class even if you’re sworn to the Samurai. I suppose it helps keep things balanced.

There are three classes per faction, and it seems each can be customized a fair bit, both visually and in terms of gear and stats. Some are gender-locked, though, which is a bit off-putting.

For Honor does feature a single-player story-mode, a decision I salute given how many similar games have neglected this feature (looking at you, Overwatch), but the beta only included competitive modes, so I can’t comment on its quality.

The heart of For Honor is its unique dueling-focused combat system, which utilizes combos, counters, and multiple angles of attack to create a very deep and challenging experience. 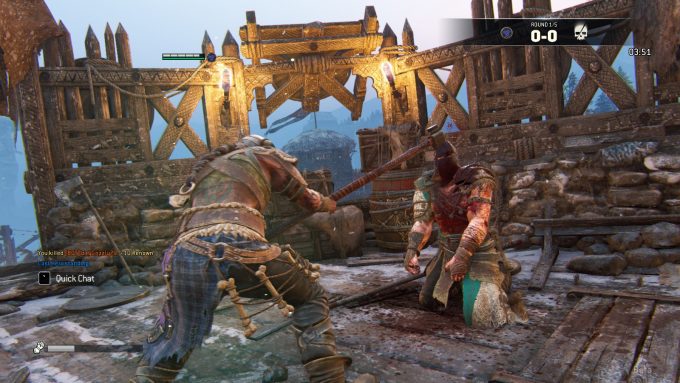 If you’ve played Age of Conan, For Honor’s mechanics may feel familiar. You can angle your weapon to the left, the right, or above. This will block attacks from that angle, but also prevent your own attacks from getting through as long as your enemy’s stance is focused the same way.

This makes combat into something of a cat and mouse game where you are constantly trying to exploit your enemy’s weaknesses without exposing yourself too much at the same time. It rewards a deliberate style of play, but it’s also quite fast-paced, so you need to be able to think fast.

You can also guard-break an enemy to get in a few free shots — though there are counters to this — and each class also has access to some active skills that are unlocked as you gain experience throughout a match — much like a MOBA. Some game modes even have swarms of weak AI minions to farm for XP, strengthening the MOBA feel.

But this barely scratches the surface of the incredible depth of the combat system and its various combos, counters, and abilities. When I first started on For Honor, I thought the tutorials were incredibly thorough and had covered everything I could possibly need to know, but it quickly became clear they were only the most shallow and basic introduction to the game’s mechanics.

I’ve been gaming for a long time, and For Honor is honestly one of the hardest games I’ve ever played. It took me a fair bit of practice just to be able to survive basic training scenarios against the AI. The sheer number of different combos and interactions across all the classes is staggering. 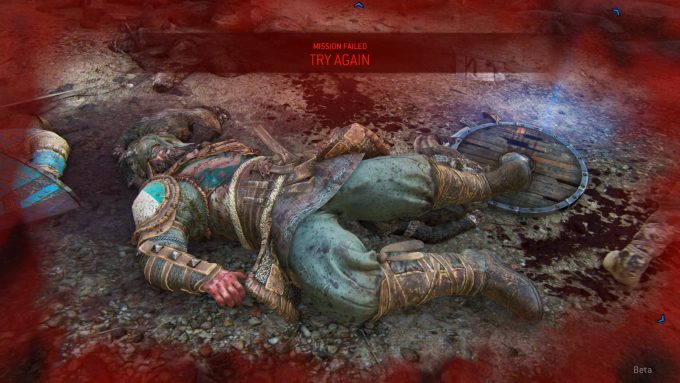 This image pretty much sums up my experience with For Honor.

Unfortunately, I haven’t been able to experience much of the game’s PvP thanks to frequent crashes and disconnects. On the odd occasions the servers did cooperate, I was once again slaughtered quite handily.

On the rare occasions everything aligned and I was able to best my opponent, I found it an incredibly satisfying experience, but that’s not something that’s going to happen often when you’re still new to the game.

That same complexity applies to its meta game, as well. While For Honor focuses on small scale matches — including duels, deathmatches, and a point control mode called Dominion — it all feeds into a massive territorial war between the three factions. A video explains the mechanics of this when you first investigate the game’s multiplayer, but it dumped so much information on me so fast I failed to absorb any of it.

While I spent much of my time in For Honor being frustrated, I nonetheless developed a high opinion of it, at least from a certain perspective. It’s extremely challenging, but it doesn’t feel cheap or unfair, and I greatly admire its depth and complexity.

However, I do think it will only appeal to a specific type of player.

Let me be clear: For Honor is not a game you can just jump into and play. I do not think there can be such a thing as a casual For Honor player. 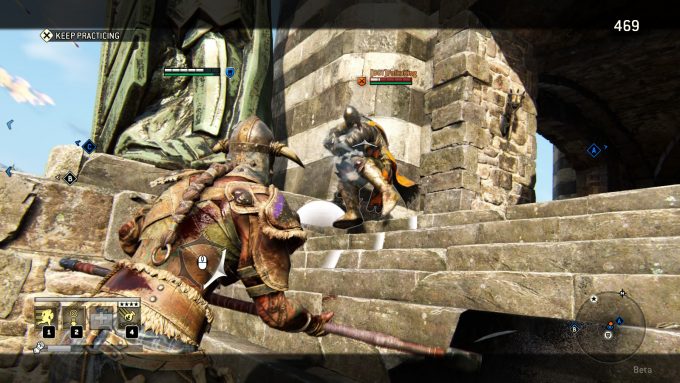 This is a game that will require hours of research and practice in order to achieve even a basic level of competency. You will have to pay your dues.

For those who are willing to put in the time and effort to “git gud,” I think For Honor will prove an incredibly rewarding experience. I could also see it being a strong contender as an eSport, depending on what kind of community it ends up having. I think a duel between two highly skilled players could be thrilling to watch.

But for those of us who don’t want to put that much effort into a video game, For Honor will likely never serve as anything but a source of frustration. It’s an excellent entry in its niche, but that niche may end up being rather narrow.

I come away with two totally different yet not incompatible opinions. As a student of game design, I love For Honor. As a guy who plays video games for fun, I don’t like it at all.