“I myself merely play female characters sometimes, and many times when I’m on those characters, people assume that I am a woman in real life,” he wrote. I blinked. It was a casual comment in an article that was about something else entirely, but it sparked a thought. You see, Larry Everett’s experience is very different from my own.

“That’s awesome!” I found myself thinking. “Seriously, you are playing a female character and you’re actually addressed as a woman?! People should realize how special this is.” I also thought (because I’m an imperfect human being, like everyone else): “Ha! Now you know what it feels like!”

All my characters are female. However, when typing to strangers in MMOs, 9 out of 10 times they (incorrectly) assume I am male. Now I’m not having sleepless nights over this (which is a good thing, or I’d have developed insomnia), but it does get old pretty fast. I asked other female gamers I know and they reported the same phenomenon. 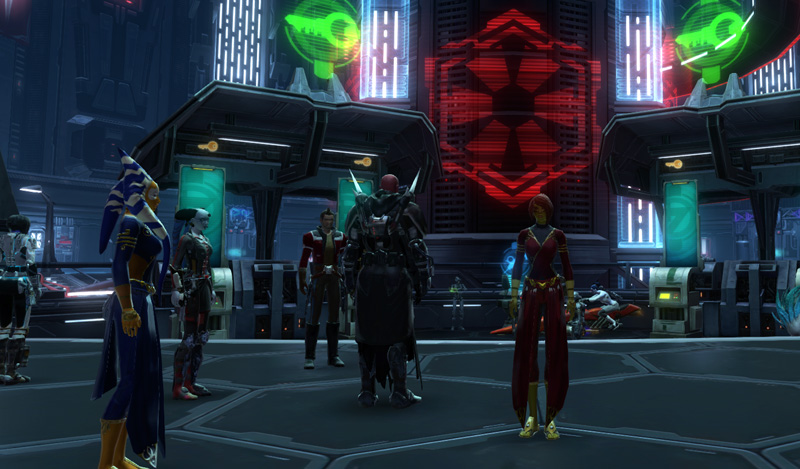 Player avatars hanging out in the central hub in Star Wars: the Old Republic (SWTOR)

It is striking that Everett’s experience and mine are so different  – especially considering we play the same MMO, Star Wars: the Old Republic (SWTOR). It could be that this is partly due to our perception: we are more likely to remember instances in which other players guessed it wrong than in which they guessed it right. But perhaps there’s more to this.

Game scientists have conducted research on the perception of gender in virtual environments. Although there is no data on how often we address others with a certain gender, there is evidence that certain factors affect how we perceive others.

What we do affects who we appear to be

It is possible that gender perception varies depending on our choice of activities in-game. A study from 2010 shows that game genre influences our perception of other players’ gender (Eden et al. 2010). We are more likely to perceive players as male when they’re playing games that are competitive and aggressive (such as shooters) – traditionally masculine associated traits. On the other hand, players are more likely assumed to be female when playing games that are social in nature. It is interesting to note that no relationship between skill level and perceived gender was found.

Although this research focused on gamers playing different game genres, you could extrapolate that the same goes for in-game activities. Perhaps players are more likely to expect male players when taking part in competitive and more aggressive environments such as PvP MMOs and raiding endgames, while they are more likely to expect female players when taking part in social activities, such as role-play. If this is true, it would explain why I’m often assumed to be male – I spend the majority of my time in-game playing endgame.

What we look like affects who we appear to be

Another study found that the degree of masculinity or femininity of an avatar significantly influences perceptions of avatars (Nowak & Rauh 2005). While this study deals with web avatars rather than avatars within multiplayer games, I don’t think it’s unlikely that the same goes for the latter. Judging by his article, Larry Everett spends a lot of time role-playing on his characters (some of which are female) on the fleet, the central player hub in SWTOR. This could explain why he does get addressed as female from time to time. After all, when role-playing, people will be more attentive to character appearances than when you are rushing through hordes of mobs with a pug. In instances where little to no attention to character looks is given, we might be inclined to go with the male default instead.

What we expect affects who we appear to be

Historically, gaming has been the realm of men. Indeed, gaming as a pastime is still associated with boys, violence and masculinity (Bryce & Rutter 2002). You could argue that the tendency to address all players as male is a relic of past times, wherein the vast majority of gamers were male. However, speaking from personal experience, most players seem aware that the MMO populace is more varied nowadays. (A heads up: recent research by Quantic Foundry (2017) found that 16-36% of MMO players are female – varying on the MMO’s setting.) When ten years ago I logged into an MMO and strangers found out I was a woman playing endgame, they were flabbergasted. Now it’s more like “Oh, okay.”

So if most MMO players are aware that both genders play, why do we tend to address strangers with “he”? My guess is that it has to do with the persisting perception of the male gender as the default in modern western culture. Let me explain with an example outside of the realm of gaming.

A couple of years ago, I took part in a university course. At one point, a classmate of mine took the stage and gave a fifteen minute presentation about a paper we had read. During, she constantly referred to the author as “he”. This was awkward, because I knew the author was, in fact, female. She had an foreign first name that I did not recognize, so I had googled her the evening before to check. When the student was done, our teacher asked how she would feel if she had published an article in a well known magazine and a reviewer wouldn’t even have looked up who she was.

The incident showed me how disrespectful it is to regard everyone as male, because it radiates disinterest. I realized it could just as well have been me making that mistake if I would not have taken the extra time to research the evening before. For me, this moment was an eye opener and I decided to never assume a gender when addressing someone I don’t know.

Referring to strangers in MMOs

What about MMOs, though, where you can’t simply google a player’s gender? The only way to find out (apart from voice chat) would be asking. And asking can be intrusive because not everyone likes sharing their gender for various reasons (Fortim & De Moura Grando 2013).

Ever since the awkward class room experience, I’ve been more aware of prejudices regarding gender perception. Sometimes I notice I assume someone to have a certain gender because of the way they talk or behave in game. But then I remember my decision. When I write a blog post in reaction to somebody else’s and their blog doesn’t state their gender, I refer to them as “they”. And the same goes for MMOs, really. Chances are that when I use “they” when talking about someone else, somebody will correct me and then I know how to address them. And if they don’t and want to keep their gender private, that’s fine, too.

Some dislike the use of “they”. For them (har har), going by the character’s gender is a great alternative. It will mean that they’ll get it wrong from time to time, but hey, it might prompt gamers think about gender perception in MMOs for a bit.

Do other players generally assume you’re male or female in MMOs? How do you address strangers online yourself?

Fortim, I. and C. de Moura Grando, 2013: Attention whore! Perception of female players who identify themselves as women in the communities of MMOs. Digital Games Research Association (DiGRA) conference publication.

10 thoughts on “Gender Perception in MMOs”