I have a strange and complicated history with Guild Wars 2. Like a lot of people, I fell hard for the hype before the launch. Once I finally got my hands on the game, I played heavily for several weeks and had a great time… until I didn’t. 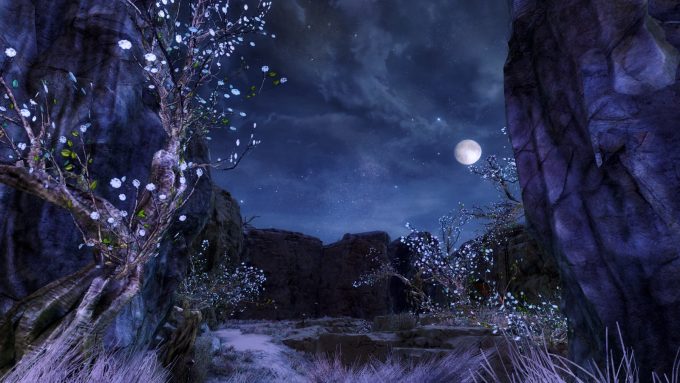 Part of it was how far the game had drifted from its original concept. Part of it was the lackluster story. For a variety of reasons, I fell out of love with GW2, and while I’ve revisited it a couple of times, I’ve never been able to recapture the magic.

Still, when ArenaNet announced a free preview of the second expansion, Path of Fire, my curiosity was ignited (hurr hurr). I decided it was time to give the game one more try.

I was also mildly irritated by the fact that you could not bring an existing character into the preview, but instead had to create a new one that would then be wiped. I suppose that’s to ensure this is truly a preview and not early access, but given how little content was available in the demo, I’m not sure I see the harm in letting people get a head start on it.

One interesting thing about this, though, is that I was able to make a revenant character despite not owning Heart of Thorns. Of course, in retrospect, diving into some relatively challenging endgame content on a class I’ve never played before may not have been the brightest idea I’ve ever had. There was certainly a learning curve, to put it mildly.

It’s very difficult to draw any conclusions about the story of Path of Fire. I haven’t played GW2 in a long time, so I have no context on what led to these events, and the amount of story in the demo is, again, incredibly small. 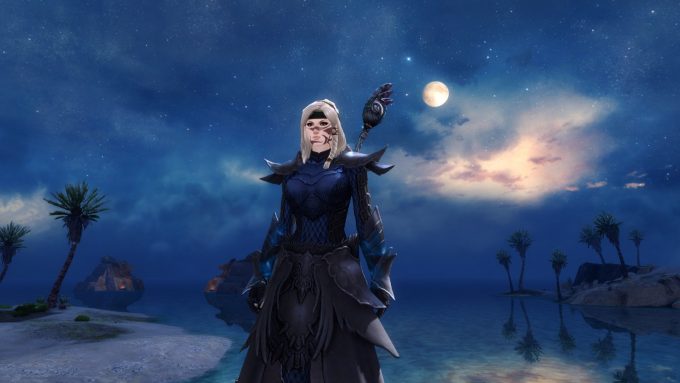 So take this opinion with a hefty grain of salt, but it seemed like GW2’s story-telling had improved in the time I’ve been away. None of the dialogue made me cringe at all, the villains seemed truly threatening, and the characters displayed some genuine personality.

In other words, it’s minimally competent, which is more than can be said for all the Guild Wars 2 story I’ve experienced up until now.

I noticed some interesting environmental story-telling, as well. In town, you’ll occasionally find fanatical servants of the new villain trying to radicalize desperate refugees. You have the option to call them out, sparking a brief fight. There doesn’t seem to be any significant rewards for doing so, but it’s a nice little bit of immersive story-telling.

I groaned inwardly when I found out that Path of Fire was focusing on desert zones, as deserts are one of my least favorite video game biomes (jungles being another). That said, though, my fears may have been unfounded. While some sections of the Crystal Oasis were a bit bland, mostly it’s a very beautiful and inviting zone.

The architecture, for one thing, is fascinating. There are pyramids everywhere, but ArenaNet seems to have resisted the urge to ape ancient Egypt as have so many other digital deserts. Instead, the pyramids and other buildings seem a strange mix of Aztec design, Arabic stylings, and some unique flavor all their own.

The Crystal Oasis is at its most beautiful at night. The skies turn into a riot of stars, and the whole landscape is lit in soft, gentle tones. But even during the day, it can still be a pretty zone. Guild Wars 2 has always had a fantastic art style, and there are times in the Crystal Oasis it feels like you’ve walked into some beautiful old oil painting. 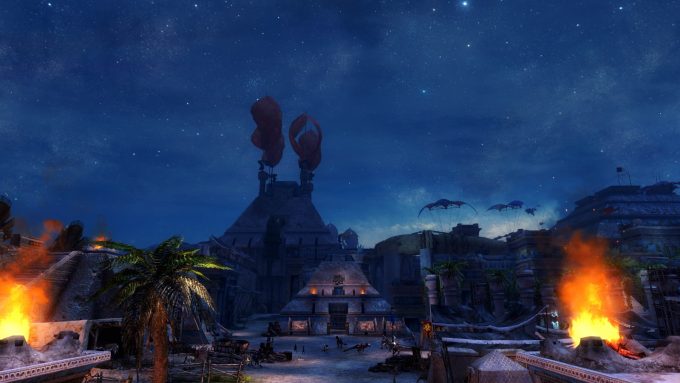 On the whole, Path of Fire leaves a surprisingly strong first impression.

As I delved deeper into the content, though, I started to run into some frustration.

For one thing, mob density in the new zone seems absurdly high. You can’t walk two feet without getting attacked by at least one or two mobs. Definite flashbacks to Orr. At one point I became trapped in one corner of the map for what felt like about ten minutes because I just kept getting jumped by more mobs faster than I could kill them all. It wasn’t even part of an event or any particular point of interest. It was just a random patch of sand that was for some reason guarded like Fort Knox.

There are a lot of wandering veteran mobs, too. Again, playing a class that was totally new to me can’t have helped, but I found them largely impossible to solo, and most frustrating was that a lot of them spam crowd control on you. This is something I always found frustrating about high level Guild Wars 2 content; who thought that being stun-locked by every mob you meet would be fun?

I was also reminded that death is strangely punishing in GW2 for what is ostensibly supposed to be a casual game. Waypoints are few and far enough between that dying can send you miles away and cost you a significant amount of time just to get back to where you were, especially if you need to fight your way through respawned enemies.

Finally, Path of Fire adds one new annoyance in the form of unidentified gear. In the new zones, new items drop as unidentified items and can only be used once you take them to a vendor and pay to have them identified. This is being sold as a way to make inventory management easier, but in practice it’s just a waste of time, and I deeply resent having to pay for loot I’ve already earned (even if the fee is admittedly quite modest). 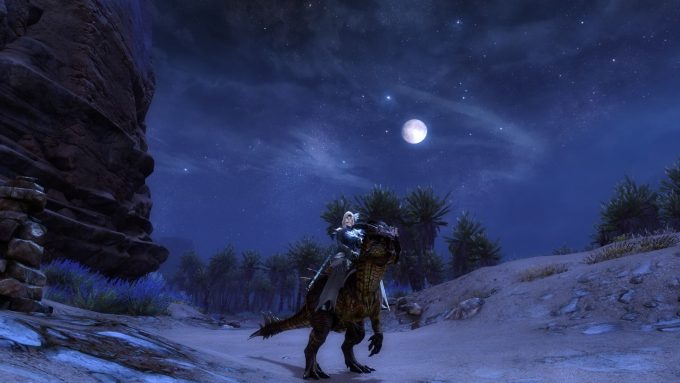 Of course, one of the biggest new features in Path of Fire — and one of the few available in this preview — is the addition of mounts.

For reasons that I’ve never quite grasped, mounts are a topic of incredible controversy in the Guild Wars 2 community. I think both sides of the argument have overblown things, honestly. I never saw any particular need for mounts in GW2, but I also never saw any real harm in adding them.

Having played with one, though, I think they’re a positive addition to the game.

Firstly, I like that you get your first mount almost immediately upon entering the new zones. Guild Wars 2 has always been good about not making you wait for the good stuff, and I’m glad to see that’s one element of the game’s design philosophy that hasn’t much changed.

As for the mounts themselves, they’re not just passive speed boosts. They also have special movement and combat abilities. The raptor mount including in the trial has a long jump that can be used to clear large gaps, thus allowing you to reach otherwise inaccessible locations, as well as a sweeping tail attack that allows you begin a fight with a nice burst of AoE damage.

The mounts themselves are also incredibly well animated and have a real sense of weight and momentum to their movements. It’s hard to explain, but they just feel good to pilot in a way that mounts of other MMOs simply don’t. Unfortunately, it seems some people are experiencing motion sickness while using them, but as someone without such issues, I found mounted play to be a real joy.

As a long-time MMORPG fan, it’s easy to be cynical about GW2 adding mounts. It can feel like they’re hyping a basic feature that dozens of other games already have. But credit where credit is due: Guild Wars 2 built a better mousetrap. I don’t want to go back to traditional mounts now. 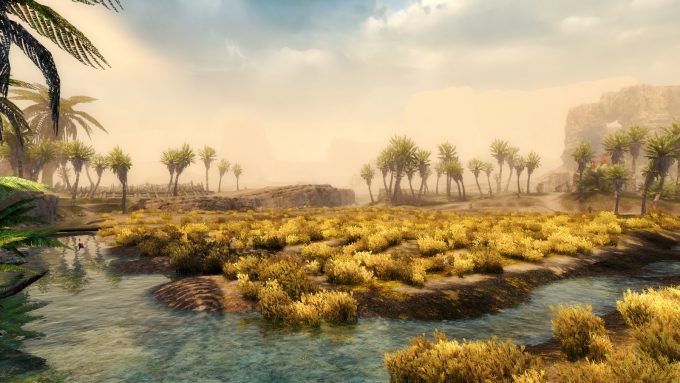 I’ve got to be honest: I went into this preview expecting and on some level perhaps even wanting to dislike Path of Fire.

And there are definitely some things about it that deserve to be criticized, and it’s not exactly a revolution that’s going to solve all the game’s problems.

But it also needs to be said that there’s a lot about Path of Fire that’s genuinely worthy of praise. Mounts are awesome. The new zone is beautiful. The story at least has potential. If it’s not reinventing the wheel, then at least it’s putting some sweet rims on it.

For me personally, and perhaps other people as well, it may still be too little too late to bring me back to the game, but at the very least, current Guild Wars 2 fans can confidently look forward to what’s ahead.