I don’t like grinding. I never have liked it. I wrote a blog post just last week deriding grinding. Yet the vast majority of MMORPGs insist on building the majority of their content around grinding in some form. Grinding takes the escapism and wonder that compels us to venture into a new MMO world and distills that experience down to a treadmill of numbers. But today I am going to defend it. Call it playing devil’s advocate, looking on the other side of the fence, indulging curiosity, whatever. By the end of this post you are going to see not only the merits of grinding in MMORPGs, but its prominence outside of the genre.

Grinding takes many forms and I want to be clear about my definition. In my opinion, grinding is the act of repeating a mindless task in order to progress your character in some significant way. Thus, grinding can range from running dungeons to killing creatures to completing quests. There are variants on the definition, but I don’t imagine mine feels too distant from others’. 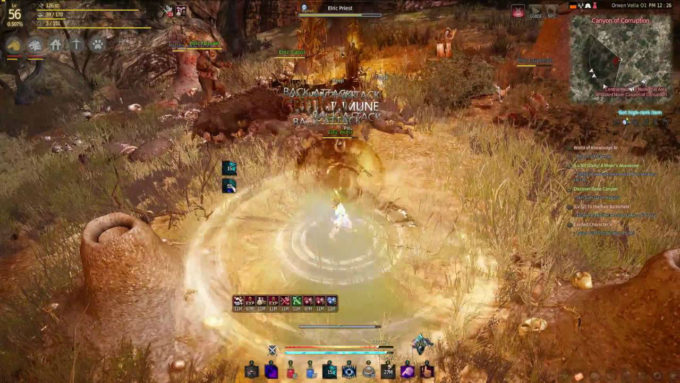 You don’t want to know how long it takes to get 1% EXP at level 56 in Black Desert Online.

The level of grinding in MMORPG certainly varies from game to game. Something like Black Desert Online has essentially an infinite grind. Progression in Black Desert takes hours, and then days, of dedication to killing the same enemies at high levels. In games like World of Warcraft, the grind at high levels is much less pronounced but is none-the-less part of the game. The highest quality content requires certain gear levels in order to reach. Players reach the requisite gear levels by repeating low threat dungeons for better drops. Now, in no way am I placing Black Desert Online and World of Warcraft in the same realm of grindiness. I just want to illustrate that it exists in a very wide spectrum.

One of the perks of grinding is that it’s easy to relax and zone out. It’s almost a form of meditation. Replace breathing in and breathing out with pressing tab and pressing 1 a few times. You can almost feel the zen calm washing over just thinking about it. Combat against menial creatures is purposefully simple, and it’s kind of the point. With meditation, the mind is occupied with some sort of repetitive task. This allows the person to peruse their thoughts gently and calmly. It’s meditation with a different focus point.

One doesn’t need to full on Buddhist monk to get the relaxing benefits on grinding. It can also be considered a form of decompression. You know how most people feel after maxing their brain’s capacity for a full day? Tired. Coming home from a long day doesn’t invite strenuous challenges. It invites seeking serenity. It’s not unreasonable to want to completely veg out after mental or physical strain. Grinding provides the means to do so.

Everyone can progress in a grind based system. If MMORPGs were to implement content that always came with the possibility of defeat, it would alienate some of the players. Grind based content ensures that as long as the game is being played then the player will be rewarded. A critical component of grinding is the significant length of time required to accomplish tasks. This time keeps the player around. It keeps the player playing the MMO. This is a win-win situation. Players are guaranteed advancement simply by playing the game and the developers to get to hold on to their player base.

Not all quests are grindy, but a quest grind is still a grind.

From a developer standpoint this kind of content is pretty easy to produce. Anything that can be repeated with low difficulty isn’t likely to raise a stink. Some trivial content doesn’t mean all trivial content though. The time developers save on easy content can be spent crafting memorable encounters. This is the price that the players pay for the top notch content. Filler content has to hold one’s attention in the meantime. This filler content makes up the bulk of MMORPG progression but can sometimes be at least hidden in a way that doesn’t make it too obvious. MMORPGs can’t really afford to lose players so they need some sort of hook to keep them occupied until they get to the interesting content. Grinding is that hook.

Similar to the rationale to the above paragraph, grinding serves to counterbalance the highest-quality content. Gameplay naturally has its ups and downs. If everything is crazy exciting than nothing it’s crazy exciting. So grinding is the low point of an leveling experience but is an important counterbalance to the high points. It helps you appreciate the work that you’ve put in and the content you’re rewarded with.

It’s not like grinding is really anything new to the gaming world either. Diablo and Diablo clones revolve the bulk of their game content around killing minions mindlessly to get progressively better loot. Survival games involve mining poor innocent resources to the point of exhaustion to…well…survive. Browser strategy games entangle the player in a endless cycle or building structures, waiting, then upgrading them or building more. Many other examples exist of games outside of MMORPGs that utilize grinding in at least some capacity.

The first Final Fantasy on NES tasked the player with powering up their heroes to save the world. In order to accomplish this, the player had to engage in multiple winnable battles to attain the necessary strength to defeat each boss. Similar gameplay to this 1987 title decidedly exists all over today. It’s just better concealed now. It means grinding has stood the test of time through no series of accidents.

Look, I’m really not saying that grinding is a great thing. It’s the type of content that after not too long pushes me back into playing single-player RPGs. It’s also easy to understand why some people do in fact like heavier grinding games. Grinding clearly has its place though and contributes positively to MMORPGs overall. Now who wants to kill a thousand goblins with me?