Blizzard Entertainment is currently running a free open beta for their hotly anticipated new sci-fi shooter, Overwatch, which is due for release later this month. It’s shaping up to be a strong PvP game… but that’s all it is. 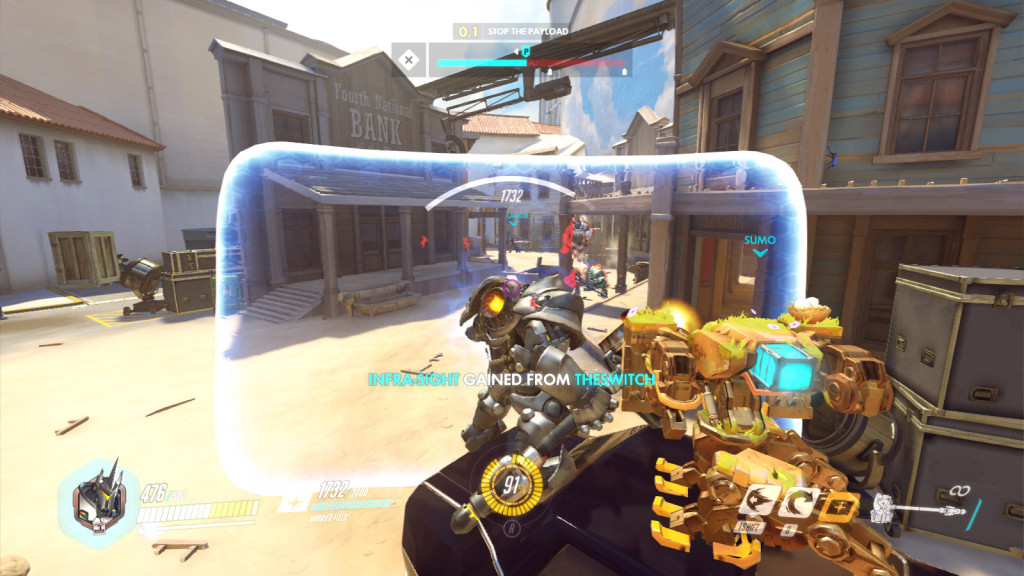 Overwatch consists entirely of competitive 6v6 matches played out over a handful of very similar capture-based game modes. It offers nothing else whatsoever. For a company as large and storied as Blizzard, that seems strangely unambitious, and the closer one looks at the missed opportunities of Overwatch, the more one begins to wonder if the game is missing the mark.

The potential versus the reality:

Overwatch generated a huge buzz when it was first announced at BlizzCon 2014. This was the first new franchise from Blizzard in more than fifteen years, and their first foray into the realm of first person shooters. Its announcement featured a spectacular cinematic trailer that showcased a game world full of color, excitement, and memorable characters.

As details filtered out, we learned that Overwatch depicts a near future world full of fantastic heroes uniting to defend the world from strife and conflict, to uplift the innocent and inspire as well as protect.

Overwatch was shown to feature a cast more diverse than virtually anything else in the gaming world, with a nearly balanced gender ratio and characters hailing from countries on every continent. No one could ever have expected Blizzard of all companies to become a champion of progressive ideals, but suddenly they were setting new standards of inclusiveness.

It was also immediately clear that Overwatch would be backed by lore and history as deep as that of Blizzard’s other franchises. Each of the game’s twenty-one playable characters has a strong backstory that connects to the greater narrative of a world on the brink of being torn apart by the conflicts between human and machine, citizen and corporation.

In short, Overwatch was a game brimming with vigor, optimism, and creativity. 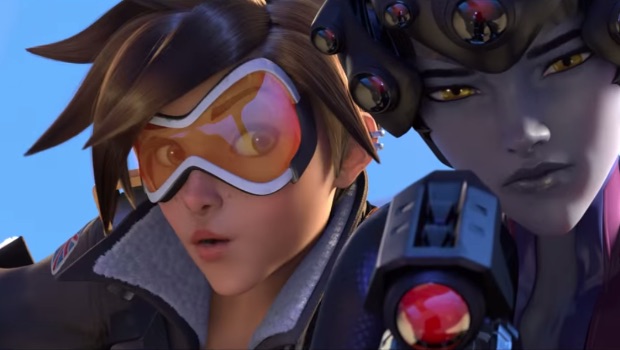 Yet it soon became clear that the reality of the game was very different from the impression given by its bright image and hopeful story. It would consist only of PvP matches completely divorced from the rich lore built for the game. Characters could potentially ally with their mortal enemies to kill their friends — or even themselves.

That in and of itself is not necessarily a problem, but there’s nothing else to the game. Blizzard has repeatedly shot down the idea of offering any other game modes.

It’s also strange that a game that is sold as being so light-hearted and hopeful is in reality quite harsh and unforgiving. Overwatch’s training tools are very sparse, and largely inadequate to the task of preparing those without prior experience in PvP shooters.The game’s mechanic of allowing players to change heroes mid-game also presents an extremely steep learning curve, forcing players to learn a large roster of characters off the bat if they want to play to their full potential.

It’s also a blisteringly fast game, where a split-second’s mistake or hesitation can result in a player’s instant death. There is little forgiveness for the slow or inexperienced.

Overwatch is a game that tries to send the message that all are welcome, yet the game itself has nothing to offer those who are not of a strong competitive mindset.

Overwatch was clearly built to be a PvP game first, and there’s nothing wrong with that, but it could have offered a lot more than competitive play. 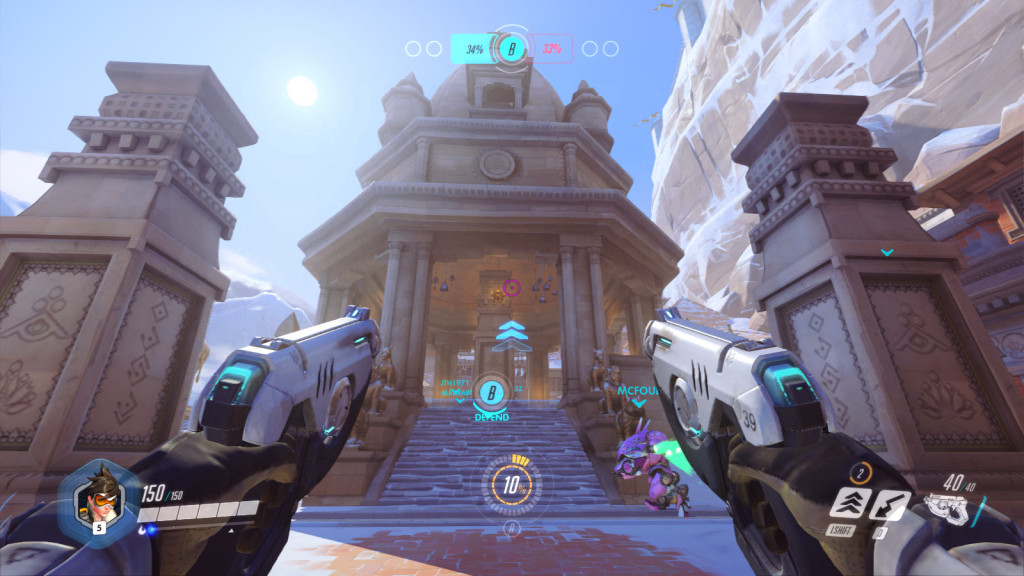 From the moment it was announced, players have been asking about the possibility of a single-player campaign to flesh out the clearly rich lore of the Overwatch universe. Yet Blizzard has shot down the idea every time, preferring to tell Overwatch’s story through outside media like comic books and animated shorts. A strange decision indeed for a video game company.

The potential for a fantastic single-player experience definitely exists within Overwatch. As already mentioned, its backstory is clearly strong, and it’s hero-swap mechanic could make for very unique single-player gameplay, encouraging players to use different characters for different situations, perhaps even multiple times in the same mission. This would also have the advantage of helping people learn the characters before stepping into PvP.

Outside the single-player realm, there is still plenty Overwatch could do to appeal to those outside the hardcore PvP crowd. They could implement a co-op mode that would allow players to work together, rather than against each other.

Technically Overwatch does have co-op in the form of its versus AI matches, but it’s a very shallow feature, being merely a carbon copy of the PvP game with AI opponents. It’s clearly intended purely as a training tool, and it doesn’t even accomplish that very well, as the AI is very predictable and only uses about half of the game’s heroes.

Overwatch would benefit tremendously from a mode designed for co-op from the ground up, such as a horde mode. The game’s lore certainly offers many good scenarios to form the premise of such a mode, such as the robotic rebellion known as the Omnic Crisis.

Even for those who do enjoy PvP, Overwatch seems oddly limited. All of its maps boil down to some variation of “go to a point and stand there to capture it,” and it’s a game that becomes very repetitive very quickly, even considering its impressively diverse roster of heroes. It would benefit greatly from the addition of more game modes, such as team death match or a mode without hero-swapping. 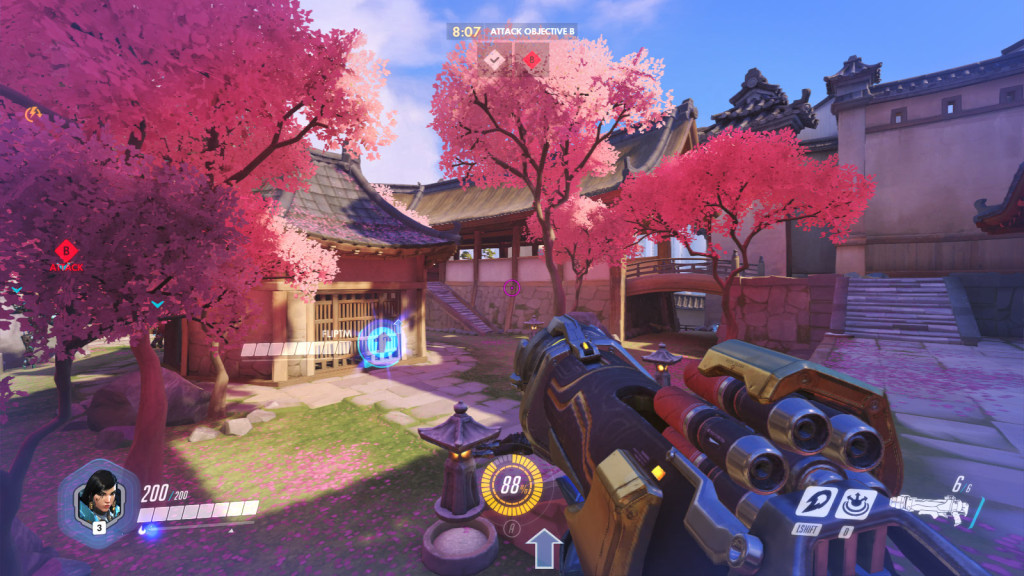 Some variety is brought to the game with its weekly brawl mode, which shakes up the game with wacky new rules like random hero selection or reduced cooldowns, but even that feels like something of a stopgap solution to Overwatch’s repetitive nature.

Comparing to the competition:

When you start comparing Overwatch to other, similar games, its limited nature becomes even more perplexing.

Take the newly released Battleborn. It’s very similar to Overwatch, being a first person shooter with stylized graphics and a wide roster of unique heroes. However, in addition to three distinct competitive modes, Battleborn also boasts a full-length story campaign that can be played either solo or co-op, and players can unlock much the same perks and rewards via solo or co-op play as they would in PvP. It’s not just a neglected training mode; it’s a fully supported style of play.

One could also look to Call of Duty, the franchise sitting atop the shooter world. Call of Duty has a thriving PvP scene, but every new release also includes a full-length single-player campaign and some sort of co-op option.

Overwatch falls short even when compared to Blizzard’s other games. World of Warcraft has strong support for both PvE and PvP. Hearthstone regularly releases single-player adventures to supplement its competitive aspects. StarCraft II is a pillar of the eSports world, but also boasts a spectacular single-player campaign and extensive co-op support. Diablo III appeals to hardcore min/maxers and casual RPG fans alike.

In the context of that, it seems baffling that Overwatch has chosen to have a laser focus on such a specific type of gamer.

StarCraft II offers a robust co-op mode designed from the ground up to support team-based PvE.

Blizzard is the Midas of the gaming world, so it’s hard to imagine that Overwatch will be anything but a success, but one wonders how much more of a success it could have been if it had not focused so exclusively on competitive play.

It’s not a question of if Overwatch will lose players by offering no alternative to PvP, but simply how many. Those players will instead seek out Overwatch’s competition, and while it probably won’t be enough to stop Overwatch from being a hit, it still seems foolhardy for Blizzard to leave all that money on the table.

For what it is, Overwatch is a solid game. The core gameplay is strong, the art is fantastic, and the action is plentiful. But it is an incredibly narrow game. It’s a fantastic experience for those who crave intense, high octane competitive play, but very unwelcoming for everyone else.

One can’t help but wonder why Blizzard has set their sights so low with Overwatch.

Perhaps it has to do with the fact Overwatch is cobbled together from the remnants of Blizzard’s cancelled MMO, the game codenamed Project: Titan. Perhaps the company’s higher-ups were scrambling to recoup what they lost on Titan as quickly as possible, and thus they rushed Overwatch out the door as soon as they could.

If that’s the case, there’s always the chance it could expand to become more feature-complete after launch, but Blizzard has shown no interest in anything like that so far. They seem content with the game’s current, highly limited state.

It’s all very confusing, and for those who were inspired by Overwatch’s colorful and optimistic world when it was announced, very disappointing, as well.

2 thoughts on “Is Overwatch Missing the Mark?”