Landmark is a game with a strange and somewhat sad history. It was originally a spin-off of EverQuest: Next, but when Next’s development was cancelled, Landmark was all that was left. 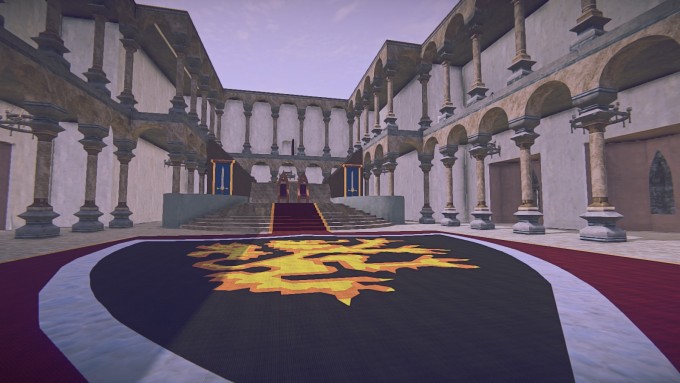 But now it’s finally been officially launched. After all the drama surrounding EQ:N and Landmark’s seemingly endless journey through early access, my expectations for Landmarks were set pretty low, but I maintained a vague curiosity, so I decided to give it a shot.

What I found was not the empty afterthought I expected, but a surprisingly charming and enjoyable little game.

The first thing you’ll notice upon joining Landmark is that the game is gorgeous. Stunningly, breath-takingly gorgeous. It hits a perfect balance between style and realism to create a world that is detailed and vibrantly colorful. So much of my time has been spent just wandering around and gawking at the beauty of it all.

The only stumble for the visuals of the game is its character models, which plunge headlong into the darkest depths of the uncanny valley. Faces are more than a little terrifying.

Character customization is also woefully inadequate — I’m particularly amused by a “facial hair” option for female characters, which does nothing. Though I suppose the point is to show your personality through your build, not your character. Still, surely they could have included a few more options.

On the plus side, character animations are incredibly good. Far more fluid and natural than in most MMOs. Seeing your character adjust their stance to account for a slope or slide down the side of a hill is a real joy. 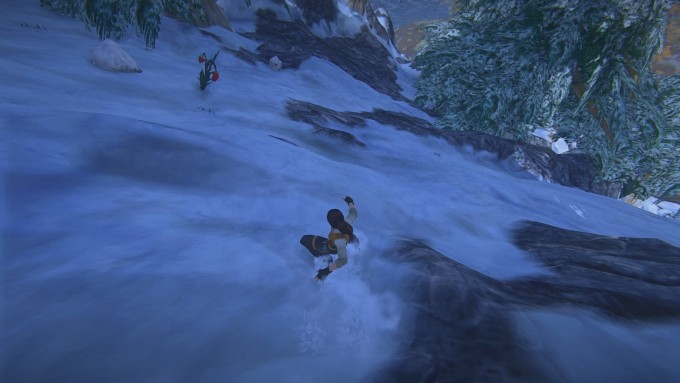 Movement in general in Landmark is fantastic. Every player is issued a grappling hook to allow them to traverse caverns and mountains with ease, and depending on what boots you have equipped, you can unlock various movement powers to help you get around. Few other MMOs make simply getting around such an enjoyable experience.

The core gameplay of Landmark is very basic, but it works. A lot of your time will be spent gathering resources — chopping down trees, mining ore, and so forth. This is quite easy to do, and even the rarer resources aren’t too hard to track down.

It does take a lot of grinding to get enough resources to build anything substantial. In any other game, this would be intolerable, but the beautiful graphics and stellar soundtrack are incredibly soothing, and that makes the grind bearable, if not necessarily enjoyable.

Combat is simple, though more challenging than you might expect. You get just two skills based on whatever weapon you have equipped, and you have a few different choices of armor, but there’s no real vertical progression here.

Landmark’s combat would get old fast if fighting was as crucial here as it is in the average MMO, but it’s a pretty small part of this game. Generally the only place you’ll find significant numbers of enemies is within the chaos caverns, cave systems where the rarest resources are found.

The caverns are an interesting experience. They capture the feeling of exploring the unknown a lot better than your average MMO dungeon crawl, but they’re also pretty repetitive. The only real variety comes from the ruins found at the end of each cavern, which were player-designed. Even then it’s mostly a visual change, as there’s just not that much variety in the combat encounters. 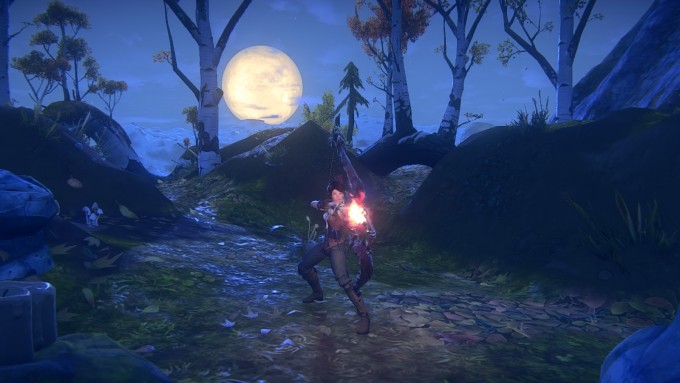 But combat and adventuring aren’t the main attraction in Landmark, so let’s talk about what really matters: building.

The building tools in Landmark can seem a little overwhelming at first. There’s no shortage of options right from the start, and there are dozens more prop recipes to be unlocked over time.

But the game has a very good (if somewhat lengthy) tutorial that does a good job of showing you basics, and once you find your footing, it’s surprisingly easy to build what you want. I haven’t been too ambitious with my creations, but so far I’ve yet to encounter anything I couldn’t figure out how to make.

It also helps that Landmark thus far seems to have an unusually welcoming community for an MMO. General chat is lively and usually seems happy to answer any questions newbies might have.

The relative ease of building and the warmth of the community lead me to believe Landmark would be a very good MMO for children to play, either alone or (ideally) with their parents. I know I would have loved this game when I was a kid.

At the higher end, the potential for what can be created seems pretty impressive. I haven’t spent a lot of time exploring other people’s builds, but so far I’ve found a functioning stargate, a Tim Horton’s, a large and detailed medieval castle, and the starship Enterprise. 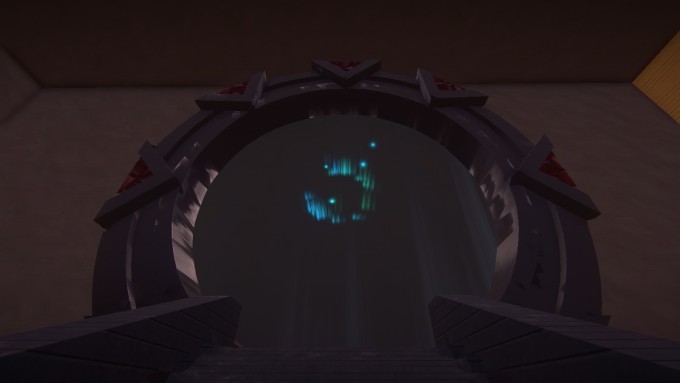 What I haven’t found a lot of yet is builds with combat or stories, both of which are theoretically options. But it’s early in the game’s life, so maybe that will come later.

My one major complaint with building right now would be that you don’t get a whole lot of real estate for it.

Before you can build, you have to stake your claim somewhere in the world. Finding a good spot can take some doing, though it doesn’t seem like all the land has been taken quite yet.

Claims themselves are not that big, though, and by default you can only have one. It costs real money to unlock more. Given how inexpensive Landmark is, that isn’t too unreasonable, but personally I would have preferred to have at least two claims off the bat.

It’s also worth noting you need to maintain your claim. They did a pretty good job of making this as painless as they could; you don’t need to pay anything — simply log in to extend the life of your claim. But you do need to be diligent about it, or you will lose your claim. The design will be recorded, so what you’ve built won’t be lost forever, but finding a new claim to rebuild on could be a hassle.

Landmark has far exceeded my expectations, but it’s definitely got some problems. 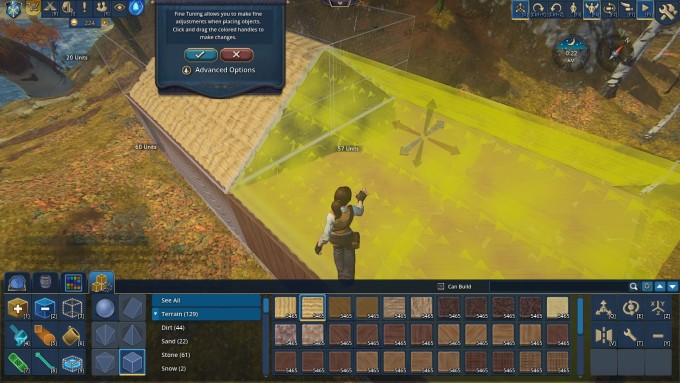 It is lacking in polish, which is pretty baffling considering how long it spent in early access. There are bugs and some stability issues. I haven’t found any of this to be too game-breaking — I’ve found workarounds for all the issues fairly quickly — but it’s sloppy, and it’s just not acceptable in a game that spent so long in beta.

My biggest concern, though, is longevity. I’m not really sure what you’re supposed to do with yourself once you’ve finished building your claim. I suppose you could start building new claims, but that costs cash, and even then, you’ll eventually run out of claim slots.

You can explore what other people have built, but I can’t imagine that holding my — or most other players’ — attention for too long.

There’s also a lot of lingering negativity directed toward the game because of EverQuest: Next’s cancellation, but I would encourage people to let go of that.

The sad truth is that game development doesn’t always work out, especially when trying new things, and Next was trying a lot of new things. In the end it’s probably for the best that Daybreak cancelled the game rather than release something that fails to meet our expectations. I understand the frustration — I’m upset about losing Next, too — but don’t be blinded by it, and don’t think that Daybreak are the villains because of it. 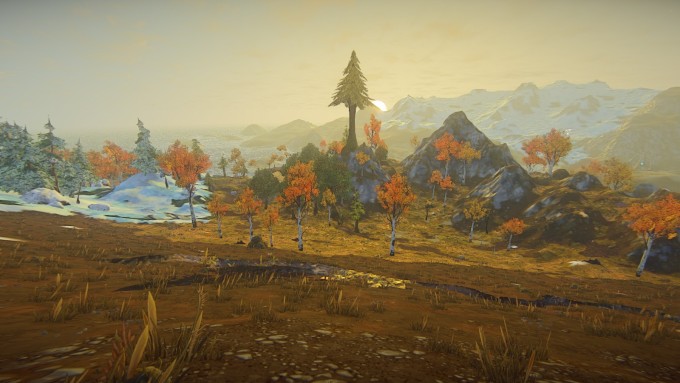 It also needs to be said that Landmark was never the beta for EverQuest: Next, as I’ve seen a lot of people claim. It was always intended to be a separate game. Landmark isn’t an abandoned, unfinished version of Next; it is its own finished game.

Oh, Landmark could — probably should — offer more than it does. I want more character customization options, myself. But it was always intended to be a building tool, not a full-fledged MMORPG.

And as a building tool, it’s pretty good. Not perfect, but good.

Much to my own surprise, I’m going to recommend Landmark. It’s not necessarily worth making your new main game, but it’s got enough going for it to be worth checking out. Even if you only end up running around and exploring for a few days, the game should still justify its paltry ten dollar cost.

For my part, I need to dig out a cellar for my cottage.

9 thoughts on “Landmark Is Surprisingly Good”