If you look closely, a lot of things to do in MMOs are super dull. Nobody in their right mind will claim that sharpening spearheads or doing dailies are the most thrilling activities a game has to offer. Sometimes it feels like I’m working rather than gaming. Why then do we do these things, and heck, why might we even enjoy doing them?

The Demand for Dumb Things

Even though excitement sells games, I would argue that there is a certain demand for doing dumb things in MMOs. Being deeply involved with something exciting is fun, but taxing. This is something I can relate to from personal experience.

Doing challenging content is one of the reasons I’m drawn to the MMO genre. I raid two days a week, so I would not call myself a typical casual gamer.

However, most weekdays I don’t get to login until 9 o’clock in the evening. After a long day at work, I don’t have much energy left. My head hurts when I hear other peoples’ voices and I lack the brain power required to focus on what’s happening around my characters and what skills I need to use. On such evenings, I like to login to the Elder Scrolls Online and do the crafting dailies on all my characters. Dumb, menial solo tasks are the perfect thing to relax. 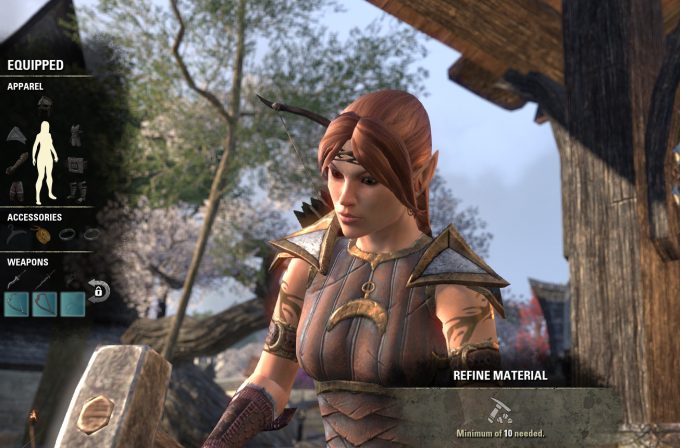 My point is: there is a market for dull MMO content. This doesn’t completely answer the question, though. Because why would I do dumb things in MMO games when I could be binge watching my favorite TV series? This brings us to a second incentive to do mundane tasks: the reward.

The best dumb things to do have a predictable, reliable reward. In management and behavioral science this is referred to as positive, immediate, certain (PIC). Game developers that want to encourage behavior (in this case, have customers play the game), will have the most success when the behavior is met with positive (you get a nice thing), immediate (you get the thing as soon as you’ve done the task) and certain (every time you complete the task, you get the thing) consequences. Sounds familiar? Indeed, I basically just described the pillar stone mechanic of every MMO: the quest.

But this is not all: a positive relationship exists between behavior and the frequency of PIC consequences. Basically, the more regular the reward, the more likely we are to execute the desired behavior. This makes dailies such an effective tool for getting gamers to login and play. Considering PIC strategies are a big thing in management science as well, perhaps we should not be surprised that the lines between gaming and work begin to blur.

Achievements as a Way to Cope

In-game rewards are not the only driving force behind gaming as if it’s work: the reality is more complex. Let’s look at a gamer type that spends particularly much time doing things that resemble work: the achievement hunter.

The main goal of the achievement hunter is to complete everything there is to do. In-game rewards matter less. Sure, the achievements that offer exclusive rewards are a nice bonus, but what matters is to do them all.

MMOs generally come with a helpful list of all achievements that are tracked as the player progresses. The entire content of a game is basically summarized in one big to do list. And this is interesting, because to do lists are also a huge management tool in – you’ve guessed it – business environments. So why do achievement hunters like to do lists so much, even if it’s reminiscent of working? 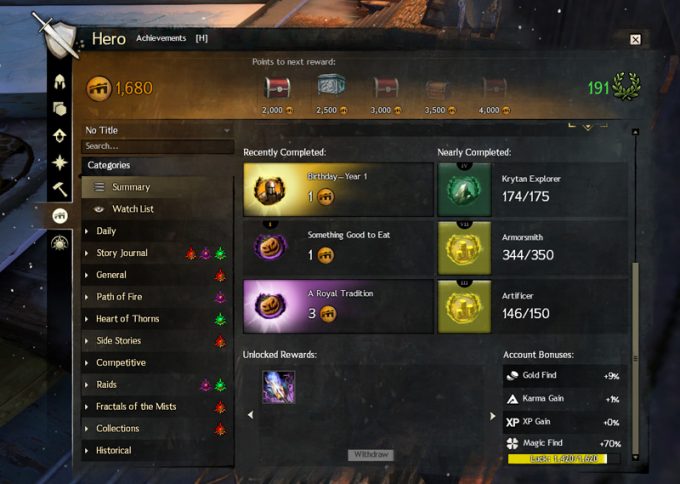 In an interview with the Guardian, psychologist Dr David Cohen mentions three reasons we love to work on lists:

The first stands out to me. Are to do lists a way of coping with the overwhelming amount of content that MMOs these days offer? Game system upon game system, mechanic upon mechanic are piled up as MMOs keep adding things to present their players with something new. New players have so many things to take in that a first reaction might be to panic and log off. I know I have felt that way on more than one occasion. Working towards completing achievements brings structure, offers boundaries and reduces stress. On top of this, lists are a proven way to increase productivity – both on the job and while gaming.

I would argue that the desire to hunt achievements may be fed by games, but the basic drive comes from within. In fact, our brains come up with such creative things to track that in-game achievement trackers never keep up. This is why you see players writing things down in notes that lie on their desks, or keep track of things in spreadsheets on their computer.

Thus far, I have focused on the “soothing effects” of doing achievements in games. Better known, and well-researched, motivations for achieving in games are competition and prestige.

According to Wikipedia, “One of the appeals of online gaming to the Achiever is that he or she has the opportunity to (…) hold elite status to others. (…) They may spend long periods of time engaging in a repetitive action in order to get one more reward.”

Let’s look at players that spend extreme amounts of time grinding boring things. With the risk of sounding derogatory, I will refer to this achiever sub type as the “no-lifer”. The no-lifer is someone who spends so much time gaming that it is inconceivable that the gaming experience itself is still exciting and fun. The goal is not to ridicule this type of player, but rather to understand what drives them. 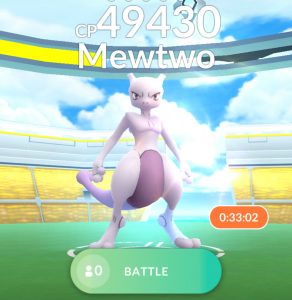 A while back, I saw a video by the well-known YouTuber Trainer Tips that finally made me understand the draw of the “no-lifer” playstyle. “50 Raids in one day with the world’s #1 Pokémon Go player” offers a fascinating insight into the prestige earned through an extremely grindy playstyle. We see a day in the life of BrandonTan91, the Pokémon GO player with the highest amount of experience (XP) in the world. Brandon spends every day in his car, driving from pokémon raid to pokémon raid. He runs complicated calculations to determine the most optimal routes of earning XP. So far, this does not sound very appealing.

But here is the trick: Brandon does not play alone. He has accumulated an entire crew of Pokémon GO players that drive around with him, helping him beat the raids. In interviews, these followers consider it an honor to play with him. It is clear that Brandon is a hero and inspiration to them. Before they met him, they didn’t even spend half as much time playing the game. When asked, all these players recite their accumulated XP count by heart: clearly, this is a social status indicator in their game community.

It is easy to ridicule BrandonTan91’s playstyle as “no-lifer”, but it’s just as easy to see the appeal of spending your days playing your favorite game, together with other players that are just as enthusiastic about that game and treat you with the greatest respect. Even though I may never personally enjoy grinding in Pokémon GO, it is clear to me that these players are genuinely having fun.

For those of you that think Brandon lives in his mother’s basement: if we may believe the YouTube comments, he has found a way to monetize his hobby. For a fee, he catches pokémon for other players. We’ve come full circle: from gaming as if it’s work to gaming that has become work.

We’ve seen that playing as if it’s work is stimulated from within the game: by offering daily or weekly tasks with positive, immediate, certain (PIC) rewards, and by having achievements to fulfill. Moreover, though, it comes from a natural desire within. Keeping track of accomplishments reduces stress and provides with a plan, goal, structure and boundaries. In-game achievement trackers offer a reminder and proof of what is achieved. Finally, prestige is an important drive to live a “no-lifer” lifestyle. The more time is spent gaming, the higher the potential for increased social status within specific gamer communities.

Does working make a game come to life?

Right when I thought I had it all figured out, another thought crossed my mind. What if menial tasks are what makes me feel engaged in the gaming world? When I start losing interest in an MMO, boring, repetitive actions are usually the first victim. I will only login to play dungeons or raid with my friends and stop caring about gear and crafting altogether. When someone asks me whether I still play a game, I almost feel guilty when I reply with “yes”. Even though I technically login and thus play, my heart is not in it. The dumb things I do in MMOs make me feel part of the living, breathing online world – without them, I feel like a pretender.

2 thoughts on “Why We Love Doing Dumb Things in MMOs”