I have some strong feelings about (most) MMORPG health pools. And like any good opinion, it can be summed up with a meme: 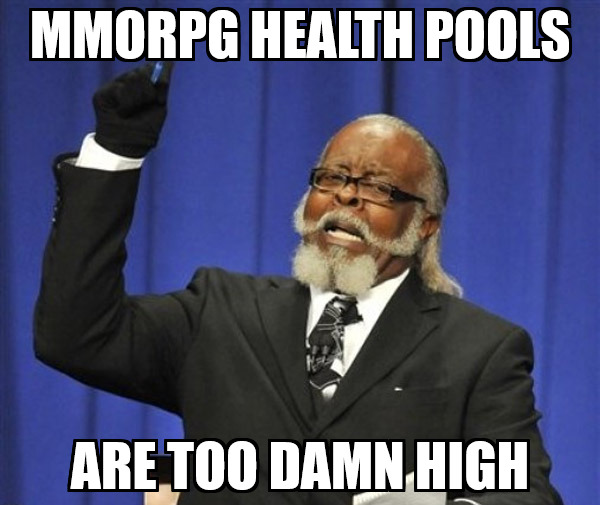 The benefit of large health pools is that it’s easier for developers to balance. Boiling everything down to a few numbers rather than fine tuning systems takes a lot less effort and allows for more fractional balance changes. That’s noteworthy – so I’m not saying smaller health pools is easy to implement.

I’m simply suggesting that there’s a lot to be gained by taking the path less traveled. D&D has balanced around small health pools for decades. Some of the positive side effects of such a system can be found in games like (not surprisingly) Dungeons & Dragons Online.

1) Easier to understand and mentally calculate the effects of abilities, talents, items.

2) More room on the screen for things that aren’t ten digit numbers.

4) Ramps up intensity and sensation of danger (whether artificially or not) when every hit point actually means something.

5) Higher hit points tend to result in longer, repetitive fights. MMORPG battles stay interesting until you “solve” them. On average, I would expect lowered MMORPG hit points to lead to faster battles and fewer slogs.

If It Was Easy, Everyone Would Do it

The main reason high health pools are “in” is because it’s simply less time consuming for developers. This frees up man hours to create more content, which is the current big selling point for maintaining active players. Personally, I’d rather see more time devoted towards a better base system. The content gap can be filled by procedural generation and emergent narrative structures.

Expansions and DLC are usually the primary culprits for numerical inflation. It’s easy to grasp that higher damage, healing, health, etc. is better. Sticking to a low health pool system necessitates developing less obvious character progressions. Horizontal progression is one option (pick the right tools for the fight), but damage mitigation is absolutely paramount regardless of the progression type. Unfortunately, most damage mitigation systems devolve into an obtuse Diablo style resistance system.

Again, tabletop RPGs like D&D offer a neat outline for engineering these solutions. Tabletop games are forced to work with smaller numbers, and there are some pretty cool lesser known RPGs out there like Iron Kingdoms. I know if I had millions of dollars to develop a new MMORPG, I’d spend a few hundred of that on tabletop player handbooks for market research.

At the end of the day, it’s about creating a product that maximizes fun. When choosing between high health pools and low health pools, the latter exhibits so much more potential.