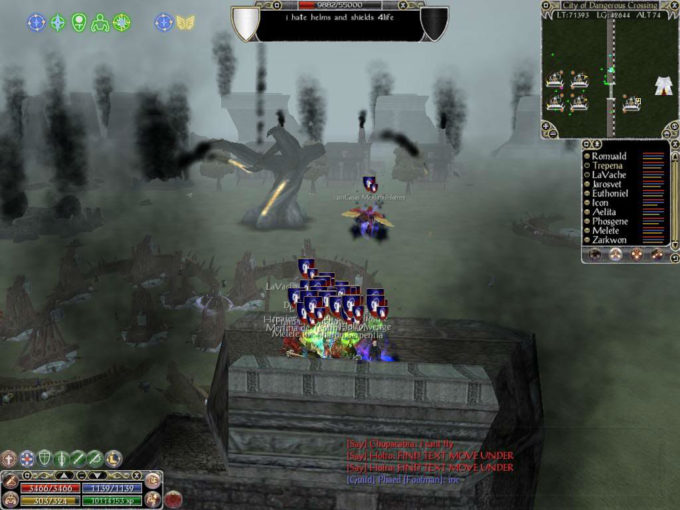 Back in 2003 I thought that Shadowbane was going to do for free for all PvP MMOs what Dark Age of Camelot did for faction PvP. Other than nasty bugs, poorly optimized code, and some serious server issues Shadowbane delivered exactly what I wanted at the time. That may seem like I’m being sarcastic, but I was honestly able to look past the technical issues for such a unique experience. I wasn’t alone with that sentiment either. A not-insignificant number of players with similar interests joined me in heralding Shadowbane’s launch. This was finally an MMORPG where players could shape the world.

The vast majority of cities were in fact owned by guilds, which were in turn run by players. It was they who decided the layouts and buildings of their settlement, not game developers. Sure, there was PvE in the form of generic monsters to kill, but that content only served as a appetizer to the main course. Maxing your characters level wasn’t the goal in Shadowbane, maxing your nation’s territory was. In fact, maxing your characters was actually pretty difficult. Shadowbane used a soft cap system where players’ powers would plateau well before the actual hard cap level. It allows players to continue progressing without developing insurmountable advantages over more casual players.

The combat itself was nothing particularly revolutionary. Standard hotbar combat, really. What was cool was that instead of designing abilities around PVE encounters with taunts, and heals, and damage aggro, the classes in Shadowbane were designed around player warfare. Some classes preferred open battlegrounds, some preferred sieges. To exemplify how specialized roles were in Shadowbane there was a even a class focused around destroying walls. No catapult? No problem. Just send in “Frank the Wall Killer”!

For the most part, playing Shadowbane felt like you were constantly stockpiling arms for an upcoming historic war. And really war was exactly what the playerbase wanted. We were players who read epic fantasy novels, imagined battles with hundreds or thousands of participants, and wanted nothing more and then to take part in it. The thing is, when the wars actually came, everything seemed to fall apart.

This was where Shadowbane’s technical issues really started to ruin the experience. Players would find their town under siege and unable to even log in to defend it. Computers and internet connections would strain to keep up with all of the data being processed from nearby players’ actions. It dampened the entire experience (putting it lightly). In hindsight that shouldn’t have been too surprising. Even with relatively stable code, we’re just now getting to the point where servers can handle the massive load of such large battles. Technical issues weren’t the only thing that spelled doom for Shadowbane though.

In fact it was the very freedom of player rule that would make it so unappetizing. You see, eventually every server got to the point where one nation essentially ruled over all. As was inevitable in a game almost purely about war, the majority of guilds would eventually watch their cities and their allies cities topple to the ground. As much as building a city from scratch with fellow friends motivated players, losing it demoralized with a strength ten times greater.

Those with the will to fight back and reclaim their homeland eventually saw the futility of their ways. Not only would stopping a now even stronger foe be impossible without a major political shift in the rival nation’s members, but there simply wasn’t much else to see when a group “won”. Everything in Shadowbane was built around war, but all wars must come to an end. When the dust settled there wasn’t much of a game left to be had. Having seen basically all there was to do, it was no wonder that players were left without any reason to stick around.

One thought on “MMO Retrospective: Shadowbane”