Maintaining proper perspective on MMO games requires branching out into the unknown from time to time. Transistor, by indie developer Supergiant Games, is my latest foray. It’s a game with few flaws that doesn’t share a lot in common with MMOs but probably should. The story and characters are great. It doesn’t overstay it’s welcome at any point, and the art design melds perfectly with the music to appropriately set the mood. Most importantly though, Transistor treats me how I wish more MMO games treated me. It treats me as an intelligent individual that realizes I know what I want more than the developers. It asks me what I know, rather than telling. This treatment is endearing and typically lacking in MMOs.

In the vast majority of modern MMOs, 5 hours of playtime equates to about 5 levels. This adds or upgrades something like 2-4 abilities, for use in a simplistic rotation. Mastery at this stage is a breeze, and the developers come across as coddling parents. Ultimately, you as the player might spend days of real time until the game trusts you enough to play with the ‘grown up’ toys. Then and only then does the it respect you enough to attack with meaningful challenges.

Compared to indie darling Transistor, I can’t help but feel insulted. 5 hours in Transistor is enough time to net all 16 abilities and possibly even complete the game. Only four abilities can be active at a time so it seems unimpressive at first. Your mind quickly changes once you realize that in addition to an active function, abilities can also upgrade other skills or provide passive benefits. By the end of the game, the player has unlocked enough options to provide over 22 trillion combinations to choose between.

Then there’s Limiters, Transistor’s difficulty modifiers. Players can alter things like incoming damage, number of enemies, health regeneration, and more. In exchange for making the game harder, players receive more EXP to level up faster. Different players will inevitably find different Limiters more suited to their playstyle, and it works beautifully in combination with the freeform skill system. By the time new game plus rolls around, the player is fully equipped to play exactly how the player wants to play, not how the developer wants.

Themepark MMOs especially are all too eager to put the player on rails. They’re afraid of losing players by overwhelming them with options. It’s easier to move people through a funnel than an open field. This spills over into character advancement. New or upgraded abilities come at fairly regular intervals which are, frankly, too slow. Yes, I know what you’ll say. If advancements proceeds too quickly, a Guild Wars 2 situation arises where players jump ship when facing a lack of meaningful progression options. It’s an understandable fear but only if the problem is addressed with the same solutions as before.

Developers make two false assumptions. Firstly, they measure our intelligence poorly and often cater to the lowest common denominator. But most of us are smarter than we’re given credit. Barrens chat equivalents can be cesspool of lunacy, but the average player is there to PLAY and not troll online. The vocal minority does not represent than silent majority. Even trolls can be pretty intelligent – they might just also be assholes. 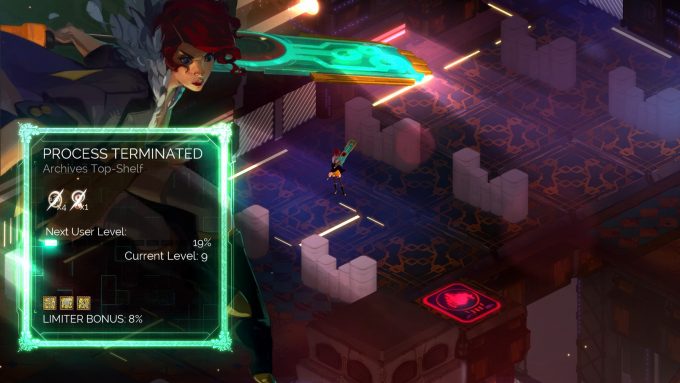 Secondly, developers tend to treat vertical progression all too favorably. There’s a simple reason for it. It better aligns with the linear track on which themepark MMOs carry players. It’s hard to justify more options in one area (the ‘what’ of progression) while limiting another (the ‘how’ of of progression). That’s where the beauty of Transistor shines. The indie game shows us how a vastly underused horizontal progression system can be augmented to add the depth of vertical progression without losing any breadth. Abilities can upgrade abilities in very exciting ways. The large number of skills combinations results in an MMO game that is difficult to fully master but without an overly difficult barrier to entry. And that’s exactly what we should want.

Mastery comes in many forms and many players would prefer not to always be learning something new. That’s where the equivalent of Transistor’s limiters come into play. Let players customize the difficulty of their environment with ease. Instanced worlds will be needed to accommodate but that’s nothing new. At least now we would get a gameplay reason instead of a technical reason for server splits.

From the game’s start, Transistor treated me with respect and without presumption. It had a story to tell with challenges to overcome and just enough direction not to get lost. My options felt limitless, yet I only ever had access to just over a dozen skills. The variance and complexity in which I used these skills were all up to me. For a genre about “being who you want”, MMOs could stand to learn a lot from Transistor’s customizable ability and difficulty models.

2 thoughts on “More MMO Games Should Treat Us Like Transistor”