Fans of StarCraft II’s co-op have gotten used to fairly lengthy waits between new commander releases, but that may be changing now. Just a couple weeks after the release of Highlord Alarak, Blizzard has unleashed another new commander: the elite operative Nova Terra. 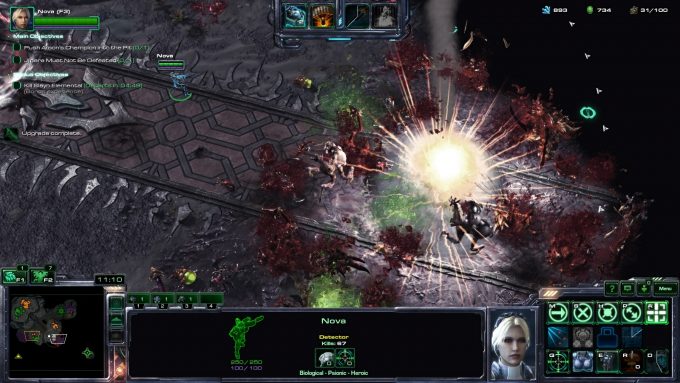 “Explodes” is not a metaphor.

But that’s just the beginning of Nova’s unique mechanics. She is perhaps the most creative commander to date, and she will completely change how you play StarCraft II.

Nova has a very unique gameplay style that focuses much less on economy and more on the action. She has a supply limit of only 100, similar to Zagara, but she never needs to build supply depots. She has access to her full supply right from the start.

The way she trains units is also completely different. Her units are deployed instantly, in groups, at any location of your choosing within vision range. The downside is that there is a lengthy cooldown between unit calldowns. If you’re familiar with the mercenary units in the Wings of Liberty campaign, it’s a very similar system.

Nova’s units are vastly more expensive than normal, but also more powerful, with enhanced health and damage as well as potent new abilities. Most of these abilities can be set to autocast, though, so her army doesn’t require as much micro as you might think. In fact I find Alarak far more taxing from a micro perspective.

As for the units themselves, Nova gets three options per production structure. From the barracks, she has marines, marauders, and ghosts. Because she starts the game with a ghost academy, she can potentially begin training ghosts very quickly.

For mech options, she can produce hellbats, goliaths, and siege tanks from the factory, and the starport grants her access to liberators, ravens, and banshees.

So far I’ve been focusing on mainly infantry builds, occasionally swapping to goliaths when facing air compositions, but all of Nova’s units seem pretty strong, and I think she could have quite a lot of viable builds.

Whatever build you use, I do recommend investing heavily in ravens, as they can deploy powerful healing drones. Nova’s units are so costly that any loss is felt. You want to do everything you can to keep her troops alive.

That brings us to Nova herself. She has very low health for a hero unit — lower even than Alarak — but that doesn’t stop her from being spectacularly powerful.

Uniquely, Nova has two modes — the second unlocked at level three — that she can swap between on a short cooldown. Stealth mode is her default state and grants her pretty much the toolkit you’d expect from a ghost — cloaking, snipe. The one notable new option is sabotage drone, a mobile bomb that detonates for massive AoE damage after a short arming period.

I can’t overstate how amazing sabotage drone is. It has an advanced form of cloaking that makes it completely undetectable and a very long range, meaning you can deploy it with no risk. It’s essentially free damage. It’s easily one of the best abilities in co-op right now.

Nova’s other stance is assault mode. In assault mode, she loses her cloak but gains an AoE blast ability and a short cooldown teleport that also shields her. 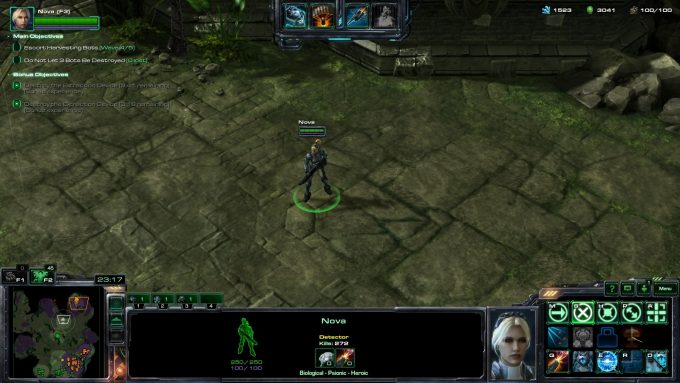 Assault mode seems very niche. It can devastate large swarms of low health units — like zerglings — but it’s risky, micro intensive, and it costs her the ability to attack air. Most of the time you’re going to want to stay in stealth mode, I think. Sabotage drone is too good to give up, and sniping high priority targets is generally more important than mowing down swarms of weak units.

At level nine, she unlocks powerful new abilities for both stances. Stealth mode gains the ability to call down a nuclear strike for ruinous damage across a huge area, while assault mode can summon a holo decoy that will attack enemy units, doing full damage.

Again, stealth mode seems the clear winner here. Both abilities are powerful, but a well-placed nuke can annihilate entire bases, and the fact you can’t directly control the decoy limits its effectiveness considerably.

That said, you’ll still want to use both modes at least a little. The decoy and the nuke have separate cooldowns, so there’s no reason not to use both.

Finally, Nova also has access to a number of abilities accessed from the top bar. She begins with a defensive drone that can shield friendly units and the ability to instantly resurrect herself if she dies, and as she levels, she also unlocks a devastating aerial bombing run and a mass teleport. Uniquely, these abilities have very short cooldowns, but cost minerals.

Every commander has their own distinct feel, but Nova is so different it almost feels like playing a different game. Maybe a better game. 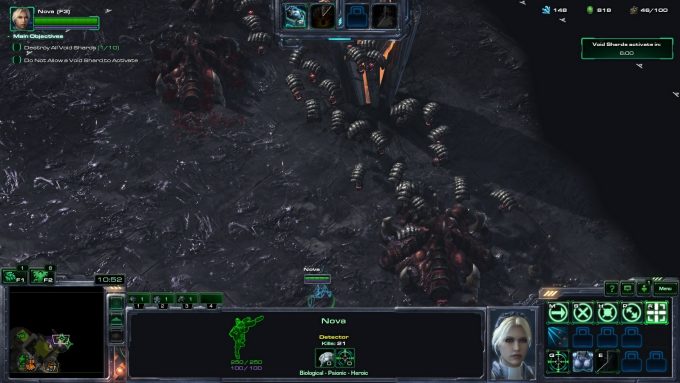 Nova requires almost no economic management. You’ll still need to train workers and build an expansion, but it takes almost no time to get her entire base established, and after that you can ignore everything other than controlling your army.

I love StarCraft II, but one thing that’s always bothered me about the game is how heavily it’s skewed toward economy. If you can macro well, commanding your troops is almost an afterthought. Nova is a very welcome respite from that paradigm.

Nova is theoretically very micro-intensive, but between her much smaller army size and the wealth of auto-cast abilities, she’s actually not hard to play at all. In fact I find her downright relaxing to play. There’s just enough to do to keep you engaged, but not to tax you.

And she’s powerful. Insanely, ludicrously powerful. She’s so good that I think some degree of nerfs are inevitable. While leveling her, I’ve easily outclassed allies who vastly out-leveled me. At times I’ve almost felt bad for my allies. I was able to devastate the enemy so heavily and so easily that there just wasn’t anything left for my partner to do.

Some may disagree, but I think Nova is probably the most powerful commander co-op has yet seen. The last time I felt this powerful in a video game was when I was eight years old and abusing god mode cheats.

The only map I’ve seen Nova struggle with so far is Temple of the Past, mainly because her static defenses leave a lot to be desired. Her siege tanks are very good, but it’s difficult to mass up enough of them due to the lengthy cooldown on summoning them.

It doesn’t majorly harm her effectiveness, but one thing that can also be a little frustrating is how much Nova is skewed towards a slow, methodical playstyle — picking her enemy apart a piece at a time. I very much enjoy that way of playing, but it’s sometimes an awkward fit for a game mode that’s dominated by hard time limits and impatient teammates. With a little work, Nova can tear down an enemy base without risking any units, but often your ally will just Leeroy in before you get the chance.

However, on maps where Nova has the opportunity to play offense and the time to do it on her terms, she excels. Chain of Ascension is probably her best map, but she also does very well on Void Thrashing and Rifts to Korhal. Oblivion Express is another good one for her, purely because her air strike is the perfect size and shape to deal massive damage to the trains while also cleaning out most of their escorts.

If you want to maximize your potential as Nova, my number one tip is to always be using her for harassment. Any time sabotage drone is off cooldown, you’re wasting tremendous amounts of damage. Think of it as your “maintenance” task, like dropping MULEs or injecting larva.

I often split Nova off from my main army, using them to defend against attacks or push a current objective while Nova softens up whatever’s next. If you play your cards right, you can weaken enemy fortifications so much your army can march in virtually unopposed.

I also recommend capitalizing on the versatility inherent in Nova’s army. Don’t constantly lean on the same unit composition. Consider what map you’re on and what the enemy is bringing to bear and plan accordingly.

On the whole, Nova is an incredibly inventive, incredibly fun addition to StarCraft II’s co-op. As a long-time Nova fan, I had very high expectations for her, and she’s exceeded all of them. I can’t recommend her enough.

Nova is currently available to all StarCraft II players for $4.99USD.