“It is a cruel joke that man was born with more intent than life.”
-Malachai

Nearly 5 years after its initial release, Path of Exile is still constantly improving. With massive skill revamps, a slew of new uniques that scream “build around me!” and the new league mechanic; Temporal Incursions, Incursion League promises to keep things fresh for veterans, while mercilessly crushing those unfamiliar with the harsh rules of Wraeclast.

This time around we’ll explore the lore behind the long lost Vaal Empire. Temporal Incursions are a random event that spawn similar to other leagues.

Travel into the past, help explorer Alva Valai locate the lost temple of Atzoatl

Alva Valai is an explorer searching for the long lost temple of Atzoatl. Each time you encounter her in the world she will open a portal into the past at some point during the temple’s construction. Manipulate the history of the temple by killing your choice of Vaal architects and by unlocking rooms to change the temple’s properties in the present day. Manipulate the construction significantly enough one way or the other and you just might find a valuable ancient artifact! 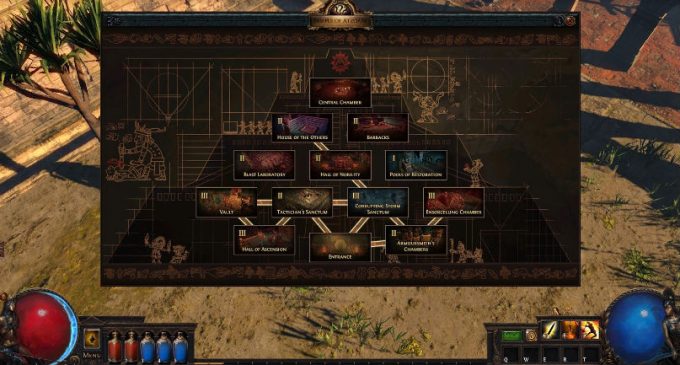 During your Incursions, you may find keys that can be used to unlock doors in the past, allowing access to additional rooms in the future.

Skill gems are also receiving a major overhaul this league. Many old skill gems got pushed to the wayside at newer and flashier gems were released. A lot of effort has gone into revamping these old skills, significantly improving the artwork and buffing/altering their abilities to be more viable. Many classic skills have been updated to have a definitive identity and given some much needed love.

Trickers rejoice! Trappers will be happy to hear that not only have most of the older trap skills also been revamped, but 5 new trap specific skill gems have been added to the game.

Skills such as Rain of Arrows have been tweaked for viability and to fill niche builds.

Finally, what would a league centered around the Vaal Empire be without an update to Vaal skill gems? Vaal skills are receiving a major buff, increasing their viability in virtually all builds. From now on, Vaal skills allow access to both the Vaal and base versions of the skill.

“I fought for God. Who do you fight for, exile?”

What Do I Think?

There some fun ideas for this new season of Path of Exile. Grinding Gear continues to enhance each subsequent league in a manner that’s in line with their audience’s desires. On average, each league delivers more fun than the last.

The problem for long term players is that the leagues don’t provide sustainable improvements to the game’s core mechanics. It’s fun to go back through the leveling process and try out new builds, but it’s fun only so many times before repetition sets in. Perhaps GGG is open to suggestions for how to make leveling more appealing? But even if the developers improved leveling, it’s the super end game that needs the most attention. Diablo style games exist to continually improve our characters via the RNG loot run, and the game capped out on that experience for quite some time ago. There’s simply nothing new at the end of the yellow brick road to entice such a lengthy journey as my first few leagues.

As someone who has leveled through multiple seasons of play, I now find myself rather ambivalent about the upcoming league. The magic of discovery has eroded over the course of (an admittedly very enjoyable) hundreds of hours of play. Now that it’s near faded, I hope it’s not too late to rekindle. I simply don’t think GGG can rest on their laurels and apply shiny new coats of paint to keep things running. Path of Exile needs a renovation and hopefully Incursion will act as a nice stopgap to get us to that next major expansion. I can’t really look at it as anything more than that.

Path of Exile: Incursion will be released on June 1, 2018 for PC, and within a week of that date for Xbox One.