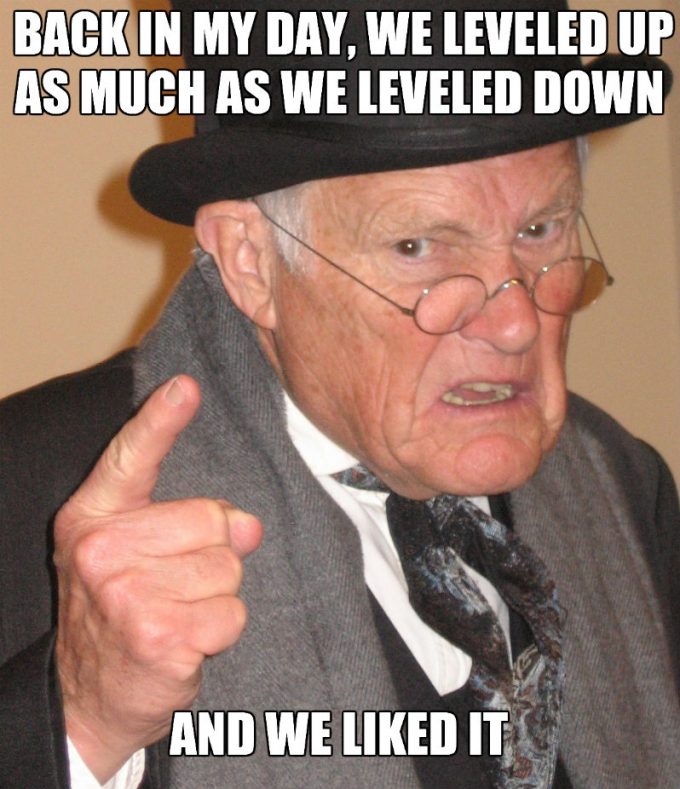 Back in my day, dying was a complete disaster in any MMORPG. Anytime my health ticked down anywhere close to zero, I started to sweat. In Ultima Online, I risked everything on my body and in my backpack. In EverQuest, I risked delevels. In Asheron’s Call, death was a not so happy middle ground between the two.

Nowadays, death is a slap on the wrist. I wait around even less time than in a competitive game like League of Legends to respawn and rejoin the action. This largely encourages lackadaisical playstyles and lowers the common denominator across the board for ease of content. I think in a genre that largely caters to character skill over player skill, death is a key element to adding tension.

The problem is death has only been considered in rather binary terms. You either permanently lose progress (levels or items) or you don’t. Some MMOs use a temporary debuff system to penalize death, but these don’t really change player approaches. However, there’s another option for death that’s been used successfully in other genres.

Instead of negating progress, (thus making a grind even grindier) or lowering stats across the board (thus making a grind even grindier) I propose temporary restrictions of abilities. In this system, recently deceased players will select one of three ability-specific debuffs to “pay” for their revitalization. These debuffs can include increased cooldowns to lowered effectiveness, canceling talents, or even removing an ability’s use. These penalties should be enough to force players into a new playstyle to progress optimally without completely ruining the character. As such, it’s important that developers balance for a wide range of talent/ability combinations, the debuffs last long enough to matter but not so long as to frustrate, and that debuffs cap out at a certain number.

If done right, death is all of the sudden an interesting mechanic. Sure, retooling is tough, especially with multiple debuffs running. But long term it’s entirely possible to stumble upon a new rotation or set of abilities that work even better than in the character’s “former life”. In games like XCOM, the death penalty is quite severe but exemplifies the dynamic level of adjustment that’s possible from changing key setups. Losing one’s best sniper in XCOM (where character death is permanent but squads are six characters large) doesn’t mean the game is over. It does mean you can no longer rely on the same strategies that have worked in the past ten missions.

This is the type of penalty I’d like to see introduced into MMOs (though with less permanence since XCOM ends whereas MMOs do not). It adds tension from its uncertainty as much as it does from jarring the player’s sense of complacency. It’s pretty rare for most players to change builds in MMOs once we find something that works. Death now forces a constant reassessment of setups without permanently altering our ability to play the game we want.