AD2460 is free-to-play browser strategy game developed and published by Fifth Season AS. The game was first released in December 2014 and went free-to-play on December 7, 2015.

AD2460 is an space empire strategy game starting from the point of control over a single planet. From there, the player is tasked with mining resources around the galaxy to expand to other planets. At the start of the game, you are shown the main screen, which shows your homeworld along with various allowed actions. These options include building facilities, researching technologies, designing ships, and manufacturing new ships. Players familiar with Master of Orion should immediately see similarities and fans of the 4x series are definitely the game’s target audience.

AD2460 is a mining-focused game. There are four primary resources you need to gather: Hassium, Indium, Strontium, and Neodymium. These resources are used to build and upgrade ships and structures. Each of the resources can be mined on various planets scattered around the galaxy. You can mine the resources by claiming a planet and building an outpost.

Players can attack and conquer other players’ outposts so building and maintaining a fleet if necessary to grow. AD2460 offers multiple ship types, ranging from large capital ships to small corvettes. Each ship comes with pros and cons. A capital ship is mighty, but alone can be overwhelmed by sheer numbers. Thus, a wise ruler will balance their fleet’s composition.

Combat in this game is turn-based. But unlike most turn-based games, where the ships act one at a time, in AD2460 the entire fleet moves at once. So in a battle, your entire fleet will unload their weapons followed by the enemy fleet’s ships. Battles are automatic, and while you can watch them unfold, you can’t control them. Damaged ships automatically get repaired.

Unlike persistent universe space MMOs, game data here isn’t permanent. AD2460 runs in cycles, and each cycle lasts three months. At the end of the cycle, the server is reset, and everyone starts from scratch all over again.

As you might expect, this game is entirely PvP. After all, the goal of the game is to upgrade your homeworld and build powerful fleets to take over and maintain resource-rich planets. So you end up clashing with other players sooner or later. This game is impossible to play without fighting against other players. 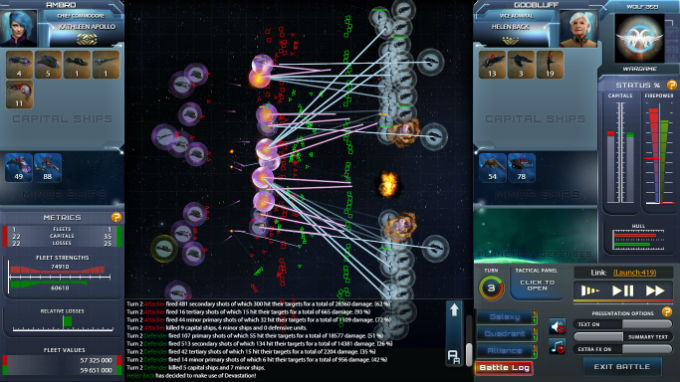 The alliance mechanic is key to enjoying AD2460. Players who want to go the loner route that is encouraged in a lot of mobile empire builders will not like AD2460. An alliance is AD2460’s clan system on steroids. Joining an alliance allows you to participate in this game’s guild wars to vie for control of ancient stations scattered across the galaxy. Alliance members can also borrow allied fleets, access a personal exchange market for members to buy and sell resources, and take advantage of an alliance specific tech tree.

Key to the whole process of a good, free empire builder is that the field isn’t dominated by pay to win whales. AD2460 feels pure. There are no VIPs. No exclusive ships. No items that let you skip the build timer. The only items premium currency purchases are cosmetic changes. Surprisingly, the game doesn’t nag you with ads either. In fact, they hid the way to buy premium currency in some small tooltip.

The developers of this game are also pretty active. The game has a built-in forum where the devs routinely post. There they take the player suggestions and continuously adds new features based on it. The community is also pretty helpful, and people will help you if you ask. There’s obviously a lot of passion for this game by the developers and it oozes out of the game’s star shaped pores.

The biggest downside is that AD2460 isn’t the easiest game to pick up and play. There’s no clear direction for the player and the tutorial isn’t really sufficient. You’ll learn what everything does but not with an idea of what to do with that information. Expect not to perform very well in your first cycle.

I also felt like the menu required more clicks than necessary to navigate. Finding a list of minable planets involves clicking on the star map, zooming out to cluster view, then clicking on the prospect list on the bottom right of the screen. Is it a disaster? Not at all, and it’s not going to make or break the game. It was just bothersome enough to put into the review.

The game’s battle mechanics itself are pretty obtuse too. There are a lot of stats and their effect is not intuitive. Light Frigate units show a “Ter.Firepower: 2 * 2 * 72”. Ter.Firepower is probably Tertiary Firepower, but I don’t know what make of “2 * 2 * 72” itself. Overall, lack of clarify is where I feel AD2460 suffers most and potentially turns off new players.

AD2460 is a great online 4X strategy game with fun alliance mechanics and a monetization system that is perhaps too generous for such an indepth game. The game is bit overcomplicated for what it is, but 4x veterans should be able to pick it up after one inefficient cycle. Would I recommend AD2460? I think it depends on how much interaction you want in your PvP games. The alliance element is critical to AD2460’s enjoyment. If you’re to get invested in an alliance and the game’s diplomacy aspects then it’s towards the top of my recommended browser based empire builders.