Adventure Quest Worlds is a free to play 2D MMORPG developed and published by Atrix Entertainment. It was released on October 10, 2008.

During character creation, you select from one of the four classes: Warrior, Rogue, Mage, and Healer. Your class determines the skills you can learn. Character customization is a bit limited. You can only choose your gender, pick from one of the twelve hairstyles, and change your hair, skin and eye color. Compared to other browser games though, it’s actually ahead of the curve.

Combat in this game is traditional ARPG fare. Double-clicking on the enemy will make your character auto attack it. Afterwards, you either wait till the enemy dies, or you can cast skills to help you in battle. You cast skills by clicking on its icon on the skill hotbar, or by using the hotkeys 0-9. Skills require mana which is replenished while resting.

Killing an enemy earns you EXP and class points, which are used to level up your character and rank up your currently equipped class, respectively. Yes, classes have their own rank, which is separate from your character level. This system might be familiar to people that have played games like Ragnarok Online, which have a separate base level and job level.

But the way classes work in this game is a bit different. Instead of a permanent fixture of your character, classes here are just a piece of item you can equip and unequip at will. And since they are, technically a piece of item, you can buy them from shops, and various bosses even drop some of the classes as rare loots.

Adventure Quest Worlds has multiple in-game factions. By doing quests for that faction, you gain reputation which is used to increase the faction rank for that faction. Increasing the faction rank will give you access to various exclusive faction items you can purchase. For example, increasing your Aegis Faction to rank eight will allow you buy the Celestial Commander armor from their shop. The game has over 40 factions scattered all over the game world.

Adventure Quest Worlds is mostly PvE. The majority of the content is single player. The games’ quests and story are designed to be completed solo, and while you can party with other players, it is not necessary to do so. But the game does have PvP content. There are a few zones dedicated to PvP. When entering these zones, you are assigned a team, either red or blue. Killing an enemy team member will award points for your team. The team that gains 1,000 points first is declared the winner, and all players of that team are automatically given rewards. 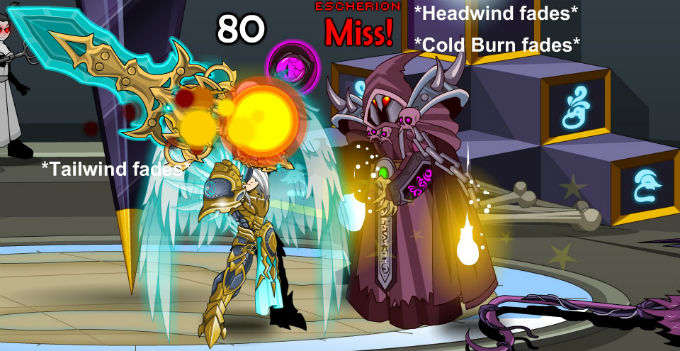 First off, Adventure Quest Worlds is easily accessible for newcomers. The game has an easy to follow tutorial that shows you the game basics. There are also a lot of in-game help articles when you need more details. And since the game is browser-based, you don’t need to download and install the client. All you need to do is to visit the game website.

Another great thing about this game is that it has a lot of classes. Free players have access to around 50 classes and, if you spend money that number balloons to approximately 300. The game has an enormous amount of classes. And the majority of them are quite unique and novel. For example, there’s a class called the MechaJouster where your character rides a cyborg chicken in battle. Crazy creative stuff indeed.

AdventureQuest’s game world is also pretty vast. There are a lot of areas to explore. And most areas have their own unique quests with their own rewards. Adventure Quest Worlds rewards exploration. Unlike most MMOs where most fields consist of nothing but enemies, in this game most areas have some secret associated with it. A lot of the classes are hidden behind various quests and secret areas. It makes you feel that you’re having an adventure.

Finally, it’s a very family friendly game. This can also be viewed as a negative because Adventure Quest Worlds attracts a much younger audience. For those looking to play a game with their child or other younger family members though, Adventure Quest Worlds is worth a serious look given that family MMORPGs represent a very small offering. Wizard 101 is the only other family MMORPG I can really recommend.

Given that’s it a free to play MMO, not all of the content are accessible to free player. Adventure Quest has a lot of paywalls, and in fact, free players are extremely limited in what they can do. A lot of the classes are only available to players that upgraded to legend, which is a monthly subscription. A lot of classes in the game can only be equipped by legend players, even those that are dropped by bosses. Even if you managed to get one of these class, if you’re not paying member you’re not going to be able to equip it.

The majority of the classes in the shops are also only purchasable using Adventure Coins, the game’s premium currency. Some of the features are even locked as a free player. For example, free players get a cottage with limited customization options while paying members have the full-blown housing mechanic. Even that is not permanent. If you let your subscription expire, you’ll lose your house.

Another bad thing about this game is the graphics. It looks like something from Newgrounds. The art is amateurish, and the character animations are a bit awkward. They move like puppets. The art of Adventure Quest Worlds definitely attracts a younger crowd. For those seeking a more mature game, the player base can be a big turn off.

Adventure Quest World is a fun browser-based 2D MMORPG that features a ton of classes and areas to explore. However, players should be aware that a vast majority of the content is locked behind a paywall. It’s a fun browser MMO that never delves into pay to win territory, but paid players definitely get more out of the game. I think if you can stand a younger audience (or are you are young yourself or looking to play with a younger audience because of family) then Adventure Quest Worlds is one of the better browser based MMORPGs on the market.