tl;dr – Free online FPS that combines the fun of Counter-Strike, Left 4 Dead, and Call of Duty with way too much greedy monetization.
PLAY ALLIANCE OF VALIANT ARMS NOW

Alliance of Valiant Arms is a free-to-play FPS MMO developed by Red Duck Inc. and is currently published by EnMasse in the west. The game was first released in 2007. Over that time, it’s changed publishers and implemented a slew of new improvements.

Alliance of Valiant Arms is a team-based FPS MMO, similar to games like Counter-Strike: Global Offensive and Team Fortress 2. As such, the controls are your standard FPS fare: you use the WASD to move your character, and you use the mouse to aim, fire, and look at the map. It was one of the first to jump on the FPS/MMO train.

On first install and run, you’ll create a player character and customize it. Unfortunately, character customization is limited at the start, as you can only change your characters’ face. You can, however, purchase various cosmetic options and costumes for your character using the game’s currency later on.

Since this game is an FPS, there is no overworld map; there is no hub world. Instead, the game uses the lobby system. You have to select a game server, then a channel, and then either choose an open room from that channel to join or create a new room to play. The game has four main channels, but most of the players are on the PvP channel. This isn’t surprising since A.V.A. is primarily a PvP oriented game. All the game modes require multiple players to play (though sometimes bots can substitute for players). Bots may make it easier to fill games, but their programming seems to revolve around running around the map randomly while spraying bullets everywhere.

That’s not to say there is no PvE content. Quite the contrary! In addition to allowing you to add computer controlled bots in most game modes, A.V.A. also has a cooperative mode, where teams of five players mow down waves upon waves of computer controlled mobs. This mode is remarkably similar to Left 4 Dead. The enemies are even mutated zombies.

The game has a ranking and achievement system. Unlike competitive FPS games like Counter-Strike, in A.V.A. getting to a higher rank and completing various achievements gives you an actual in-game advantage/reward. Not only do you get new weapons or money, but you can also get them to unlock different passive skills. This brings A.V.A. in line with FPS games like Call of Duty and Battlefield, as they implement more persistent MMOFPS features.

Back to reviewing the skill system in Alliance of Valiant Arms. Every skill in this game is passive, and they require either being a certain rank or accomplishing a certain achievement. Each skill provides a unique and distinct advantage. For example, you can get a skill that decreases your reloading time, or one that reduces your fall damage. 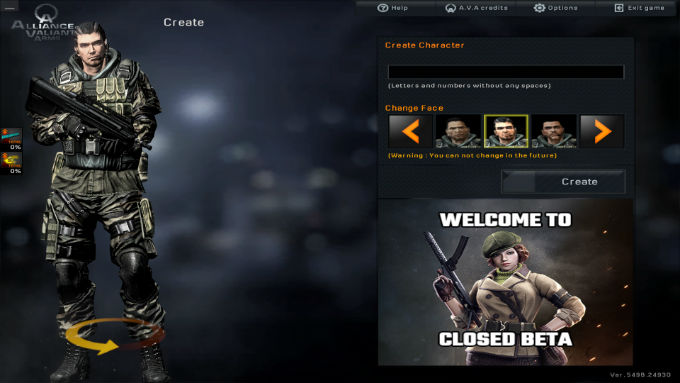 Alliance of Valiant Arms has a large amount weapons. You have over 300 weapons to choose from, each with their own different stats and attributes. Pretty much all the modern guns are in this game. Not only that, but you can also customize each weapon by changing its barrel, mount, trigger, grips, stock, and paint. And these customizations are not merely cosmetic; they also modify the weapons’ stats.

The game also has an extensive variety of game modes available. Not only do you have the standard counterstrike-like game modes, but A.V.A. also offers options such as a cooperative zombie survival mode, free for all deathmatch, and capture the flag, among others. The developers pretty much took all the popular game modes from other FPSs and put it all on this game. There’s even a cooperative story mode where you work with other players to complete a mission.

Unfortunately, the game has pay-to-win weapons, over 100 of them to be exact. And yes, they are actual P2W guns with overpowered stats. As a result, skill takes a backseat in Alliance of Valiant Arms compared to more mainstream online FPS games.

Actually acquiring new weapons and skills through free means is also tedious and grindy. Most weapons are rental and expire after a few days. Permanent weapons exist but cost a lot and require money to get repaired. It’s not worth it, to be honest. The interface is also lacking. A good example is the main lobby, which looks like a sketchy website with a lot of ads. The buttons are also positioned in the last place you would look for them usually.

Finally, the community is pretty horrible. The game has a small dedicated userbase quickly rejects newcomers. Expect to get insulted and griefed while playing this game. That may not be too different than other competitive online games, but it felt worse than normal when I was reviewing Alliance of Valiant Arms.

Let me end this review by saying that Alliance of Valiant Arms is a decent FPS game. It has a large variety of weapons along with a ton of game modes. Unfortunately, the game’s P2W aspect ruins the competitiveness of this game. Online FPSs are supposed to be a game of skill, and no one wants to play a game just to get demolished by someone that spent a lot of money in-game. If the cash shop and free play acquisition rates were redesigned this could be a really great game. And there is some hope of that as the new publisher, En Masse, seems to be listening to the players. They also have a good track record with TERA.