Atlantica Online is a fantasy/mythology/historical MMORPG developed by NDOORS and published by Valofe. It was first released in the west on October 30, 2008, and is currently available in most parts of the world as a free to play MMO.

OK – so first we make a character. There are three playable ‘races’ in this game. It’s in quotes because they’re not really races. The three races are the “Descendants of Atlantis,” Atlantians, and Atlantian Hero. Each race is locked to specific classes, and there are minimal customization options available. Nothing really special here but this game is more about assembling a team anyway.

The classes in this game mostly revolve around your character’s primary weapon. For example, the “Descendant of Atlantis” can choose between Axe Main, Power Saw Main, Spear Main, Sword Main, Bow Main, Cannon Main, Gun Main, Instrument Main and Staff Main. And yes, those are the actual names of the classes in this game. Generic English translations are now out of the way. Onto the fun aprt.

What sets Atlantica Online apart from other MMOs we review is the hiring of mercanies to fight with you during battle. You can hire up to 52 mercenaries as long as you have enough place to keep them, for example, by building mercenary rooms on your house. Imagine a castle like in Suikoden with a bit less flair. You are however limited to eight mercenaries with you during battle. That still makes for a lot of options. There are over 30 mercenaries in this game, and each has their own unique skill set and appearance. Mercenaries are pretty much NPC players. They level up, they can use pieces of equipment, and they have their own separate inventories.

Now we come back to Atlantica Online’s unique battle system. Unlike most other MMOs, this game’s battle system is turn-based. Where Atlantica Online really shines is as a strategy MMO that isn’t the of the typical browser based city builder variety.The battle system is similar to most JRPGs where you and the enemies take turns attacking each other. Every turn during combat, each of your character can select from one of the six actions you can do: Attack, Search, Defend, Move, Standby and Magic. Each action consumes a different amount of AP (Action Points). For example, Attack consumes 100 AP while Standby consumes 0 AP. As you can expect from a game with turn-based battles, Atlantica Online is mostly PvE. You spend most of the time in this game raising you and your mercenaries.

That said, there is PvP in this game in the form of an arena competition, and it’s a worthwhile endeavor. Every three hours there’s a free league/championship competition in-game you can join where you fight with other players. You are automatically match with players on the same skill rank and there’s a ten minute limit per battle. When on even footing, Atlantica Online boasts one of the best battle systems amongst MMORPGs. 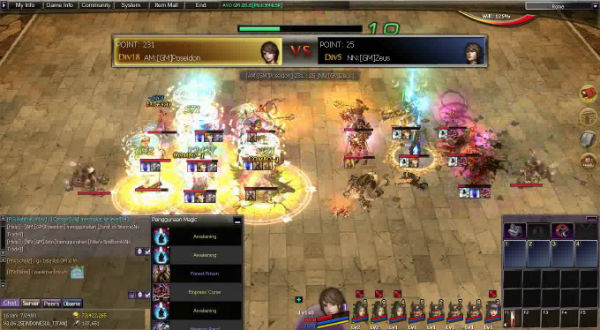 Atlantica Online has a pleasant mythical setting. It’s set on Earth, but with all the famous legends mixed in it. It’s part history, part mythology, and it combines for an overall familiar but original universe. You have the Atlantis Continent in-game, along with the Holy Roman Empire in Europe, while America is in a dieselpunk setting and the Middle East has Ancient Egypt and Babylon. I really loved exploring Atlantica Online and did so well past when I was ready to finish this review.

The game also has a really extensive crafting system. There’s practically no vendor NPCs in this game. Everything has to be crafted and sold by players. As a result, the game’s economy is entirely player driven, and there are over 40 crafting skills in this game. But you don’t need to grind crafting skills painstakingly. Other players and NPCs can teach you their crafting skills. As someone who appreciates a vibrant economy, this is a huge plus.

Atlantica Online’s turn-based combat is good. It doesn’t bog you down with unnecessary details, but it isn’t simplistic either. The turn-based battle has actual depth to it; you have to actually plan your actions rather than spam your strongest attacks over and over. There’s also an auto-battle option so fighting random mobs doesn’t get tedious. Imagine a JRPG where you can grind pretty easily while doing something else but be there front and center for the challenging boss fights. That’s what you get with Atlantica Online.

The game also has plenty of classes. There are 13 player classes along with 30 mercenary classes available, and each has their own unique skills and weapon style. Every class plays differently from each other, and they have their own strength and weaknesses. As a result, experimenting with your party builds, figuring out what works and what not is a fun part of this game.

I’ve been pretty optimistic so far, but every game has its flaws. Player character and mercenaries all look the same. The game has limited character customization options. You can only choose from about three hair colors and six hair styles. Some of the races are even gender locked. Pretty much the only way to differentiate yourself from the rest is via your equipment.

The monsters too are recycled. A lot of the monsters in-game are just palette-swapped versions of each other. For example, you have the Crazy Fox, a level 15 weak starter mob. It looks like a meek fox with a horn on its head. Now Crazy Fox’s appearance is fitting; the model looks exactly what a weak monster should look like. But then you have the Crimson Fox, a level 110 elite mob that use the exact same model with a different tint. It doesn’t make sense that a high-level monster is using weak looking fox model. Pretty much every high leveled mob is like that. They just recycled some low-level mob’s model, increased the level, added some skills, and called it a day.

The game also suffers from a small player base. This is especially a problem for this game since it’s a player driven economy. A lot of the items, especially mid-game gear is scarce and hard to find. You’re going to have to farm mats and craft most of the items you need yourself. As you can expect, it’s a tedious affair, especially since this game has turn-based combat. It’s pretty key then to find a guild or a group of friends to play alongside.

In closing, Atlantica Online is a very good MMORPG with the fun mythical setting, good turn-based combat, comprehensive crafting system along, and a large variety of classes. Unfortunately, it also suffers from limited character customization, recycled graphical assets, and a small player base.

And that’s it for my Atlantica Online review. In the end, is the game still worth playing? I think so. There’s a lot of good things going for this game like the turn based combat and the large variety of classes. The only concern is putting time into something that might die in a few years due to lack fo players.