Atlas Reactor is a simultaneous turn-based tactics MMO developed and published by Trion Worlds. It was released on October 4, 2016. It is a free to play game with a onetime purchase option to unlock all content.

Reviewing Atlas Reactor is tough as the gameplay is really unique for an MMO. It features many mechanics very familiar to MOBA gameplay found in games like League of Legends. Then it adds a dose of very unique gameplay elements to create something wholly unique in the market. The best comparison is if one took League of Legends, X-COM, and Frozen Synapse they’d get Atlas Reactor. It’s a 4v4 turn-based tactics multiplayer with simultaneous 20-second turns.

First, let’s talk about the MOBA mechanics. In Atlas Reactor, two teams of players, called freelancers, fight against each other for control of the map. The game can be played in either 1v1, 2v2, or 4v4 mode. Unlike most MOBAs, however, there are no lanes, nor are there creeps. Instead, the goal is to rack up a certain amount of kills, usually five, against the enemy team. Atlas Reactor is all team deathmatch, and there’s a ton of strategic flexibility.

There are around 15 freelancers to choose from, divided into three categories: Firepower which focuses on ranged DPS, Frontline which focuses on melee and tanking, and Support which focuses on buffs, healing, and shielding. Like most MOBAs, each freelancer has their own unique sets of skills and abilities. As a free player, you won’t have access to most of the freelancers. Free players choose between a weekly rotating set of six freelancers.

Each freelancer has five skills/abilities each, and you can further customize these abilities with mods. Mods give additional effects to your skills, and these effects are unique for each skill. Mods require mod tokens, which can be purchased using ISO, Atlas Reactors’ in-game currency. No mods are inherently more powerful than one another, but it adds more build flexibility to the freelancers.

Like I said above, the game is turn-based tactics, but one that is a bit more complicated, thanks to the simultaneous turns. Each turn is divided into two parts: the planning phase, where you input your command, and the execution phase, where all the player actions are resolved simultaneously. Each skill/action belongs to one of the four action types, and these action types execute in a certain order.

The order is Prep>Dash>Blast>Move. In general, Prep abilities are buffs, Dash abilities are movement skills, Blast abilities are attacks, and Move is normal map movement. You have 20 seconds each turn to input your commands.

Since Dash commands execute before Blast commands, you cannot just blindly target the space where the enemy player currently is, since they can dash and make you hit an empty space. You have to anticipate where the player will move to and target that area instead. As a result, Atlas Reactor is a game requiring a lot of forethought and reading how the enemy will move. There’s a big psychological element, but skilled players will watch what actions are available to their foes. All skills have a cooldown timer and players also select three catalysts, each with a onetime use. Understanding the options a player has at their disposable will significantly increase your odds of making a good play.

The game is focused on small group PvP. Bots are in the game, but the real meat is going up against other players. Those who want to relax though can opt for unranked play instead of the more competitive ranked play (which is only available for paid players anyway). 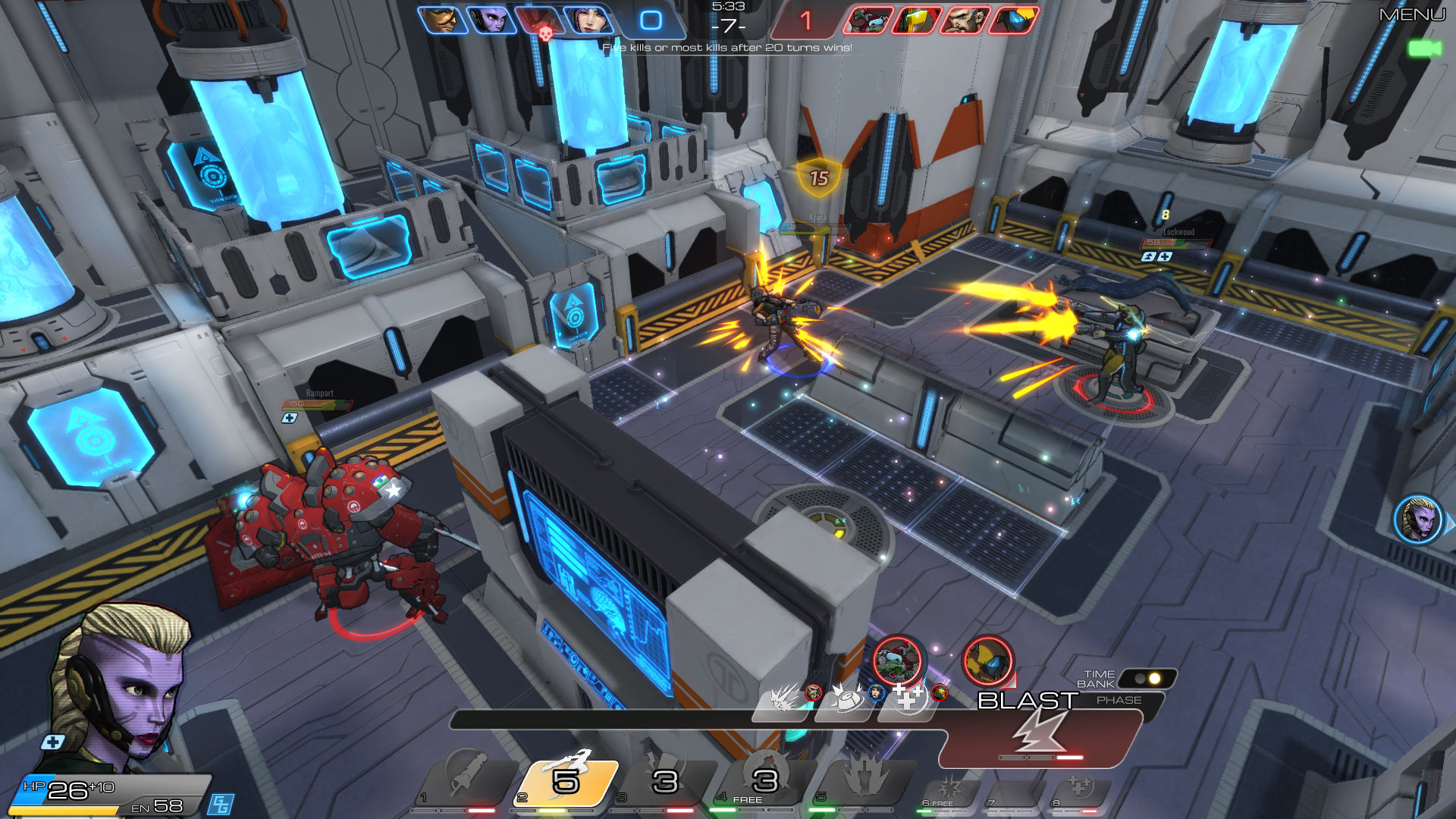 Atlas Reactor has a fun comic book upbeat art-style. Every freelancer is beautifully modeled and oozing character. And their animations are all fluid and grand. They talk to each other during matches and have extra animations that can be unlocked through play. As a result, the freelancers in this game are all memorable and impressive.

The game’s strategic gameplay is fantastic. This is a surprisingly deep game with a lot to think about. Unlike say X-COM, you just can’t just point at an enemy and attack; you have to read your enemy and act accordingly. And the enemy will be doing the same; they will be trying to anticipate and read your actions. There’s also no random roll of the die to determine whether you hit. No more will you cry out in anger after missing a 95% shot. Damage is completely deterministic in Atlas Reactor so winning and losing is all up to the players involved. It’s an extremely rewarding strategy MMO.

That said, there’s not a lot of downtime. Atlas Reactor revolves around thinking and planning one move ahead of the enemy. With only a 20 second time limit to input a move, it can be frustrating for some. However, it’s certainly a lot easier to deal with than a real-time MOBA, and most players seem to adapt well enough after a while.

I’ll bring extra attention to the monetization model. When reviewing a Trion Worlds game like Atlas Reactor, it just has to come up. Trion gets a lot of pay to win hate, some of which is unfounded, some of which totally is. I’m happy to say that Atlas Reactor is one of the most fair free to play MMOS on the market. Free players can accumulate ISO, the in game currency, to buy things like skins. They just can’t actually spend it or acquire permanent use of characters until they spend money. A single purchase of .00 will unlock all freelancers, ranked play, and remaining content forever. It’s very much an Overwatch model, but I found the rate of acquiring goodies is even better. Trion is also putting out new freelancers at a MUCH faster rate than Overwatch and possibly doing a better job of balancing them.

Atlas Reactor has a limited amount of maps available. And all of them feel the same. The maps all share the same symmetrical square layout and are pretty small. I get it; this game is competitive, so the game maps must be balanced. There are subtle nuances as players advance in skill, but gameplay can get kind of repetitive after a while due to the maps.

The game also suffers from a significant learning curve. The order of execution mechanic in the game is quite complicated, and you need to understand it to play this game entirely. If you don’t, you won’t be able to plan your moves correctly. Even after getting down the whole Prep>Dash>Blast>Move order, there are a ton of status effects to learn. Atlas Reactor may be innovative, but it’s hardly intuitive.

Even though I called attention to the free model as a positive, I’m also going to call it out as a negative. Atlas Reactor isn’t pay to win, but there’s simply no way to fully enjoy this game for free. You can’t unlock new freelancers as a free player so you are eternally stuck with the weekly rotating free roster. The free mode is just one glorified unlimited trial or demo. As long as you know that going in, you can take your time to see if Atlas Reactor is a long term game for you.

Atlas Reactor is a fun, refreshing game featuring a stylish art style combined with an innovative hybrid MOBA/turn based tactics gameplay. But the game also suffers from a lack of maps and difficult to pickup gameplay.

Overall, I’d review Atlas Reactor with a hardy recommendation. The game is extremely unique and offers something for both real time and turn based strategists. You really owe it to yourself to try Atlas Reactor, especially if you’re a fan of turn based tactics like X-COM or MOBAs like League of Legends.