Black Desert Online is a fantasy MMORPG developed by Pearl Abyss and published in America and Europe by Daum. It has been available in those areas since February 2016. This review for Black Desert Online will focus solely on the NA/EU version. The Korean, Russian, and Japanese versions all have significant differences.

Black Desert Online exudes personalities of familiar games such as Stardew Valley, Diablo, Eve Online, ArcheAge, and Pro Bass Fishing. The game combines a sandbox world full of life skills with action combo MMO combat and an ‘endgame’ focused on PvP. There is a lot to learn in Black Desert because it does not follow the conventional MMORPG quest hub based progressions. Progression is much more non-linear and involves more than just leveling up a character.

When first entering the game, the player will proceed with a few tutorials to get up to speed on combat. Depending on what quests the player undertakes, they may find some tutorials for other life skills such as farming and gathering. Other systems like the amity conversation game is something the player is painfully left to figure out on their own. And it’s a common theme for Black Desert Online not to explain everything in depth. At times it is extremely frustrating, but it also leads to a greater sense of community as players band together to learn the game.

Combat reminds me of Diablo in that enemies are relatively weak and fast to kill. The player will typically be fighting a good dozen mobs at any given time when leveling. The player gains access to roughly twenty skills/spells and uses them through key combinations such as pressing down arrow and ‘s’ to shoot a fireball. Some will only trigger after using certain skills, creating combos for the player to consider. It’s all very frantic and exciting, especially in PvP.

There’s also a bit of treasure hunting at higher levels. However, there are a very small number of actual item choices. The treasure hunting comes into play because items must be combined with a prayer to RNGesus in order to acquire the best gear. Players will also get seriously excited when something super rare drops.

Black Desert Online employs a leveling softcap with no true hardcap. Level 50 is the softcap and reaching that point is fairly quick. Players who know what they’re doing reach that point in under 10 hours. After that, leveling speed progressively slows down. The joy of leveling itself is a mixed bag. Life skills will level you up so it’s possible to reach level 50 without any combat. Typically though, players must kill tons of mobs to level up. The enemies are extremely bland until after level 50 (and even then only employ a few changes) and quests give rewards other than EXP. So the most effective way to level is mindlessly grind. However, it’s no more boring than killing tons of minions in Diablo and because leveling is fast, the scenery does change quickly. 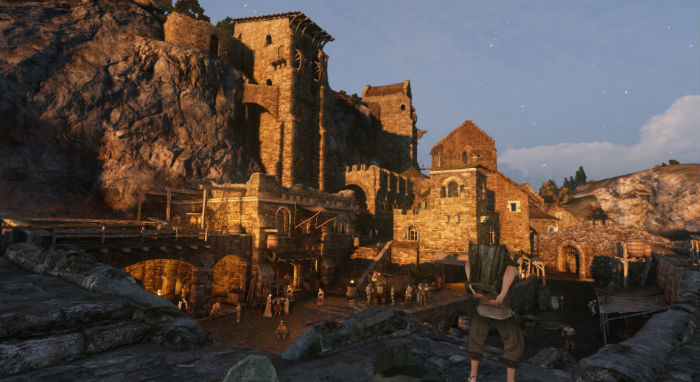 The sandbox life skills are a huge part of the game. Black Desert Online is reminiscent of Stardew Valley with the non-combat activities and NPC amity/reputation system. Players can choose to go into trading (buy low/sell high), farming (crops not mobs), horse taming/breeding, industry (hire workers to gather materials), fishing, cooking, alchemy, and hunting. Some of these such as fishing can be done AFK so players without as much time can still progress. They are definitely all a big part of the game world’s economy and contribute to a rich crafting MMO.

Player made goods don’t have the same impact though as say Eve Online. The player auction house pricing is controlled so goods can only be sold within a certain range that slowly changes over time. Player trading is also limited to food and consumables. Both of these limitations are to prevent gold spammers which, to be fair I see a lot less of in Black Desert Online.

Players will also need to contend with contribution points and energy. They can be respectively earned through questing and gaining knowledge. Contribution points allow players to buy nodes which increases drop rates, gives bonuses to trading, and allows workers to gather the node’s resources. Energy is used to craft goods and level up nodes for more bonuses. Max energy increases as monsters are killed, locations discovered, related quests completed, and other knowledge activities.

Guilds and PvP are also a huge facet for Black Desert. Guilds level up through missions which give players access to skills. Missions are undertaken by players either to kill monsters, trade goods, or gather resources. Leveling up the guild will grant bonuses for the players and with enough money, allow the guild to rent a guild a house. For PvE guilds, that’s enough.

For PvP guilds, they can declare war on other guilds to kill them without penalty. Eventually these guilds can also siege castles to take over territory in the game. The game also adds open PvP after level 45. Players who kill innocents though will incur a karma penalty. Karma penalties add up with each kill, eventually doubling the death penalty and allowing everyone to kill that player without karma penalty. The main reason OPvP comes into play is to force people off grind spots.

Black Desert Online visually shows its Korean influence, but is far from a generic Asian MMORPG. There are three big selling points and all of it boils down to immersion. Near infinite progression always gives players something to strive towards. The sandbox life skills not only provide a nice break from combat but offers fun game mechanics to learn. Each sandbox skill has server rankings for those who want to compete on more than just level.

The PvP element brings guild competition to its peak. The battles in Black Desert Online are truly epic and will leave PvP lovers more than satisfied. Finally, the game has a lot less gold spam and bots than other MMORPG releases.

Things like near infinite progression also means casual players can’t ever truly catch up. Although the action combat does have a heavy skill component, there is only so much one can do to overcome a gear gap. Leveling isn’t a huge deal, but gear does and for all intents and purposes it is the same to a casual player. PvP does not help players level up either which is a negative for pure PvPers. In order to maximize PvP effectiveness one will need to kill bosses and grind mobs. Although they’re effective, the anti-botting measures overall do the hurt the economy. A truly open economy with buy/sell orders such as Eve Online and a lower tax rate (35% seriously??) would improve the game for economist types.

Lastly, one thing I haven’t mentioned is the cash shop. It’s not quite pay to win, but it does offer noticeable advantages. There are no direct uncounterable combat bonuses, but players can slightly increase EXP rate or add inventory/weight slots to help with farming. Anti-P2W purists may not like it, but the US/EU version of Black Desert Online is not P2W like ArcheAge or other Korean MMORPGs. Most people will be fine with the cash shop but it’s also worth noting the price of cosmetics. For example, costumes cost 30$ and one use random dyes are 0.50$ each.

If you’ve always wanted a fantasy version of Eve Online with fun action oriented MMORPG combat, Black Desert Online is a dream come true. Players who hate the idea of grinding may either enter their worst nightmare or find that all the other sandbox activities offset the repetitive monster killing. I’ll close this Black Desert Online review saying that it is definitely different from the current crop of MMORPGs. That alone might make it worth picking up for the buy to play price tag.