Brawl of Ages is a free-to-play strategy MMO developed by BNA Studios and published by S2 Games. It was first released on April 11, 2017, and is currently available on Steam.

Brawl of Ages is a game that combines gameplay from MOBAs and tower defense along with some CCG mechanics. The game is played from a top-down overhead perspective on a symmetrical map with two lanes. You have a base in middle-left side protected by a single tower on each lane. The goal of the game is to destroy the opposing player’s base.

Okay, that sounds like stereotypical MOBA. But unlike MOBAs you do not have a hero unit you control. Instead, you have a card deck from which you can deploy units or cast spells. Using a card costs mana, and mana replenishes slowly throughout the game. But it’s not exactly a CCG game either. While you have a deck, you’re limited to 10 cards, and all of them are already in your hand at the start of the game. You can also play the cards as many times as you want, as long as you have enough mana.

The game is entirely controlled via the mouse. To play a card, you select it from your hand on the bottom of the screen, and then you click on an area you control. That’s the extent of the control you can do in this game. You do not directly control any of the units you summon. They automatically attack the nearest enemy units on screen.

Brawl of Ages is fast paced. Each game has a time limit of three minutes. To win the game, you either have to destroy the enemy base or be the side that has the most structures left standing at the end. Winning the game rewards you with seals. A complete victory by destroying the enemy base nets you three seals while a win due to time out nets you two seals. These seals are used to spin for new cards. You get one free spin for every ten seals. Of course, you could also pay money for a spin.

As you can expect, this game is PvP focused. There is a practice mode that allows you to play with bots, but it’s just practice, and you don’t get any seals from it. Brawl of Ages has three main game modes: Conquest, Quick Match, and Smash Party. Conquest is an endless battle mode where you race to 10 wins before incurring three losses (like Hearthstone’s Arena). Quick Match is the standard game mode where you are automatically matched against players of the same skill ranking. Smash Party is a custom game mode where you can invite your friends to fight against you. Brawl of Ages also has an Arena TV function which allows you to watch any game in progress. 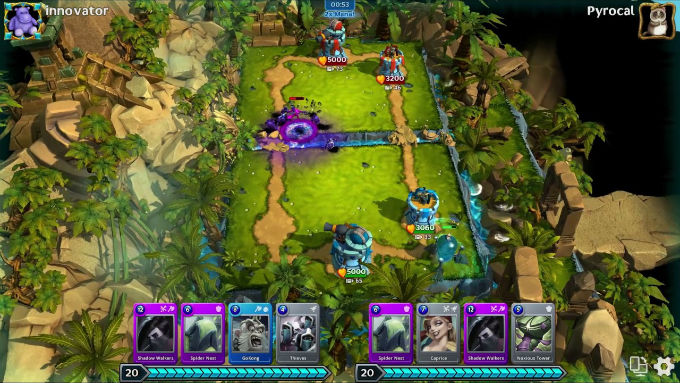 First off, Brawl of Ages is extremely easy to get into. Everything is intuitive, and you can jump into the game immediately without reading the manual or playing a tutorial. The card effects are easy to understand. In short, this game can be played casually.

As said earlier in the review, Brawl of Ages is very fast paced. Each match has a 3 minutes time limit, but most games end in less than a minute. The game can be hectic at times, especially if you’re being overwhelmed by the enemy summons, but it’s manageable. Since cards have a cooldown and require mana, APM doesn’t really matter. It’s a perfect game to play if you’re on a quick break.

Brawl of Ages is also, amazingly, not pay-to-win. There are no expensive premium cards, nor are there card upgrades for paid players. Individual cards are all the same. For example, your Brawler Knight card will have the same effect as the enemy’s Brawler Knight card. There are no P2W cards or items in-game. And while you can customize the cards, you can’t upgrade the cards to give it higher effects. You can only give cards alternative skins.

While reading this Brawl of Ages review, some of the readers here probably realized that the game feels oddly familiar to a certain mobile game. Yup, the game is pretty much an unashamed clone of Clash Royale. Sure the units and the spells are different, but the gameplay, especially the mechanics, is a 1:1 copy. They just changed the names. The only difference is that this game is for the PC, while Clash Royale is for mobile phones.

Brawl of Ages also tends to be repetitive after a while. Once you’ve built a good deck, you tend to stay on it. There’s no incentive to try other decks. Since you have access to all ten cards at the start, there’s pretty much zero need to have multiple strategies. So you end up with one strategy that you spam over and over every game. The gameplay just turns into routine work pretty fast.

Matchmaking is also broken. Most of the times you will be matched with veteran players that have powerful cards, and they will kill you in less than 15 seconds flat. Other times you will be matched against players that will quit the game the moment they start losing. There are also times where you spend five mins queueing for a game. This might not sound much, but this is a game where each match lasts 3 minutes at most.

Another problem with this is card acquisition. They are tedious to get as a free player. You need ten seals for one free spin, and each match only nets you three seals, and that’s if you win. If you get annihilated, you don’t get any seals. And thanks to the broken matchmaking you will be annihilated a lot.

Brawl of Ages is a fun fast-paced game that’s easy to learn and get into while not being bogged down with P2W mechanics. Unfortunately, it also suffers from repetitive gameplay, unbalanced matchmaking, and a tedious amount of grinding for cards. Not to mention the fact that it is a complete Clash Royale clone.

In the end, I recommend this game, especially for Clash Royale players that want a similar game for the PC. Brawl of Ages isn’t perfect, but I believe once they’ve fixed the matchmaking it will make for a pretty fun casual game.