If you are a PC gamer and love monster hunting games, you probably have heard about Dauntless. Dauntless is a free-to-play game that derives its inspiration from Monster Hunter. This adventure game, which is the first by Phoenix Labs, involves fighting big monsters for a couple of minutes with varying degrees of rewards and difficulty. In other words, you will go to a battlefield with a group of friends and try to kill a beast. Once successful, you will return to town and use their parts to craft stronger gear that you will use to kill even bigger monsters. Everything about this monster hunting game is stunning. We have to give a big thumbs up to developer Phoenix Labs for creating a game with a unique sense of style.

From the weapons which are unique to the fancy looking armor and spectacular behemoths. You will be blown away by this game’s art style from the moment you enter Ramsgate, Dauntless’ hub town. We also love the fact that Dauntless accepts new players and ensure they have a friendly experience. Because Dauntless is a live service, you will not have an infinitely expanding experience like in Capcom’s series. However, the game’s developers announced that they will expand the game’s experience. But we cannot speculate on how that will pan out to be. Dauntless’ missions and tasks may be shallow in terms of tasks but that does not take away the fact that the game’s core progression is scintillating.
This game is all about slaying behemoths. That is, you will choose a weapon then go to a battle to smash monsters, break off their parts, and return to town to create new powerful gear. The behemoths are all different but similar in size. They include a combination of fantasy creatures and existing animals but with exaggerated size and strength. For example, Shrike which is the game’s mascot is an owl but with the size and strength of a bear. This monster can fly albeit briefly, which allows hunters to know when to move once it jumps off the ground. Going to battle with Shrike is undoubtedly the first fight that will intimidate you. But as you move on you will encounter other monsters with varying strengths and abilities.

Probably one of the most exciting behemoths you will face early in the game is Skarn. This is a giant rotund lizard with a shell which it uses to protect itself during battle. As a hunter, you need to learn how the behemoth controls its shell. For it to launch an attack, the shell will break off leaving one piece or side of the monster open. Once you learn how to dodge the creature’s attack, you attack it with your weapon when the shell is still open. In this hunting game, you will maneuver around the flames of giant turtles and dodge the lethal tail of a mutant beaver. Whatever beast you are fighting, the key is to learn and adapt. But you ought to know that this game is more than just dodging a beast’s attack. You need to grow your mastery and skills so that you can timely take down more intimidating monsters.

Dauntless offers a friendly experience to all gamers regardless of whether they are beginners or experienced hunters. The combat is simple and seamless while the weapons have direct moves, but also leave room to improve one’s skill set. If you are a new player, it is advisable you choose the simple to use chain blades and swords. On the other hand, seasoned hunters can use damaging inflicting but complex to use weapons like war pike or the axe. All in all, Dauntless weapons are fun to use but the axe and the hammer are more exciting because you will feel the damage, i.e. broken chunks and big staggers, they inflict on the monsters from every swing. 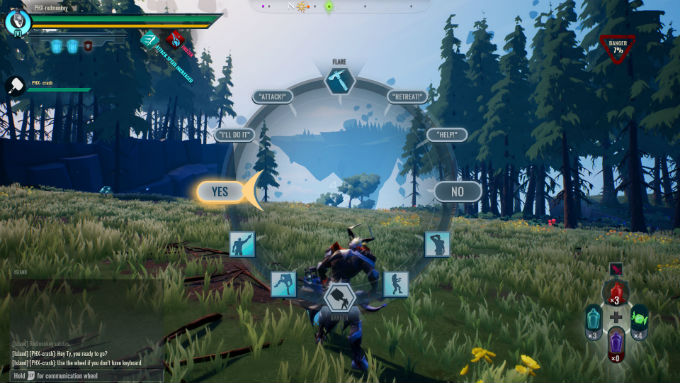 We love games like Dauntless because they are not only addictive loot ladders but also entail setting goals and improving your skill set. During battles, you will learn how to boop and knock down your enemies and not just dodge them. This can be quite exciting for gamers. As you build your skill set and experience, you will be able to tackle more dangerous behemoths. Some behemoths such as Shrike are recycled in different difficulty tiers, but the change in their abilities keeps them fresh and exciting. Another thing we like about this game is that it allows gamers to play as a group. If you thought it would be difficult to take down a whole behemoth alone then worry no more. You can play as a team and help each other to kill the beast. You can also fully revive your teammate in case they are killed by a beast. How cool is that?

One of the biggest drawbacks of this game has to be the scarcity of the content. The maps and missions are quite simple, which can make the game boring to play in the long run. Hunting games should have a compelling endgame so that gamers are motivated to complete all the missions. Unfortunately, Dauntless comes short in this crucial area. Considering that the game is still technically in open beta, probably the developers will improve it in the near future.