Dekaron, formerly known as 2moons, is a free-to-play fantasy MMORPG developed by Gamehi and is now published by Papaya Play.

Dekaron is a traditional fantasy 3D MMORPG played from the third person perspective. It’s an older game so don’t expect revolutionary core gameplay. You click on the ground to move your character, and you right-click and drag the mouse to move the camera around. To attack, you simply click on the enemy. There are nine classes in total, the descriptions of which should make their roles pretty clear.
Despite a fairly generic class set, they do all feel pretty unique. For example, we have the Aloken, a class that uses spears and magic in combat. Aloken’s spells are a bit unique: they are randomly cast whenever you attack or get attacked. The Bagi Warrior is a melee tank class that increases in attack proportional to the damage received by your party. It’s here where Dekaron’s combat stats to improve on the traditional MMORPG formula.

Then there’s Dekaron’s system. To get a pet, you must first obtain an egg from the shop. The pet will follow you around after hatching. Pets are semi-permanent. After 30 days, your pet will revert to its egg state, and you’ll have to buy a shop item to re-hatch it back. Likewise, mounts are also temporary. They cannot be traded, dropped or sold. Oh boy.

Most of the weapons and armors in this game are dropped from random mobs. These can be upgraded using gems called agates. Upgrading a weapon/armor increases their stats and adds a +1 to their name. Upgrading to +3 would add a shining, shimmering effect to your gear, upgrading to +6 will have a dark purplish glow, while upgrading to +9 will add a bright fiery light. Upgrading, however, has risk involved. On the lower tier (~+1 to +3), you only lose the upgrade material. But failure on the higher tiers would result in the equipment getting destroyed. This is pretty standard for a lot of Eastern MMORPGs.

The game has a lot of PvE content, especially for a free to play MMORPG. It’s been 12 years since the game was first released, and it’s still being updated. As a result, there’s an enormous amount of activities available in this game. But there’s also a bustling PvP community.

You can challenge other players to a duel, and you can fight in the arenas. You can also join the fight on guild battles. Lastly, you can just kill players indiscriminately. While the classes in this game are not completely balanced, they are fair enough that it’s viable to PvP as most of the classes. While gear comes into play, skills are even more important. 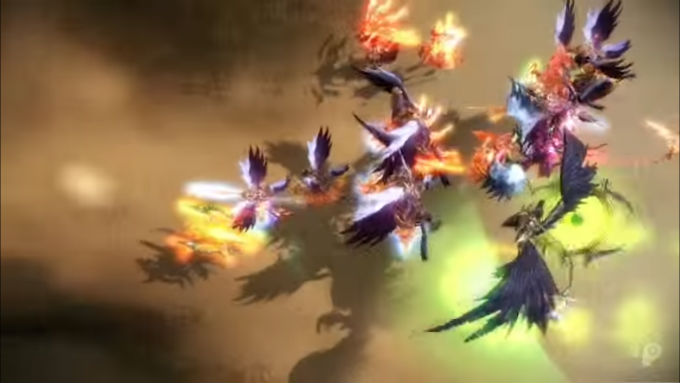 My favorite aspect of Dekaron is the unique class system. As I said above, each class has something in it that makes it stand out. Each class also has multiple ways to play. For example, the Azure Knight is a melee class, but depending on your skill build, you can play it as a tank, a berserker, or a DPS rogue.
Dekaron is also pretty easy to get into. Leveling up at the start is a breeze. You pretty much level up just from killing a single enemy. Of course, that tapers down the more you level up, but it’s still fast enough. This makes the game perfect for casual players or someone that just can’t devote a lot of time.

Perhaps Dekaron’s biggest draw is the action MMO gameplay. Massive multiplayer and action rarely work well together because of lag, but it feels great in Dekaron. Every skill in this game is beautifully rendered, and the effects could even beat most modern MMOs. They are not all eye candy either; they serve a purpose. The attack animation and effects are all real. If you’re a skilled player, for example, you can evade AoE attacks just by standing on its dead spot.

As great as the animations are, the still art is really dated. The game is 12 years old, and it shows. The terrain looks something out of the PS1 era where you can see the polygons on the trees. Character and NPCs look horrible when focused up close. Dekaron is not a game you play for the art.
The interface is also similarly dated. The game has small texts all over the place. Some of the buttons are also not aligned with the text. The game also has a lot of icons with no text. The interface is completely unintuitive, and there is no tutorial, so you are stuck trying to figure it out on your own.

While leveling up is somewhat of a breeze, getting a good gear is not. And like most MMOs, you need proper gear to keep up at the higher levels. You get better gear by grinding for drops. But just having the gear itself isn’t enough, you also have to upgrade them. And since upgrading can fail, you need to have multiple copies of the same gear. This will take a lot of time and adds a lot of frustration.

Like many old games, Dekaron also doesn’t have an auction house. Instead, players set up stalls for other players to browse their wares. It gets kind of tedious looking for items but at least the upgrade system can be avoided by just buying gear outright. Classes are also gender locked.

Dekaron is a good fun MMORPG featuring unique classes, high EXP, and smooth action gameplay. Beware though that there is a big gear grind and that it suffers from dated graphics and UI.

In the end, though, I still recommend this game. It’s not common for MMOs to last 12+ years and still be going strong. It’s the greatest proof that Dekaron is doing something right. So check this game out, especially if you’re curious what old MMOs used to look like. That’s it and thank you for reading MMOBro’s Dekaron review.