Divine Storm is a free-to-play browser-based MMO written in Flash published by Vivagames. The game was first released on March 14, 2017.

Divine Storm is a fantasy free-to-play MMO made in Adobe Flash. The game is played from an isometric top-down perspective and is a traditional ARPG in the same vein as Diablo or Torchlight. There are there classes to choose from: Warrior, Mage, and Ranger. While they all vary nicely in terms of abilities, there is no other character customization other than gender. There are, however, various costumes you can get while playing the game that changes your character’s appearance when you equip them.

The battle system is not that much different from other Diablo clones. To attack an enemy, you just click on a mob and your character will walk to it and use its basic skill to attack. Additionally, you can cast skills with mana by pressing the hotkeys 1-9 or by clicking on the skill icon on the hot bar. Skills are divided into multiple types. Class skills are automatically learned after reaching certain levels. Additional skills may be learned by advancing the main quest.

Then there’s the Elf skills. These too, are learned by advancing the plot, but unlike the other skill types, Elf skills do not cost mana. Instead, they rely on a gauge that slowly charges during battle. Once it reaches 100%, you can unleash the skill, and deal a massive amount of damage to enemies. Finally, there are gear skills based on collecting a specific set of equipment.

Stat growth is automatic without any user input. Players do select how to distribute skill points, which are earned purely from quest rewards. As skills are gained and leveled from quests, Divine Storm doesn’t fall into the grinding trap that many other ARPGs do. Grinding as a whole isn’t really necessary for this game. Between the main quest and escort side quests, there is plenty of EXP to progress to obtaining all the skills you’ll want.

Divine Storm is mostly PvE. The majority of content is instanced, and you spend most of the time in the game performing random quests. And though the game has PvP content, most of them actually involve players cooperating together against a world boss. 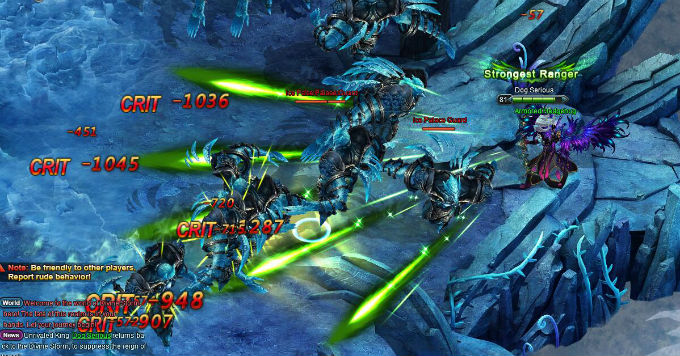 Like many other browser games, Divine Storm offers a built-in bot/auto-play option. The game can automatically play itself, even completing quests on its own. So you can leave the game alone overnight while you sleep and wake up with a more powerful character. You could argue there’s not much point in playing a game that plays itself. Still, it’s a godsend if you don’t have a lot of time to grind.

Another good thing about this game is the generous login rewards. The game gives you a lot of freebies just by logging-in. And they are not limited to items. They even give you new costumes, pets or mounts. The game offers rewards simply for staying online.

For a browser based flash game, the graphics really impressed me. The background and the environment are in 2D, but the character and mob are modeled exquisitely in 3D. The battle effects too are flashy and look quite good. Frankly, this game’s graphics alone can go toe-to-toe against commercial ARPGs like Diablo 3.

Divine Storm’s UI is hard to navigate. It’s too complicated. There are a lot of icons and menus, some of which don’t even make sense. For example, on the top left of the screen there is an icon with your avatar along with your HP and Mana. But it doesn’t show your character level. A sane UI would present your character stat sheet after clicking on that avatar icon. In this game, you’re shown a costume window instead. If you want to see your level and stats, you have to click one of the unassuming icons on the bottom right of the screen. It’s completely unintuitive.

The servers are also pretty horrible. I encountered a lot of lag while playing the game. Sometimes, while walking, your character will snap back to its starting position. This rubber-banding happened multiple times. Whenever you move to a new map, you will also suffer from graphical glitches while waiting for the game to load its assets. The environment would look extremely pixelated, and all NPCs and mobs are invisible. This glitch goes on for around ~20-30 seconds every time you load a new map. It’s extremely annoying.

But the game’s main problem is that it’s massively pay to win. Even with the autoplay feature, there’s literally not enough time in the world to compete with paying whales. A free player can play this game casually at the beginning, but will need to spend money eventually for top end content. As long as you spend money, there’s no limit on how strong you can be in this game.

But in the end, is this game worth playing? If you just want to play casually, yes. The graphics are good, and the game is easily accessible. All you need is a browser with Flash plugin installed. But if you’re hardcore gamer looking to play competitively, forget it. Even if you played this game nonstop 24/7, you still wouldn’t be able to stand a chance against the whales.