Dreadnought is a sci-fi team based space combat simulator created by Yager Development and published by Grey Box. It was first released on August 1, 2017, for the PC and the PS4.

Dreadnought is a multiplayer online sci-fi team based shooter. But unlike most other shooters like Team Fortress or Overwatch, you don’t control a person with a gun. In this game, you’ll be put in charge of your very own capital spaceship which you’ll use to destroy spaceships controlled by other players. Players familiar with MMO shooters like World of Tanks will feel very at home in the methodical, mechanized combat that is Dreadnought.

The game has three factions, each with their own unique ships. The ships are divided into five classes: Dreadnought, Destroyer, Corvette, Tactical Cruiser and the Artillery Cruiser. These play out like classes in Team Fortress and have four special abilities tied to them like you might find in a MOBA. Winning teams must align their team composition intelligently against the opposition. In reviewing Dreadnought, I found this it to be a near even blend of individual skill and teamwork.

Dreadnoughts are the main damage dealer of the team, they have the big guns, and they can take a lot of damage. They are also dead slow. Destroyers are versatile all-in-one ships. They work in any role. Corvettes are the game’s scout. They are fast and mobile but suffer from very little HP. This makes them the best for quick hit-and-run tactics. Tactical Cruisers are the game’s healer class. They shoot out sweet laser beam heals. They are also lightly armed which make them not suited for an offensive role. The last class is the Artillery Cruiser. Artillery Cruisers boasts the greatest amount of firepower out of all the classes, and their weapons also have an enormous range. The drawback of artillery is that they suffer from meager HP along with poor mobility.

Dreadnought has four main game modes: team deathmatch, team elimination, onslaught mode and proving grounds. Team deathmatch is the most standard mode where your only goal is to destroy as many opposing team’s ships as possible. Team elimination is similar to team deathmatch, but you only have one life as a capital ship. If your ship gets destroyed in battle, you respawn as a fighter ship for the rest of the round. Destroying all the opposing team’s capital ships wins the round.

In Onslaught, each team commands an ally AI fleet comprised of command ships, fighters, and assault ships. The goal of this game mode is to destroy the opposing side’s fleet. This mode is score based with the team that reaches the designated score first claiming victory. Proving Grounds is pretty much a PvE Team Deathmatch against bots. 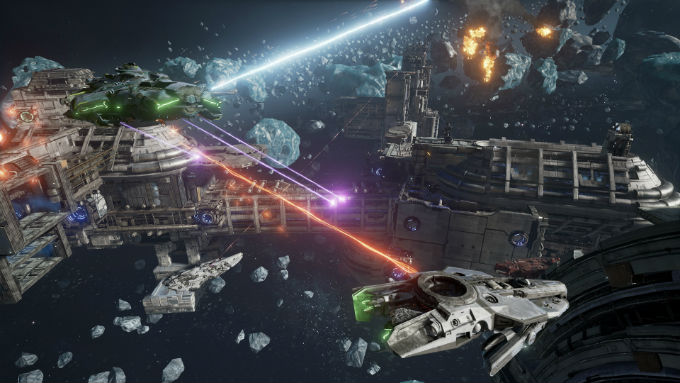 I absolutely love how many ships there are to choose between in Dreadnought. There are around 61 in total, which comes out to about 20 per faction. Faction ships aren’t reskins of other factions though. Each ship has their own unique appearance, weapon loadout, and stat distribution. Also, there are so called “hero ships” with their own preconfigured modules.

Speaking of modules, these little parts add an immense about of flexibility to customizing your ships. Personally, I found this level of customization to be stronger than all other vehicle combat MMOs except for Crossout. Modules’ versatility ranges from nuke missiles to overcharging plasma turrets to point defense systems and even a warp drive that allows you to teleport all over the map. Besides that, there are cosmetic parts that change your ship’s appearance but doesn’t add anything gameplay wise.

The game modes are also fun. All the game modes play quite differently from each other. Team elimination is pretty novel; it’s your standard one life per round game mode like in CS:GO, but instead of locking you into spectator mode you respawn as a fighter jet after you die. Playing as a fighter jet is actually pretty fun, even if you’re no match for a capital ship. Onslaught feels truly epic, like a space battle out of Star Wars. The amount of ships that filled my screen in Onslaught really impressed me, especially with the performance.

The pacing is deliberately slow and makes the game more strategic in nature than twitch based. While it’s certainly a shooter and twitch skill will come into play, Dreadnought is more about putting plans into motion. If a strategic MMO shooter is something you enjoy, then I think you can stop right here and start playing Dreadnought.

However, if you don’t enjoy deliberately slow combat you may not enjoy the game at all. You play as capital ships in this game, and they are large and bulky. Naturally, they handle quite poorly. Going from point A to point B takes a lot of time, and rotating face an enemy is an exercise in frustration.

The space maps in Dreadnought really lack variety. You are playing on a wide open area with practically zero obstacles. There is no cover, no weather effects, no nothing. Just a wide open area. Atmospheric maps take place on planets so there’s more flexibility with landscaping to maneuver around and they have a ground limit and a height limit, so you can’t ascend too high or dive too low. The more I played, the more I appreciated atmospheric maps and tired of the space maps.
My biggest complaint is how grindy Dreadnought is for a free to play MMO. It is just painfully slow to feel like you’re earning any meta progress in this game without spending money. I don’t even see how a free player could own more than a handful of ships after playing it for a couple of months. The game is not pay to win because matchmaking is balanced between different tiers of ships. But it does come across as really greedy from the developers. All the variety that’s available is pretty pointless when you can’t access it without paying 0+.

Dreadnought is a pretty novel, sci-fi space combat game that allows you to take control of capital ships. It allows for epic Star Wars space battles and offers players a ton of ships with immense customization options. Slow, methodical players will enjoy it more than twitch shooters. Everyone will hate how grindy it is to play.

Dreadnought is an accessible game that will play differently than anything you’ve seen before in the MMO space. It may not be something you stick around with long term because of the in-game economy, but it is worth checking out for most people.