tl;dr – ELOA is a well polished hack and slash MMO with a unique three stance mechanic for each class.
PLAY ELOA NOW

ELOA (aka Elite Lord of Alliance) is a free to play fantasy MMORPG developed by NPICsoft and published by Webzen. It was released globally on July 24, 2015.

ELOA is played from a top-down perspective and mostly controlled via the mouse. Players can assign skills and potions to their hotbar at the bottom of the screen. If this sounds familiar to you, that’s because ELOA is a hack and slash MMO heavily influenced by ARPGs like Diablo.

Each of these classes has three stances can switch freely between. For example, the Psychic’s Holy Spirit equips two giant hammers and provides access to various healing and revival spells. Their Sorcery stance equips a staff in one hand and a shield in the other. The Sorcery stance opens up crowd control and AoE attack spells. The last of the Psychic’s stance is the spear wielding Halidom stance. This stance focuses on spawning totems that dish out various buffs as well as charging enemies with your spear. Each stance is fairly unique and in effect, you’re playing three classes in one.

The game’s crafting system is another similarity to Diablo. There are four crafting types: Accessories, Armor, Weapons, and Alchemy. These are unlocked once you’ve reached level 5. Unfortunately, you can only pick one to learn. Crafting in this game isn’t freeform, you can’t craft anywhere. You can only craft while talking to a designated NPC. There’s no level either; instead, you get recipes for new items by paying for them with gold. You can also modify things by reinforcing them using a reinforcement stone, or by socket drilling jewels into it. Both of these methods can be done by talking to their respective NPCs. 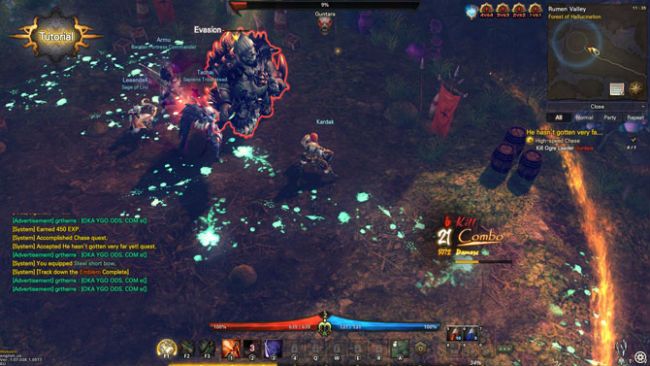 ELOA as a whole looks pleasant. The effects light up the screen nicely without being too over the top. The coloring of the environment instills a fantasy feel and doesn’t feel bland. Usually, MMOs either go for the flashiest graphics and eye candies possible even if it detracts the gameplay, or go with the simplest graphics and effects possible so as to not distract the serious raiders. Well ELOA managed to do the subtle balance between those two extremes. This helps differentiate to differentiate ELOA apart from other fantasy MMOs we’ve reviewed. The anime visuals further separate it from other hack and slash MMOs.

The UI is also clean and intuitive. You can easily play the game without looking at a guide or tutorial. The built-in encyclopedia will answer pretty much all of your questions, making wikis not necessary for this ELOA.

Gameplay-wise, the game’s stance system essentially gives access to three classes in one. It increases the variance of each class, and the stances themselves are all pretty unique and useful in its own way. They’re also pretty intuitive to use, allowing you to switch stances easily at the press of a button. Luckily, the intuitive nature of ELOA’s stance switching doesn’t lead to watered down combat.

I was surprised when reviewing ELOA how complex the combos could be, especially for something that pulls so much from Diablo. Players will need to memorize long combos in order to conquer some of the higher challenges. Like instanced dungeon MMOs, attacking one mobs will pull a pack so players need to be prepared to engage them. Unlike Diablo, these mobs aren’t simple pushovers. ELOA’s ARPG combat is a good example of easy to learn, hard to master.

The game’s map design will feel pretty repetitive early on. They feel like a carbon copy of each other; the only difference is the mobs in it. It makes the game world feel small. It’s a similar issue to Dragon Age II for those that played it.

The crafting is rather limited. Unlike fully fledged MMORPGs or sandbox games, ELOA is all about combat. There are quests in an open world that will help you progress, and they are pretty weak compared to the dungeon aspect of the game. Like most Diablo style games and Korean MMOs, it can feel pretty grindy acquiring new levels and loot.

I’ll close this review recommending this game to those who loves hack and slash mechanics. ELOA is extremely polished; the graphics and UI are neat and functional. The gameplay mechanics are also solid. Keep in mind that there’s very little to do besides fighting. Fortunately, the lack of content is only a problem at the endgame, and it’s not like Webzen abandoned the game. NPICsoft and Webzen are still actively developing and adding content to the game. And like most ARPGs, even if you are repeating the same content there is always new loot to acquire.