Below is our Fiesta Online review. Fiesta is an anime inspired free to play MMORPG developed by OnsOne Soft Ltd and published by Gamigo AG.

Fiesta Online is among one the oldest living anime inspired MMOs on the market. The controls are your standard 3rd person control: WASD keys move your characters around the map and combat uses a typical hotbar set of skills.

There are five main classes: Fighter, Cleric, Archer, Mage, and Trickster. With the exception of the Trickster, the game’s DPS class, the other classes should be self-explanatory. Like many Asian MMOs, this game features class advancement. The 2nd class advancement is available at level 20, 3rd class at level 60, and 4th class at level 100. For the 2nd and 3rd advancements there’s only one option but on the 4th advancement, two classes are made available.

Fiesta Online uses a skill book system. Unlike most MMOs that use a skill tree, here you have to pick up or buy skill scrolls and use them for you to learn a skill. There are three types of skills available: Active, Passive, and Alchemy. Alchemy skills are the game’s crafting skills that allow you create potions, upgrade items, or break down items for materials. Alchemy skills have no level and are not upgradeable.

Fiesta takes guilds to the next level with the guild academy system. Once you’ve created a guild, a guild academy of the same name will be created. Unlike guild memberships, any characters can enroll and join the academy as long as they are level 60 and below. The guild can also set rewards for their Academy that will automatically be distributed to the enrollees once they’ve reached a certain level. The Academy is a good way to find prospecting members for your guild. More MMORPGs need to follow Fiesta Online’s lead here and add guild academy support. 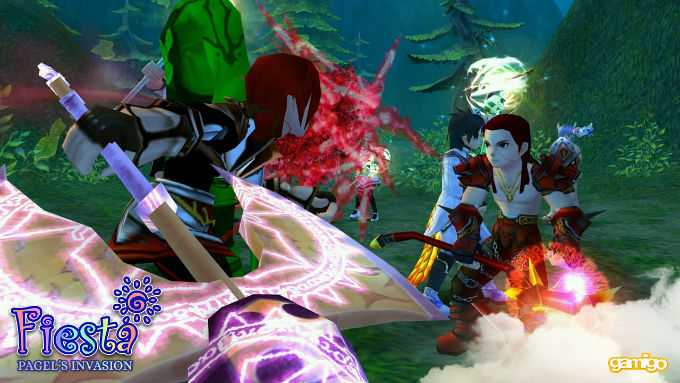 Fiesta Online has a pretty nice cell-shaded graphics. The anime-inspired character designs are cute, and there are a ton of costumes to wear. Unlike other Anime MMORPGs that can have a pretty high system requirements, Fiesta can run on any computer running Windows. The game has low system requirements, requiring only a Pentium 4 and a GeForce MX to run. As a result, this game is perfect for users with low-end PC.

Despite a limited amount of classes, Fiesta Online is surprisingly customizable. Thanks to the empower skill system, two characters using the same class and having the same skill can play completely differently. It depends on how they empowered their skills. Because of that, you can’t guess what the other player’s playstyle is just from their class and appearance. This opens up a whole new metagame strategies on PvP.

The PvP in the game can be pretty fun. The game uses select zones for PvP that one may consider similar to battlegrounds in World of Warcraft. It’s also one of the few MMORPGs with PvPvE. Abyss areas encourage players with great mob drops but with the risk of player killing.

By far Fiesta Online’s greatest problem is the pay-to-win cash shop. You can pay money to have increased damage/defense, etc. For better or worse, these stat increases aren’t permanent. Like other P2W MMOs, they also sell overpowered weapons, EXP boosts, and drop rate boosts. Without these EXP boosts you’re going to be grinding a lot to advance. Enchanting gear can also be extremely frustrating without using the cash shop to offset losses.

Development on the game is rather stale too. Fiesta Online is fun, but there’s not a ton of veterans outside of the pay to win whales. At some point, there simply isn’t enough new content to warrant staying around. The population is holding relatively steady, but this is not an MMO that is growing.

I came into reviewing Fiesta Online with a certain attitude. From the outside, it seemed like a Korean grinder with a pay to win cash shop. And it is. But I was pleasantly surprised by the customization options of the empower skill system compared to other hotbar MMORPGs. It’s worth checking out for that, but Fiesta Online probably isn’t a long term option unless you fall in love with the anime MMO visuals.