Fortnite is a free-to-play massively multiplayer battle royale game developed and published by Epic Games. The game was first released on July 25, 2017.

Fortnite, at its core, is a third-person shooter and as a result the controls are your FPS standards: you use the WASD keys to move your character around, while you use the mouse to aim and look around. Combat is arcadey and more similar something like to Team Fortress than Rainbow Six Siege. Don’t expect realistic gun recoil – Fortnite shooting caters more to the fast and frenetic crowd than the position focused sniper crowd.

What sets this game apart from other shooters like Overwatch or Team Fortress is its gameplay mechanic. Unlike most shooters, Fortnite doesn’t focus on quick deathmatchs, capture the flag, or lengthy objectives. Instead, Fortnite is a game entirely focused on one burgeoning gameplay mode: Battle Royale.

In Battle Royale, players are scattered around an uninhabited map with minimal equipment (in Fornite’s case you start with a single pickaxe). By using weapons scavenged around the map, your goal is to kill and eliminate all opponents (99 in Fortnite’s case) to be the last man standing. Of course, other players are killing each other during the game so winners may kill only a small portion of the player pool. While the initial explorable map is vast, as time goes on the area where you can freely move around shrinks, effectively forcing the players to meet and fight each other. This genre was popularized by the novel Hunger Games and the game PlayerUnknown’s Battlegrounds (and H1Z1 to a lesser extent before that).

Fortnite’s Battle Royale is not much different from your standard battle royale. First, you start the game in a flying bus with your everyone in the game. From there you choose when to exit and glide down to one of the areas on the map. Once you’ve landed, your first goal is to meet up with your team (if you are playing with squads), scavenge for weapons nearby, and look for shelter. But you can’t camp forever. There is a storm ravaging around the island which slowly decreases the safe areas on the map and moving outside the safe area kills you.

Fortnite’s unique call is the addition of building and crafting. Yes, in this game you can actually build structures and create traps. Similar to games like Minecraft, the game world is completely destructible, you can break items and objects in the game world to get materials, which you use to build new structures or items such as traps. Crafting traps requires a schematic or recipe for that trap, along with the necessary resources.

Building structures, however, is entirely free-form. You choose from a variety of preset shapes, and it’s up to you on how you place them. The game has three materials to choose from: Wood, Stone, and Metal. Wood is the easiest to gather but the weakest, while Metal has the highest health but is hardest to come by. Structures placed initially starts out at half-health which slowly fills up to full health after a few seconds. The best Fortnite players are able to quickly build structures to create makeshift shields against opponents and move around freely and quickly.

As you might expect, this is a PvP MMO game (though MMO is pretty loosely here, you do play with 100 people at a whack). Your only enemies are other players. But there is a separate PvE game mode. Fornite’s battle royale mode is actually the spinoff game mode. Fornite’s original main mode is “Save the World,” a PvE survival game where you build forts and traps along with other players to survive against an onslaught of monsters. Unfortunately, unlike the battle royale mode, the PvE campaign mode isn’t free, though the devs do plan to release it for free later on. 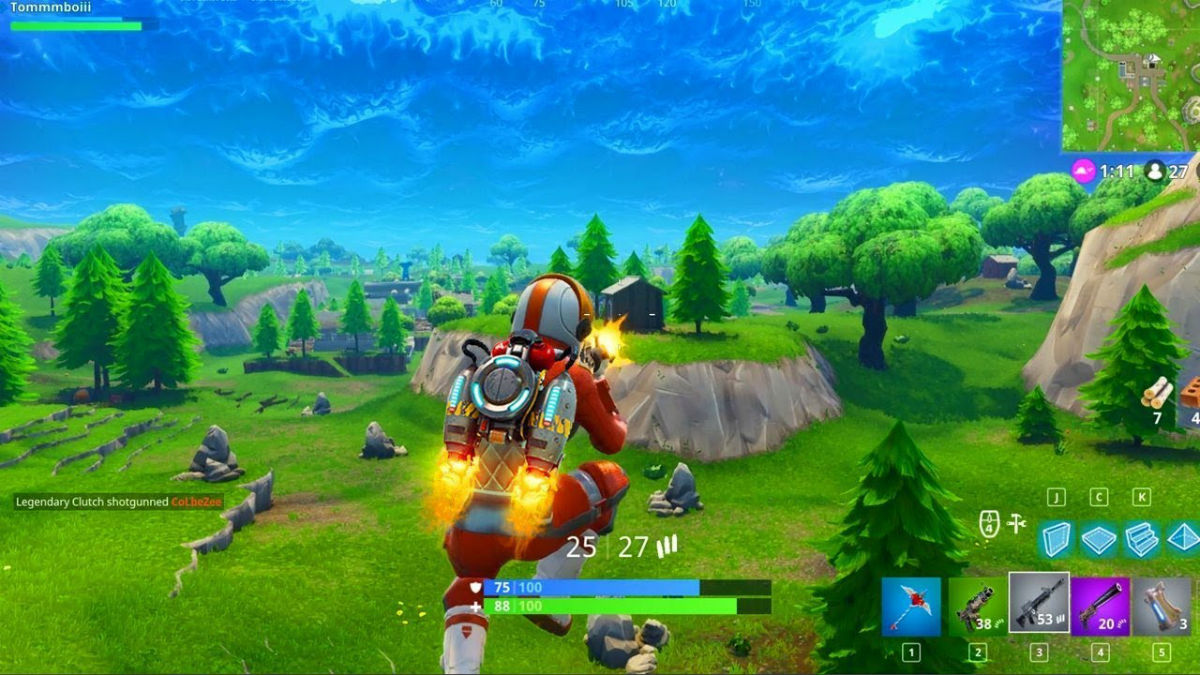 Fortnite has a pretty colorful and quirky art style. Similar to Team Fortress 2, the characters, the weapons, the traps you can build, all tend to be on the wacky side. The environment too is vibrant and easy to look at. And while the cartoony look might not be for everyone, it adds to the charm of this game.

The cartoony and wacky look also fits the game’s gameplay. As I said in the gameplay intro, Fornite is extremely fast-paced and arcadey compared to other battle royale games like PUBG. The shooting mechanics are very responsive. You also don’t die in one hit which allows you to take more risk. The building mechanic also forces you to move around the map to gather building materials. This adds yet another perk to killing and looting other players since they have more items compared to others. As a result, Fortnite is much more aggressive and fast paced compared to other battle royale games. Camping around and hiding until the end of time is not as viable strategy in this game (though still works).

Fortnite also features a vast player base. There around 3 million players playing simultaneously. The game is one of, if not the, most popular game right now so you won’t run out of players. The game also runs on multiple platforms, from consoles like XBox to Windows, and even mobile phones. And all of them can play on the same server.

Another great thing about Fortnite is that it isn’t pay2win. Tthere is a cash shop, but all they sell are cosmetic items. There’s no item you can buy that will give you an advantage over other players. Even the season pass they sell outside of the cash shop only gives you cosmetic items.

Players get rewarded with various cosmetics for free while playing too. There’s a simple level up mechanic that reminds me of other MOBAs. It’s not a huge deal compared to leveling up in an MMORPG, but it’s something to look forward to regardless of winning orl osing.

Unfortunately, there’s only one playable map. The island you get to play in is massive, but it’s still one map. And while the items are randomized, the buildings and the terrain are not, which gives an experienced player a massive advantage.

Fortnite is a great game. If you leave this review with anything, it’s that Fortnite is absolutely wortha play. The colorful and quirky art style, the fast-paced arcadey gameplay, the large player base ,and the lack of p2w items all results in a game that is actually fun to play and with very little downsides. It’s possible you’ll tire of the one map but during my review, I just left sessions wanting to play more. Add a few friends to the mix, and you’ve got a massive yet rewarding time suck of a game. If you like arcadey shooters, go play some Fortnite.