Games of Glory is a twin-stick shooter/MOBA hybrid developed and published by the Lightbulb Crew. It went open beta on April 25, 2017.

Games of Glory is a game that combines MOBA elements with an even more action oriented style of gameplay. Like most MOBAs, the game is played from an overhead perspective. But unlike most MOBAs, you don’t control the character by clicking on the mouse. Instead, you use the WASD to move your characters around the map, while you use the mouse to aim and shoot. There is, however, an alternate control layout that allows you to move your character by right-clicking.

Because this game is an MOBA, you don’t play as a faceless unit. Instead, players select from an extensive roster of characters called clones. Each clone is unique and has their own pros and cons. Each has four unique skills, which you can select and activate by pressing the Q and E keys.

At the beginning of the match, you are given credits, which you can use to purchase one ranged weapon, a gun, along with one melee weapon. There is no weapon combining like in DOTA, but each gun has some upgrades that you can unlock using credits. You gain additional credits from killing enemies.

Unlike most MOBAs, Games of Glory’s main game mode is domination. In this mode, two teams fight in a symmetrical arena for domination. Each side has a base that has an energy core located in the middle. The team that destroys the core wins. It’s not quite that simple though. The base is protected by a forcefield that prevents the enemy team from entering the base. To deactivate the forcefield, victory points located in the middle of the arena must be captured and held.

Another game mode is Superstar. Superstar too is a team shooter mode. But unlike the Domination mode, there are no energy cores. Instead, in every round, a superstar is determined for each team. The team that kills the enemy superstar wins the round and the first team to win five rounds wins.

As you might expect from a competitive game, Games of Glory is pretty much a PvP game. Heck, the game has no single player missions, cooperative modes, and the like. Games of Glory do have bots that are quite challenging which makes them pretty perfect as a sparring partner. There’s no sandbox arena as of the time of this review though. 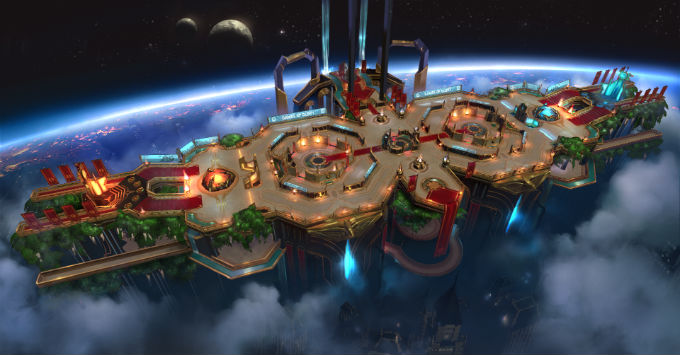 Games of Glory is fast paced. This game is perfect if you want a quick match. Unlike most MOBAs where each match can last over an hour or more, in Games of Glory, each match lasts around 20 minutes. Superstar mode is even faster, lasting less than 10 minutes sometimes. As a result, this game is perfect if you want to play a quick team-based competitive game.

This game also has great graphics. Player animations are beautifully modeled and rendered on the screen. Every gun/weapon in this game has different projectiles and attack animations to them. That’s no small feat seeing that this game has over 50 weapons available. You can also customize your player’s appearance using a multitude of cosmetic items. Unfortunately, cosmetic items can only be bought using real money.

Games of Glory also has a pretty unique art direction. The game has a retro-futuristic art style; specifically, they went with what the 90s think the future will look like. So the game ends up with bright neon blue color for the UI full of simple geometric shapes. And it’s not just the graphics; even the music sounds like futuristic 90s soundtracks.

But the best thing about this game is that it’s completely skill based and not p2w. You don’t need to pay real money to unlock heroes you want. You can buy them using the game’s in-game currency. The only items in cash shop that aren’t purchasable using in-game currency are the cosmetic items, which you don’t really need to play the game.

There are only two game modes available, and they are both somewhat similar to each other. The only difference is that the Superstar mode is faster paced. You can’t even customize them. And these two modes aren’t really unique; they just combined MOBA with CTF mechanics.

Games of Glory also has a pretty horrible tutorial. The tutorial is just a video that plays when first starting the game. The video itself is boring and monotonous, and you have no choice but to listen to it. Even worse, there are three such mandatory videos I can’t even recall what the videos were about.

But this game’s worst problem is the high system requirements needed to make it run smoothly. The game is made in Unity3d. That by itself isn’t bad, but it seems the devs just tacked on as many shader effects as they can, making the game run slow on anything but the beefiest PCs. Not really the smartest thing to do for an action/shooter/MOBA hybrid. Your FPS needs to be high for a smooth playing experience.

Games of Glory is an MOBA with a pretty unique twist. It combines traditional MOBA mechanics with twin shooter action, resulting in a fun, fast-paced gameplay. Unfortunately, it also suffers from a lack of game modes, useless tutorials that are of no use to newbies, and requires a strong PC to run properly.

Ultimately, I recommend this game to anyone that’s not afraid of competition. So check this game if you’re looking for a new MOBA to try out.