Gigantic is a 3D team shooter MOBA developed by Motiga Inc. and published by Perfect World Entertainment. It was released on July 20, 2017 after a lengthy development cycle that nearly saw the entire project canned. Luckily, the developers stayed true to their vision and released a great new MOBA that they can find pride in.

Gigantic is a novel concept that combines MOBA with team shooter gameplay. The game is played from a third-person perspective, and the controls are your standard FPS fare. You use the WASD keys to move your character while you use the mouse to aim and fire. Additionally, you use the keys Q, E, and F to trigger skills, SHIFT to sprint, and SPACE to jump. It’s a 5vs5 PvP MOBA currently without any PvE modes. However, there are three maps to add to the variety of gameplay.

As of the time of this review, Gigantic has a roster of 21 heroes to choose between. Heroes can be unlocked through real money or in-game currency. Another option exists to buy all heroes, current and future, for a one-time price of .99. Like League of Legends, there is also a free set of heroes that regularly rotate to choose between. True to its MOBA roots, every hero feels very unique. At their core, each hero has access to five skills, which can be further customized/upgraded during the game. Whereas most MOBA skill upgrades just increase damage, these upgrades lead to completely new affects and interactions. It reminds me of Heroes of the Storm, especially since there are no items here either.

Gigantic is played in a symmetrical arena with ten control points called power circles scattered around the map. Power circles are objectives that grant the controlling side allied creatures. These creatures can heal players, defend itself to block against attackers, or provide extra power orbs. These power orbs play into the power circles’ other purpose: winning the game.

Each team has a guardian, an incredibly huge and powerful mob at the of their base. The more control points your team controls, the faster your team’s guardian powers up. Power ups can also be earned from killing the enemies so even though there’s no gold to upgrade items, dying is very costly and killing opponents very rewarding.

Once powered up your guardian will assault the other team’s guardian. This essentially lowers its “shield” and allows players to actually harm the giant beast. If the attacking players cause enough damage, the defending guardian will lose one of its lives. The first team to eliminate the three lives of the other team’s guardian wins the game. So the more power circles your team controls, the more attacks you’ll earn, and the higher chance you’ll have to win the game.

So that the game doesn’t go on too long, there’s also a bit of a sudden death element. Once a certain amount of time has passed, or one team has fully powered up their guardian, the game moves to the final phase: the clash phase. During the clash phase, all the control points are disabled, and both team’s guardians move to meet in the middle of the map to perform the last and final battle. 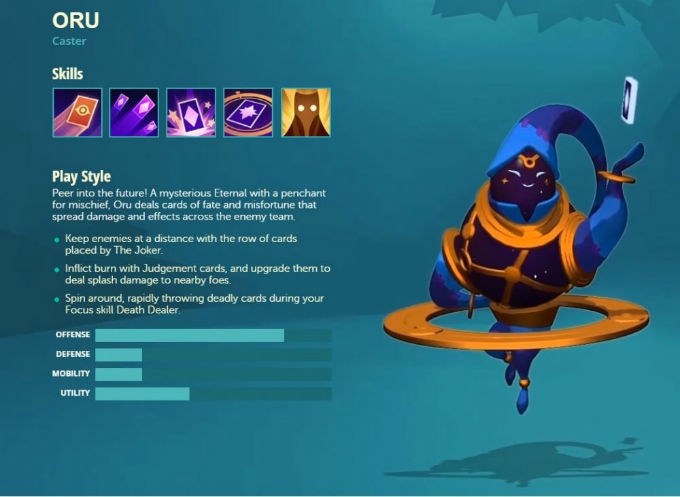 You’ll probably agree that the first thing that stands out for this Gigantic is the distinct cartoony art style. All the character and creature look gorgeous. Every hero and creature feels alive, the animations are on point, and their expressions are lively. It feels like they drew inspiration from an assorted variety of anime and cartoon characters yet blended them into a singular, cohesive style. In my opinion, it’s leaps and bounds above other MOBA shooters like Battleborn.

What I really enjoyed in my experience of reviewing Gigantic were all of the unique heroes. There’s just so many different playstyles available that there has to be a hero for everyone. Some heroes, like the HK-206, plays like your standard FPS shooter. Then there are heroes like Ramsay, which is more of a melee brawler. Playing Griselma feels like a squad-based RTS minigame. There’s a lot of variety between the heroes. Very cool. Given that there are 21 heroes all with noticeable similarities and specific roles, Gigantic’s heroes present players with a lot of replay value.

Gigantic’s most iconic feature is probably the giant monster battle between the guardians. Every time the guardians engage one another, it’s like watching two cinematic kaijus duking it out. The monster fights look dynamic; they actually move all over the place, and they move like fantastical beasts.

I also have to commend Perfect World Entertainment (publisher) Motiga (developer) for their pricing model. Unlocking heroes as a completely free player is a little faster than League of Legends and is on par with Heroes of the Storm. I personally feel like that sort of pacing is pretty reasonable as players can pick up new heroes around the time their old ones grow stale. More importantly, a .99 option to buy all current and future heroes is very fair. It’s super easy to get enough of the free model of Gigantic before deciding whether to go all in at a reasonable price for the paid version.

As a final note, the developers have already shown their commitment to the game. The studio almost closed down and people were working with delayed payments for a not insignificant amount of time. That they stuck with the game is a testament to their dedication and the game’s potential longevity.

There’s one only negative to this game, and that’s due to the matchmaking. It’s not uncommon to find yourself fighting against someone way above or below your skill level. The game has a rating system, but it’s either not working as intended or the player base is too small. For example, a 6K rated player could end up in a game with a 3K rated player. Again on the balance front, melee heroes just seem better. Maybe I’m not good enough at the game to work the shooters, but it really felt like melee heroes dominated the battlefield.

To quickly recap the review for Gigantic, this is a novel hero shooter MOBA hybrid featuring a distinct cartoony art style and giant cinematic battles. The game presents a wealth of diverse heroes to choose between with minimal downsides belonging to the game’s matchmaking. I definitely recommend it for any former League of Legends or DOTA2 players or anyone with a shooter background looking to get in on the MOBA craze with something new and refreshing.