tl;dr – God Wars is yet another team centric turn-based fantasy MMO, but with a base building twist.
PLAY GOD WARS NOW

God Wars is a free-to-play flash-based browser game developed and published by R2 Games. It was first released on February 23, 2017 and is directly available from the game’s official website.

First, let me start this God Wars review by laying down the bad news. This game is yet another Chinese free-to-play browser-based fantasy MMO. Is there really anything new to see? That requires more than a simple yes or no answer.

In God Wars, you play the role of a summoned champion tasked to defeat the evil destroying the world. The game is played from an isometric perspective, similar to games such to other Diablo clones. Similarly, the game is fully controlled using the mouse. You click on the ground to move your character there. Clicking on an NPC or an item makes you interact with it.

You start the game picking from one of the two classes available: Warrior or Mage. Unfortunately, the game has no character customization options. You can only change your name. Even the classes are gender locked; the warrior is male and the mage is female. And contrary to the name both classes play similarly to each other. Only spell names and attack animations differ.

God Wars revolve around heroes. In this game you do not fight alone. Instead you recruit various heroes that will fight with you during battle. But to make them fight, first you have to assign them to a position in your formation. Your battle formation is a 3×3 grid with which you can freely assign any heroes you have. Units on the front will shield units behind them from attacks so proper positioning is key in this game.

When you encounter an enemy on the map, the game switches into a side battle view. Battles are mostly automatic: your character and your heroes automatically attack on their own. However, you can manually trigger skills by clicking the corresponding skill icon on the bottom part of the screen. Using a skill consumes rage, a resource that slowly accumulates during the battle. Some skills also have a cooldown that prevents you from spamming them every turn.

One of the more unique aspects of God Wars is the base building mechanic. In this game, you have a home city with which you can build new structures or upgrade existing ones. Each building gives a certain effect when built. For example, the Temple gives your character some stat bonuses.

The game is mostly PvE. You spend majority of the time in God Wars fighting with various mobs and building up your heroes. There is an arena where you can fight other players for rankings but I’m not sure if you can call that PvP since the enemies there are just completely computer controlled copies of other players. There are also various cooperative modes where you team up with other players to defeat the world boss or to finish a dungeon. 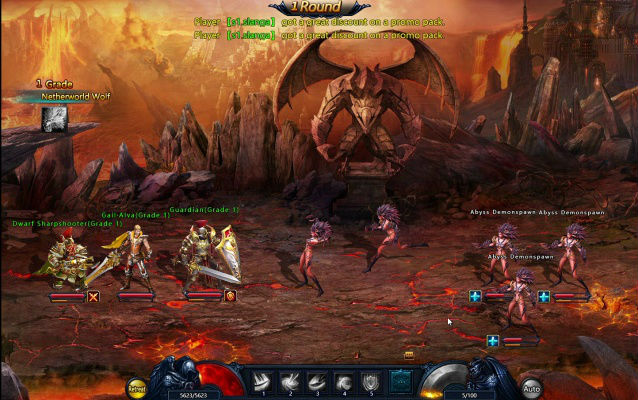 God Wars is also extremely easy to get into. First, this game is browser based so you don’t need to download and install a client. The controls are all simple point-and-click and there are no hotkeys to remember.

Finally, the game employs a lot of quality of life features such as an auto questing/grinding mode. The game can pretty much play itself if you let it. When on bot control, not only will your character automatically walk to the NPC to accept a quest, it will also do what the quest requires.

But I think the most novel part of God Wars is the base building mechanic. It’s not just a mini-game, it’s actually pretty extensive and thorough. There are building queues, research, and upgrades. Every structure also has a different function. For example, the forge allows you to upgrade your equipments while the temple allows you to upgrade your stats by consuming crystals. I haven’t reviewed a game like God Wars where it’s an RPG first and base builder second. It’s always been the other way around so it’s refreshing to see.

Though in the end, this game is yet another uninspired Chinese browser game. I am not sure why they keep chucking new games, especially since they’re all just rehashes of each other. There’s probably already over 100 games using the same game engine and they all look and feel similar. Even the gameplay mechanics are just recycled.

But God Wars’ main problem is that there’s no soul to this game, it’s just a shameless cash grab. Even with the AFK/bot function the game is tedious to play. The quests are uninspired featuring one sentence dialogs. Thanks to the base building mechanics you also need to grind for various building resources like crystals, making the already tedious game more tedious.

But of course paid players get a shortcut to everything. They can auto complete quests, auto raid dungeons, teleport to anywhere, among other things. I feel like the game was intentionally made tedious so that the players give up and just buy the premium membership.

God Wars also has very little character customization available. Not only are there just two classes, you also only have one set of gear per tier. As a result, everyone looks the same. If you want to look different you have buy the P2W gear from the cash shop.

God Wars is a somewhat novel fantasy MMO featuring a turn based battle system along with base building mechanics. The game is also pretty easy to get into and features a whole lot of heroes.

Unfortunately, the game is also pretty lacking on the originality department. This game is practically just a clone of a popular Facebook game. They just slapped a base building mechanic to it.