Gods Origin Online is a free-to-play browser MMORPG developed and published by Vivagames. The game was first released on August 29, 2017, and is currently available at Vivagames’ website.

Gods Origin Online is a browser-based MMORPG that revolves around building a team based on divinities of various myths and legends around the world. One of the first thing you notice while playing is that unlike most other browser-based RPGs, the game isn’t played from an isometric or top-down perspective. Rather, Gods Origin Online is actually a bit of a side scroller MMO.

At the start of the game, you are given a choice to select your class and gender. There are two classes available: Swordman and Magician. And that’s sadly it for customization. Have fun looking the same as everyone else! Fortunately, the lack of classes and customization doesn’t really matter for gameplay. The primary focus of this game is not your player character but recruited team members, the various deities in-game. Gods Origin Online allows you to hire these deities to fight with you during battle.

In another twist compared to other party builder browser MMOs that are becoming popular, Gods Origin Online plays out in real time. This allows players to manually perform skills and abilities using mana. Mana starts at 0 and fills up at a rate of 30 per second.

In addition to standard skills, there are two unique skills: Finishing Move and Sacred Plane. There is a rage bar in this game that charges every time you attack or get attacked. You can use this rage bar when fully charged to unleash a powerful finishing move. Sacred Plane functions similarly: there is a sacred bar that slowly fills up with skill use. At 1,000 sacred points, Sacred Plane becomes available. This changes the background of the battlefield and applies various special effects. For example, the first Sacred Plane morphs the battlefield into heaven and gives your entire party HP regeneration.

Most of Gods Origin Online’s content is centered on quests. They are primarily single player only so it will be more appealing to solo gamers. Like other PvP arenas in these browser games, players can only fight against AI controlled versions of other players. 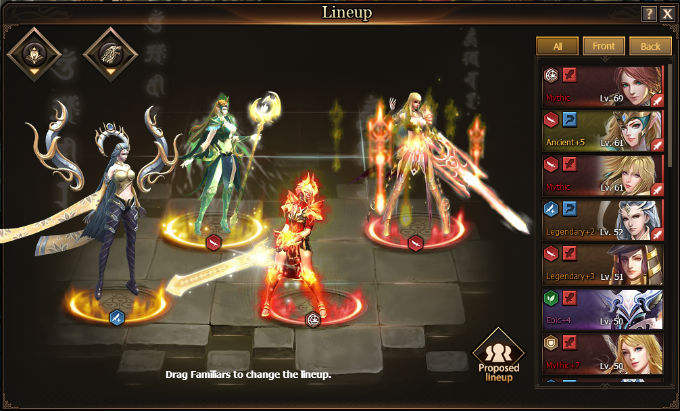 By far the most fun that Gods Origin Online offers is in the large set of party members available to recruit. Pretty much every famous hero or deity is recruitable in this game. And every one of them has a unique appearance and a unique skill set.

Battles are fast and painless, the only parts where you really need to cast skills manually are during the boss battles. The game basically plays itself when fighting trash mobs. Heck, you don’t even need to fight trash mobs in the first place. The game has a “blitz” button that unlocks after finishing a stage that allows you to skip that stage’s battles and just get the rewards next time. Your mileage of automated gameplay being a good feature may vary.

Finally, there’s a surprising wealth of in-game content. In addition to standard quests, there are instanced dungeons, a tower of Babel, world bosses, guild battles, team arena and even a fishing contest minigame.

There are a number of technical flaws that plague Gods Origin Online. The game clearly uses cheap art assets. The characters are modeled in 3D and turned into a 2D sprite. Sadly, the 3D modeling isn’t really good. They look generic and dull. The weak animations exacerbate the problem. Characters hilariously look like their sliding awkwardly whenever they attack.

Gods Origin Online also suffers from memory leaks. The game crashed on me multiple times due to lack of memory. I ended up having to close all other tabs and programs just to play the game. But even that isn’t foolproof. After a few hours of idling the game, it still ended up crashing my browser. Unfortunately, this game requires a lot of idling, so expect to encounter crashes sooner or later.

Another egregious aspect about this game is the non-nonsensical story. The game is in English, but I couldn’t understand a word about the story. The dialogues are nonsensical and jump all over the place. The dialogue is also extremely sparse; with each chapter having less than 20 lines each. To be honest, the game would be better off without any story at all.

Gods Origin Online is a browser-based MMORPG featuring a large cast of recruitable characters and a hassle-free gameplay. The game suffers from cheap graphics with poor animations along with an unstable client that frequently crashes your web-browser.

It changes up the generic “party based browser MMO with automated gameplay” formula ever so slightly. If you like these idle heavy games then it might be worth checking out just to assemble a team of gods. There’s also a lot of content to stay busy with so your idling will be put to as good of a use as any. More serious players should look elsewhere.