tl;dr – Grand Fantasia is an anime-theme MMO with a unique sprite raising mechanic and over 100 distinct areas to explore.
PLAY GRAND FANTASIA NOW

Grand Fantasia is a free-to-play fantasy MMORPG developed by X-Legend and published by Aeria Games. The game was first released on December 1, 2009. It is one of the more frequently updated anime MMO games.

Grand Fantasia is an anime-themed 3D MMORPG with an ample amount of options for character creation. You can select your gender and change your face, eye, hairstyle, hair color, and skin color. You can also randomize your pick, in case you can’t decide. Unlike many other MMO games, you don’t select your class during character creation. Instead, you choose them with a class quest at level 5.

One of the biggest draw for this game is the sprites. Sprites are small spirits similar to pets except more useful. Each sprite has up to 3 gathering/crafting skills which allow them to gather and craft materials for you. But sprites aren’t mindless slaves. Similarly to Tamagotchis, they have a mood and an intimacy bar to keep track of. You have to keep them happy and make sure they’re not overworked.

During character creation, you get to customize your Guardian Sprite’s skill set. Sometimes after a battle, you get a wild sprite as loot. These sprites are similar to your guardian sprite, except that they can’t grow or learn new skills.

Grand Fantasia has both PvP and PvE content. The primary focus is on PvE, but the game has more than enough PvP content. There’s a standard guild war mechanic along with 1v1 duel or a 15v15 battlefield PvP mode. None of the content is revolutionary to top MMO vets, but it’s plenty enough to keep players happily occupied. 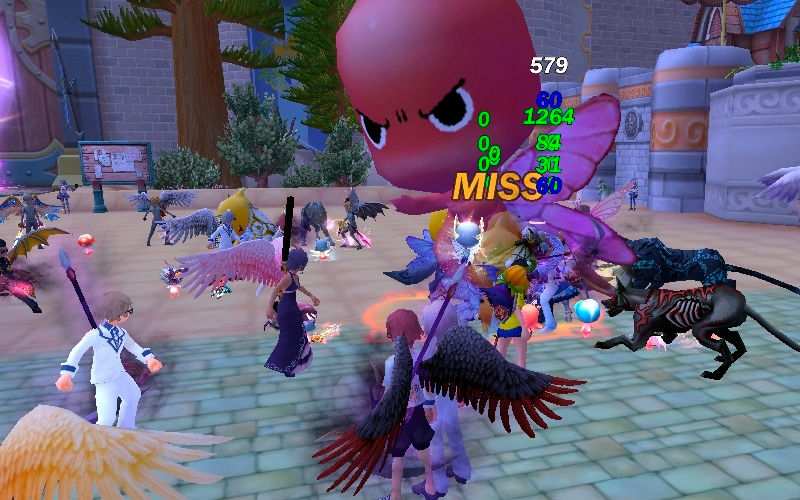 Without a doubt, the sprite raising system is the best part of this game. The sprite raising mechanic is a whole new game by itself. You train them, send them on errands, talk to them. You make sure they’re well rested and not overworked, etc. You send them to battle tournaments.

They aren’t just a mindless entity that follow you around. The sprites actually feel like a pet, and you grow attached to them. And yes, abusing them has actual consequences. There is a sprite king in-game. Taking good care of your sprites allows you to build a good reputation with the Sprite King. This, in turn, allows you to purchase unique items from said Sprite King.

Grand Fantasia also has a lot of content. The game has over 100 distinct areas divided across four different worlds. And each area has its own unique quest line. The game also has over 40 unique dungeons. And these areas look lively thanks to the anime style graphics.

The game’s classes are also pretty great. Each class has their own distinct playstyle. Even the sub-branches play differently from one another. For example, between the Acolyte subclasses the Cleric is a standard healer, but Sage is a class specializing in transforming into various beasts for stat bonuses.

Unfortunately, despite nice stylization, the game’s graphics look a bit dated. Compared to other X-Legend games like Aura Kingdom it doesn’t look good anymore. The game has N64-era graphics. Now if you’re into retro visuals you might like it, but for the rest of us, it just doesn’t look good.

But Grand Fantasia has a more pressing problem than its dated graphics. The game suffers from a dwindling player base. Grand Fantasia has been hemorrhaging players for years. If you start now, all you will encounter are empty cities. And forget about doing PvP, it won’t start due to lack of players.

But that might be a blessing in disguise. Most of the players left in the game are bitter and disgruntled. They’ll just tell you to quit and play other games instead. Chances are you’ll just get flamed and griefed to death.

To sum it up, Grand Fantasia is an anime-themed MMO featuring a unique sprite raising system along with tons of game content. Unfortunately, the game’s downsides are noteworthy with dated graphics and a dying player base.

So in the end, is this game still worth playing? Yes, but only if you bring friends or make friends with a small group of people. There’s a ton to do, but it’s not easy to find players. The game can’t really be played solo either. It’s certainly worth a try though – after all, it only takes two to tango.