tl;dr – HeroWarz is a refreshing ARPG with a colorful cast of heroes that mixes MOBA, hack and slash, and survival game elements.
PLAY HEROWARZ NOW

Below is MMO Bro’s review for HeroWarz, an action MMORPG developed and published by KOG Games. It was released in English on June 28, 2016.

HeroWarz uses a top-down isometric view, and the gameplay consists of hack and slash style mob murder. Despite its silly middle school spelling of “Wars”, there are a couple of things that makes this game stand from the rest. One aspect is the TD (tower defense) element in that you’re mostly on the defensive, and the enemy comes to you in waves. Another is that you don’t create a customized character where you pick a class, race etc., like most MMOs.

In this game, you select from one of the preset heroes available. Think MOBAs like League of Legends or DOTA2. There are seven playable heroes available with another eight in the works. Each hero has their own profile, appearance, and an entirely different play style. For example, one of the heroes is a little girl that summons giant tentacles and other aquatic life forms during the fight. Another hero summons a wrestling ring which she can use to bounce herself or the enemies to perform wrestling moves on her foes. Another feels like something out of an edgy anime, attacking enemies with sword and darkness. Every hero is colorful and different.

HeroWarz is mostly mission based. You start in the main city, the hub world where you explore and find missions to complete. Missions are mainly composed of wiping out wave upon wave of enemies. Upon successfully clearing all of the waves, a boss will appear. Defeat him to accomplish the mission. Up to four people can party at the same time. The game encourages partying to the point of automatically grouping up every person that has the same mission.

Fights in this game are pretty hectic and chaotic. Like I said earlier, enemies come in waves, and they deal a lot of damage. Thankfully, healing pots don’t deplete on use but must be managed on a 30-second cooldown. It’s important to learn how to use your hero’s skill to push or pull mobs away from you, and avoid enemy AoE attacks.

HeroWarz also has a PvP mode called MFL. This mode plays more like MOBA, with a 30-minute time limit. You play in a 4v4 arena map with three lanes. Each lane has one cannon tower for each team, and the center lane has a money pillar. The goal of this mode is to destroy the enemies’ money pillar. Like most MOBAs mobs also spawn for each side. However, they don’t attack the enemy towers and instead just stand in front of the towers to defend them from enemy attacks. There are also neutral creeps which you can kill for EXP, and you respawn shortly after death. All in all, HeroWarz PvP is pretty much a MOBA. 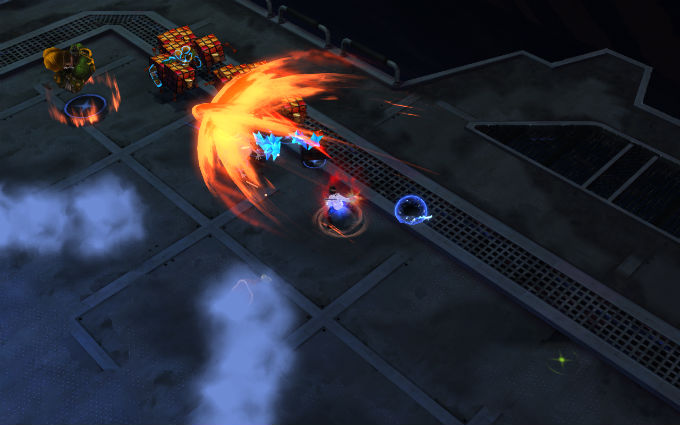 The visuals in HeroWarz will appeal to those who like 2D characters on 3D backgrounds. The colors and animations are pretty slick and look flashy without being too distracting. And these colorful, lively graphics fits well with the fast-paced gameplay.

During combat, the game will always have you on your toes. There is never a moment of boredom; enemies are always rushing you. It’s like a hack and slash MMO meets survival game. Imagine Diablo III where enemies come to you. There’s a lot of things to keep tracking of duing during battle, from comboing to evading enemy attacks to timing your healing pots. You’ll need to be attentive if you want to survive.

But the games’ greatest asset is its heroes. Like I said earlier every hero is unique. They all have different play styles, and they’re all pretty wacky. They also have their own unique dialogue. In this game, you’re not just picking a generic warrior hero #31. The heroes are all different from each other. That you’re not tied to a character is another selling point. Switching to a new hero is a breeze and keeps the game’s challenge fresh.

For some dumb reason, the launcher of this game is a browser plugin, which is pretty stupid since the game isn’t even browser based. Why the hell would a download game need a browser plugin? Thankfully someone created a standalone launcher and uploaded it to Github.

It’s possible that despite the heroes, one may find the game too repetitive after several hours of gameplay. Every mission is pretty much similar and the maps feel small. And there’s really nothing to do in this game except to grind on missions. Those who want an exploration MMORPG will need to look elsewhere. It’s a shame since the actual action RPG combat in HeroWarz itself isn’t bad, in fact, I found it pretty fun, but the lack of variation tires you out sooner or later. The game just needs more content to mix it up and feel less monotonous.

Oddly, there are also very few game options. The graphic settings consist of a single scroll bar. The keyboard controls aren’t re-mappable. If you don’t like how the hotkeys are set, well too bad because you can’t change it.

HeroWarz is a fun action MMO with unique playable characters and fast-paced gameplay. It blends hack and slash combat, MOBA gameplay, and survival-esque missions similar in objectives to tower defense games. Unfortunately, it also tends to feel repetitive after a while. In the end, did I find HeroWarz worthwhile during my review? The answer is yes. The game’s repetitiveness only kicks after several hours into the game. If you don’t take it too seriously and gives the developers time to add content, it can provide good fun for a while to come.