Kritika Online is a free MMORPG developed by All-M and published by En Masse. Like En Masse’s other title, TERA, it will appeal to an audience that prefers more action in their MMO combat.

Let me start this Kritika Online review by saying that this game is a bit different from standard free-to-play MMOs. For one, the game isn’t open world. Instead, you are stuck in various hub towns which cannot be explored. Hub towns are simply a list of menu items that represent places to visit. Similarly, the world map simply shows all the hub towns available.

What this game has an abundance of are battles. The game is played from a third-person perspective. The controls are your standard action/FPS controls. You use the WASD to move your characters around the map with the addition of space to jump and the shift to dash. The ZKCV keys are used to activate skills, and the mouse is used to target or move the camera.

Kritika Online is pretty much a brawler game. Unlike most MMOs, combat is entirely action based. There is no auto-aim; there is no auto dodge. Enemies cannot be tanked while chugging potions. You have to run around the map, manually dodging attacks while aiming your attacks.

The game has four main classes, with each four branching into three different advanced classes each. The four classes are warrior, Rogue, Gunmage and Scyther. The play styles for each class feel more unique than different classes in other MMORPGs. For example, the gunmage focuses on long range attacks making the game play similarly to a third-person shooter. Meanwhile, the rogue class is a squishy class focusing on speed and fast hitting melee attacks. As a result, playing a rogue requires jumping all over the place like a platformer.

From there, classes will be further advanced to their second class which, again, play very differently. For example, the gunmage can turn into a frost Mage, shadow mage or warp mage. Frost mages focus on broad-scale AoE attacks centered on the mage. Shadow mages spawn various tools and creatures to attack enemies. Warp mages specialize in delayed attacks that deal massive damage by teleporting several bombs, bullets, and even meteors to attack foes.

Kritika Online evenly mixes both PvE and PvP content. Since this game isn’t open world, PvE mostly consists of various instanced dungeons or stages to challenge. These dungeons are completely linear. In fact, they are just a straight line to the boss with multiple random mobs along the way. Dungeons can be challenged alone or cooperatively. PvP is a bit more varied. There are 1v1 duels, 3v3 team deathmatches, and team capture the flag. Each PvP modes is fought in a preset arena. 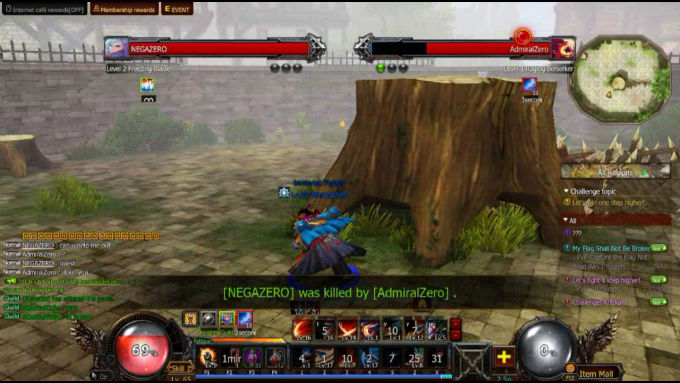 One of the best things about Kritika Online is the diverse array of classes you can play as. The game offers four base classes, with four more to come at a later update. As I said above, each of these classes plays differently from one another. Most MMORPGs that I play rarely encourage me to level an alt. The combat is just too similar from one class to another so I eventually succumb to boredom. Due to Kritika’s unique class style, I could really see multiple alts working out here.

The combat is pretty fun too, though lag sets in more often than is ideal. It’s fast-paced, with constant running, jumping and dashing around the map, launching combos, teleporting and juggling your opponent in mid-air. The skills all have grandiose effects too. They’re over the top in true anime style, and I have to admit they do look cool.

It’s not quite TERA, for good and bad. I’d say TERA’s combat is easier to get involved in but is also perhaps harder to master. Kritika Online occupies an interesting middle ground. Even players who don’t have the best of reaction times should still find Kritika enjoyable, but it’s more of a shallow fun than a deep combat system.

Each class is based on certain fighting anime stereotypes. The visuals only serve to further enhance this feeling. All of the classes really represent one or multiple anime clichés which is great for people who enjoy the genre. There are definitely gameplay moments that made me feel like a character in Fate/Zero.

The Eastern version of the game uses a fatigue system that limits the number of dungeons available per day. Browser and mobile gamers would be intimately familiar with that. Luckily, En Masse decided to Westernize this feature a bit into something called rest. It’s not as restrictive as fatigue but will somewhat punish players who play a lot. Basically at some point, EXP and drop rates will get reduced to 10% of their “rested” rate. That’s a pretty big difference.

The game’s lag isn’t terrible, but it’s also not the best optimized game either. You will occasionally encounter connection issues, and it will tick you off. That’s especially true in PvP. When the game is all twitch based action combat, players can’t afford latency or computer issues.

The PvE content in Kritika Online is incredibly monotonous. There’s only one dungeon layout, and that is a straight linear line to the boss. Sure they add a few gimmicks like uneven floors and traps here. But they’re just that, a gimmick. Dungeons all consist of a straight path with random mobs scattered, with the dungeon boss at the very end of the path.

The game’s a bit on the pay to win side. There’s not an infinite level power to purchase like in some other games, but paid players definitely gain an advantage through costumes. It can be overcome but must be done with greater skill, which doesn’t quite feel fair.

Kritika Online is an action combat MMO featuring a diverse array of playable classes, cool anime-styled graphics, and a fast paced gameplay. Unfortunately, inconsistency with connection quality and client side optimization along with monotonous dungeon gameplay drag it down.

So in the end, is Kritika Online worth playing? I think so, at least for a while. The game is fun to play, especially if you’re a fan of anime.