Lineage II is not a new game to be around, in fact it had been around for more than a decade and a half. In 2011, it became free to play. The game is set in the ancient times, the events of which takes place 100 years after the first game. While it is magnificent, there is a lot more to it than being majestic.

Just as many games out there, it all starts with choosing a character that you’d play in the game. You need to choose one of the available races- Human, Elf, Dwarf, Dark Elf, and Orc. Eventually these races evolve into playing significant roles such as being a mage, archer or warrior. The game is merely proceeds with the player taking quests and killing mobs.

The automated version of the game was created to better suit the mobile phone players, and hence the players are now provided with the option to automatically execute when the quests are made, and when the enemies are faced alone. A pretty interesting addition that many have grown a liking towards, but is it the game to play?

Many agree that Lineage 2 is quite a harsh game that requires an insane amount of strength, grind and investment to move along. The players advise that those stick to the game are bound to find their worth at the end. The game has a lot to offer, and the only way to experience it all is to patiently stick with it, and realize why people truly love it. You’ve got to love grinding to get that far though because it’s a long ways to go.

Those who disagree say Lineage II does not have enough to offer to offset its inherent flaws. 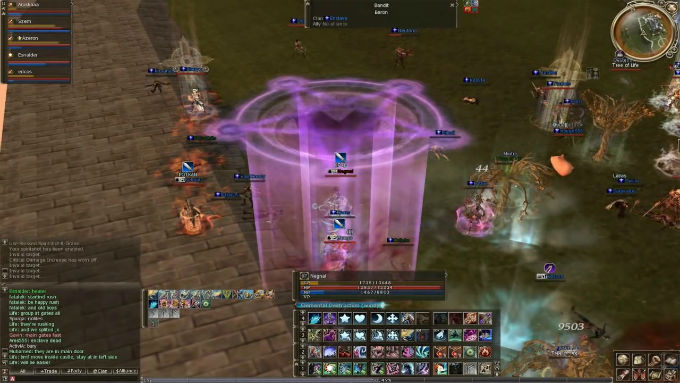 The graphics are definitely old but there’s nice dark, anime inspired touch to them that people still appreciate. The fact that the game still sees new content and updates after so long gives it a good reason to stick with it. There’s a lot of stability with Lineage II that rewards veteran players. The class variety is very strong to begin with (24 classes) and after reaching max level, players can even sub-class and dual class.

Those veteran players will probably be engaging in group PvP. A big part of Lineage II is how epic the castle sieges are. These are huge battles with dozens of players on the screen at the same time. There’s a lot to coordinate in order to win these epic battles so players who like war based PvP games might really enjoy these. Even outside of that, PvP is encouraged through an open PvP system (with player gear dropping if you murder too many innocents).

Like everything else in the world, Lineage II has a flipside to it that many do not fail to acknowledge. After all, its long existence is bound to earn a few negative comments that must be carefully assessed.

Te problem with keeping the spark alive is the sense of newness and wanting to stick to the game. However, many might not find the patience required to play this game due to its repetitive nature. On that note, the grind is pretty insane. It takes a lot of work and effort, and it may not be for the light hearted. Many complain about the ridiculous amount of time it takes from one’s day, some even spend 10 hours for nothing, and they feel the game is pretty much enslaving them. Now that’s a red flag.

Lineage II can overwhelm players. The intricacies involved in it, and the grind it takes can get overwhelming. But, it gets worse when it comes to micro-managing things to a level that it often goes unnoticed. And many don’t see the point of it all after a while. Automation can also be bad for some, and such was the case here for them. The newly introduced feature to kill automatically in the quests is just not what many players are looking for. Why not make the game less grindy instead of creating automated features to grind for you?