Mars Tomorrow is a free-to-play sci-fi transport sim MMO developed and published by gamefabrik GmbH. The game was released on February 14, 2017, and is currently available for the PC, Android, and iOS.

Mars Tomorrow is a strategy sci-fi MMO set in a fledgling Mars colony. Unlike most base building sims, however, you’re not in charge. Instead, you are just one of the colonists. Your role in this game is to supply the colony with the necessary materials needed to grow the colony.

The game is made from flash and is played from a top-down overhead perspective. The controls are done solely via the mouse. There are no keyboard shortcuts, and everything is done by clicking on the map interface. It works well but could handle better with hotkeys.

Gameplay revolves around hiring vehicles and sending them on a supply route to various factories and mines scattered around the map. There are multiple vehicle types available, each specializing in a particular type. For example, gas tankers can only carry gases like argon while liquid tankers can only carry liquid goods like water or saline.

These vehicles can be upgraded in two ways: by researching the necessary tech or by installing plugins. You slowly gain research points while playing the game which can be spent on research upgrades. Research is instantaneous and applies to all of your vehicles. Plugins can be bought from the game store. These can then be installed directly into vehicles. Unlike research which is all-encompassing, a plugin only applies to the vehicle installed to.
Every factory and mine in this game requires certain goods and exports a particular product. It is your job as a player to make sure the goods are flowing. You get paid every time your vehicles make a successful delivery. Mars Tommorrow features 51 different types of products. Some commodities require a license to carry, and you need to purchase a permit first before delivering them.

You can buy shares from the factories and mines, which gives your vehicles priority in loading/unloading at that factory. You can also purchase and deploy drones to help load your vehicles.

Mars Tomorrow cycles through 8 phases plus a final phase. Each phase lasts for ten days. At every phase change, you gain access to new supply goods, new vehicles, and new research. Once the final phase is finished, the game reverts to the first phase.

Despite not controlling the colony, there is also a base building aspect in this game. You have a habitat with which you can build new structures or upgrade existing ones. The most important building is the hangar, which governs how many vehicles you can have. Every hangar upgrade allows you to purchase one additional vehicle.

Mars Tommorrow is mostly a PvE game. It’s a transport management sim through and through. Players who like Rail Nation will probably find this as an upgraded version. There are no battles, troops or anything like that. Instead, you are competing against other players for the lucrative routes and licenses. 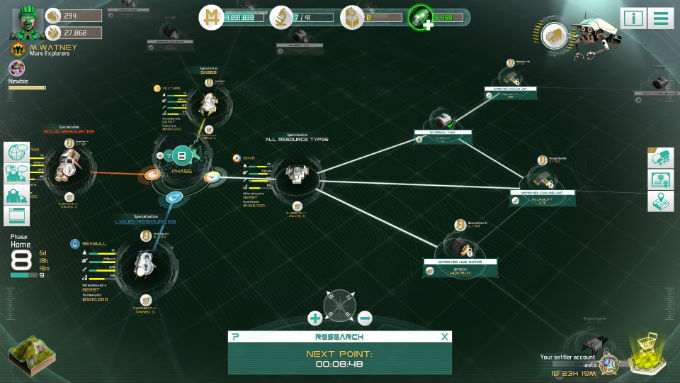 The game doesn’t require a lengthy client download, nor does it require an installation. Mars Tomorrow is completely browser based, requiring only Flash. As a result, you can pretty much play this game on any PC. And there’s also an iOS and Android version allowing you to play the game on most mobile platforms. It’s great for playing in short bursts too.

The graphics are beautiful. It’s completely in 3D, and the effects are great. Mars’ desolate atmosphere is faithfully recreated in this game. Each vehicle has different models, and you can see them travel around the map. The game’s ambient soundtrack also perfectly fits the theme.

But what I like most about Mars Tomorrow is that you are always experiencing progress. You can actually see your colony growing as you supply the necessary goods. Every supply route you establish, every trade product you supply has an actual effect on the overall game world. Every good you deliver has a real purpose.

This all leads to an extremely immersive atmosphere in Mars Tomorrow. Every phase change brings new technologies and trade goods along with the world’s gradually changing appearance. At the start of the first phase, Mars is a desolate wasteland of red. By the last phase, Mars is a green planet chock full of life. Yes, you actually watch Mars being slowly terraformed as you play the game.

Unfortunately, Mars Tomorrow also suffers from an unintuitive interface. The UI is too flashy and distracting. The icons are hard to find, they look like part of the background UI. They are all drawn with abstract sci-fi art that means nothing. To figure out what the icons do, you have to mouse over your cursor on it.

The gameplay is also a bit convoluted. While there is a tutorial, it doesn’t really tell you how to play the game. Rather, the tutorial just shows you how to maneuver the interface. So while you can navigate the game, you don’t really understand the underlying mechanics.

Mars Tomorrow is maybe too complex for its own. For example, you have to calculate the supply and demand of various goods and find the most profitable venture. But you can’t do that without knowing how the prices are calculated. The game doesn’t tell you that. Heck, the game doesn’t even show the price of each good. You have to establish a trade route first to find a price. If this all sounds too mathy, there’s a number of other top MMO options.

Mars Tomorrow also suffers from frequent crashes. The game isn’t really efficient. It eats loads of ram and crashes after a few hours of idling. Since this is a browser based game, it will also take down the whole browser. Even if the game doesn’t crash, just loading game also slows down your browser, even if you’re not tabbed into it. As such, I don’t recommend playing this if you have some important tabs in your browser. If you play Mars Tomorrow at work, make sure to keep the work browser and game browser separated.

In the end, I only recommend this game if you’re a fan of transport management sim like Transport Tycoon. Everyone else will just get disappointed. The game mechanics and UI are obtuse and hard to figure out if you’re new to the genre.