Hack and SlashFree to Play

Marvel Heroes is a free-to-play superhero MMORPG developed and published by Gazillion Entertainment. It is a licensed Marvel product and makes strong use of licensed Marvel superheroes in the game.

Marvel Heroes is a hack and slash game that heavily borrows gameplay elements from action combat MMORPGs like Path of Exile. The game is played from a top-down isometric perspective and controls are simple point-and-click. You click on the ground to move your character, and click on an enemy to auto-attack it. The game has an eight-slot skill hot bar which you can activate by either clicking on it or by pressing the A-H keys on the keyboard.

I found the most interesting thing to review was Marvel Heroes’ lack of classes. Instead, you select your character from various heroes from the Marvel Universe. At the start, you can only choose between Captain America, Punisher, Colossus, Hawkeye, Daredevil, Thing, Storm, Scarlet Witch, Hawkeye, Luke Cage, Black Widow and Black Panther. You will unlock more as you play the game.

To help you pick a hero, the game allows you to freely swap between heroes at the start. But once you’ve reached level 10 in a single hero, you’re locked to that hero and can no longer freely swap between heroes. To play the other heroes, you then need to spend Eternity Splinters to unlock them. Eternity Splinters is relatively common and drops every time you play the game.

The game has a max level of 60, and the skill system is similar to Diablo 2. Every time you level up, you get skill points which you can assign to various skills. Each skill point levels up the skill by one up to a max level of 20, but by equipping items that give an additional bonus to that skill you can reach up to 40. At level 30, the heroes learn their signature skill and at level 52 they learn their ultimate ability.

As this game is a hack and slash RPG in a similar vein as Diablo, Marvel Heroes is mostly PvE. There are daily quest dungeons called Terminals, and there are optional side quests called “One Shots”. But still, there is PvP, though it is unconventional. The game’s PvP content is a MOBA style where two teams of 5 players each battle each other in a three-lane map with creeps. The game also has various cooperative modes called “Challenges” where teams of players must survive against an onslaught of enemies.

Unlike most MMOs, Marvel Heroes isn’t an open world. You operate from a central home base, from which you can sell/craft items and travel to various quest hubs. The quest hubs are relatively small, only containing the various dungeons. Dungeons in this game are fully instanced. 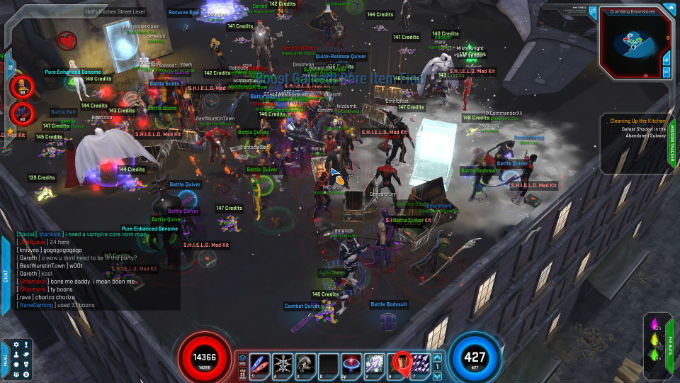 Amazingly, Marvel Heroes is not some half-ass tie-in. The story in-game is actually consistent in the current Marvel Universe. That comes to no surprise since this game’s story is written by Brian Michael Bendis, the author of Ultimate Spider-Man, Avengers vs. X-men and more. As such, Marvel Heroes’ storyline is pretty entertaining to read, especially if you’re a comic book fan.

Marvel Heroes’ gameplay is also pretty solid. The ARPG gameplay manages to be pretty fun, thanks to the wide array of heroes you can select from and a large amount of loot you can get. They pretty much took what makes Diablo 2 attractive and improved upon it. That doesn’t mean it isn’t without flaws. For one, the heroes aren’t all well balanced. Some of the heroes I tried when reviewing Marvel Heroes felt really weak.

One of the best thing about this game is that the developers continually push out updates. On the first release back in 2013, the game was considered a failure. But the developers didn’t give up and continued improving the game, culminating in the re-release as Marvel Heroes 2015, which turned out to be a massive success. The turnaround is about as massive as that of Final Fantasy XIV.

Thanks to that success, the developers are now committed to revamping the game every year. In fact, Marvel Heroes 2016 added a lot of features like a Mac client, Steam achievements, controller support and a massive graphical overhaul. They also added a couple of characters from the current comic season like Spider-Gwen. And they will continue to do so. The long lifespan of Marvel Heroes is a major selling point.

Unfortunately, the game is a massive grind fest, especially if you’re a free player. Unlocking new heroes require Eternity Splinters, which can take forever to get. Farming for gear is also necessary if you want to keep up with other players. It can take a long time to get the items you want, especially since it’s all pretty much a lottery.

I mean, yeah, this game is an ARPG, and that’s to be expected, but most ARPG have you traveling around the game world on foot, giving you a grand sense of adventure. Thanks to the ‘streamlined’ quest hub, this game doesn’t give you that feel. Instead, you’re just left with the tediousness of the grind. The numerous characters also seems to work against Marvel Heroes here. Switching characters can keep things fresh, but you never really buy into a single character like you might in Path of Exile.

The game also has an extremely limited inventory space if you’re a free player, which makes farming nearly impossible. Though to be fair to this game, you can actually expand your inventory space without using real cash, though it does take a long while. But still, loot management is a core of ARPGs. Players of Marvel Heroes should expect to spend at least a little money to upgrade their space.

I enjoyed reviewing Marvel Heroes. The game is pretty fun, especially if you’re both a big Marvel fan and a hack and slash MMO lover. Like other action RPGs, it can get rather tedious at times. Perhaps more so than other top titles in the genre. But it’s well developed, has a long shelf life, and there is plenty of content in the game. All in all, I recommend this game to anyone, but especially those that are into superheroes. The microtransactions in Marvel Heroes are very fair and won’t frustrate you like some other free to play titles.