Master X Master is a real time free-to-play MOBA developed and published by NCSOFT. It’s a relatively new entrant into the MOBA scene with a 2017 Western release date. Like Blizzard’s Heroes of the Storm, Master X Master draws on NCSoft’s characters from proprietary titles to fill the available roster.

Thanks to the rise of Twitch and e-sports, the popularity of MOBAs are soaring year by year. As a result, more and more developers are hopping on board the MOBA train, hoping to be the next DOTA2 or League of Legends. Master X Master is NCSOFT’s attempt to enter the MOBA market.

Let’s start the Master X Master review by saying this is not your average MOBA. Like most games in the genre, the game is played from a top-down perspective. But unlike most competitors where players use the mouse to move their Master (hero/champion), MXM players move with the keyboard and aim attacks manually with their mouse. There’s no automatic targeting in the game, which adds another layer of skill.

The game has incredibly simple but hard to Master controls. The mouse cursor determines where your character faces. The WASD keys move your character. Like a first person shooter, W moves forward, S backward, and A/D keys strafe left and right. The Q and E keys are used to cast the two primary abilities and R performs the ultimate.

Finally, the TAB key is used to swap characters. Wait. Swap characters? That’s right. One of Master X Master’s core mechanic is the tagging system. In this game you select two Masters to play with. Each Master has their own HP and the tagged out Master slowly recovers their HP. There is a cooldown every time you swap Masters, the length of which depends on the game mode.

As you might expect, the game is competitive and mostly PvP based. There are multiple PvP game modes available. First, there is the 5v5 Titan mode which is akin to the standard DOTA style MOBA model with lanes, creeps, and towers. The name comes from the fact that gigantic golems called Titans can be summoned in the middle lane to wreck havoc on the enemy. For a short period, you can also become a Titan itself.

Another mode is the PvP Team Deathmatch. As the name implies, it’s a 3v3 match to simply eliminate opposing Masters. In this mode, there are no creeps, bases or points to worry about. You just focus on killing the enemy team. This mode has a five-minute timer making it the perfect mode to play if you’re short on time.

The last PvP mode is the 4v4 Point Control. In this mode, there are various towers scattered around the map. Your goal is to capture and control those towers. The towers slowly generate points and the team that reaches 500 points first wins. Like the former Dominion mode in League of Legends, I don’t foresee this being too popular long term.

Unlike most MOBAs however, Master X Master does have actual PvE content. PvE consists of multiple stages that entail fighting against waves of enemies while completing various objectives, culminating in a boss fight at the end. It plays pretty much like an action platformer and can honestly stand on its own as a separate game. PvE can be played solo or as a coop with other players. I haven’t actually reviewed a MOBA title like Master X Master before where I could legitimately enjoy the PvE experience so props for that. 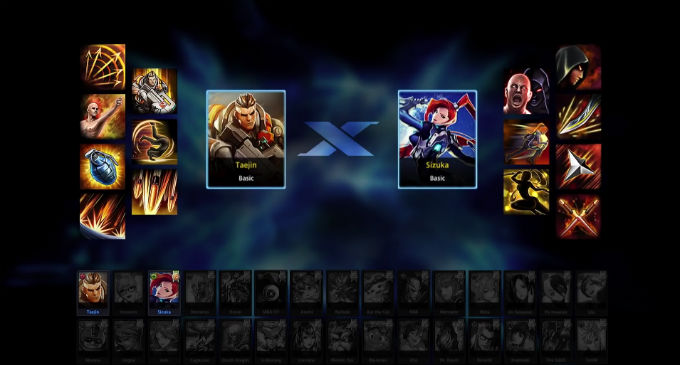 Even if you’re not fond of competitive play, there’s still a lot you can do in Master X Master. As I said above, the PvE content is extensive and can be played either single player or cooperative. There are also various mini-game modes available. For example, there’s a racing mini-game complete with obstacles. There’s another minigame where you go around dodging shoot ‘em up bullet patterns in a fixed map. There’s more to this game other than standard MOBA gameplay.

Another big draw of Master X Master is the large cast of rosters filled with famous characters from other NCSoft MMORPGs like Aion, Blade & Soul, Lineage, etc. If you’ve played any NCSoft MMOs, you’re going to find familiar faces in this game. Obviously NCSoft’s ensemble cast doesn’t hold a candle to Blizzard’s Heroes of the Storm, but it’s nice to see familiar faces.

The best thing about this game though has to be the tagging system. It really amps up MXM’s pedigree as a competitive strategy game, even more than you think it will. In most MOBAs your playstyle solely depends on what character you picked. Sure you still have item builds to consider, but they tend to be similar to one another within a particular role. But here in MXM, your playstyle will depend greatly on your selected Masters. Even if both you and your opponent picked the same two Masters, your secondary Master will greatly influence the decisions and strategies during the match.

Master X Master has non-cosmetic persistent upgrades. You can grind for items in PvE and use those items to improve your Master’s weapons or give him runes with various power-ups. And yes, these upgrades also apply in ranked matches. So if you’re looking for a strict skill-based competitive MOBA, this game may not be for you. If you’re familiar grinding for runes in League of Legends, MXM’s upgrades will remind you a lot of that. It’s mindboggling for a potential e-sport candidate and hopefully will be tweaked.

The Titans almost feel too powerful. It’s hard to counter them, especially if a team haphazardly picks their Masters. In fact, most of the games just end up with Titans vs. Titans. I do admit it looks cool the first few times it happens, but it makes you feel powerless. It does make playing for the Titan objective all that more important though.

Closing out my Master X Master review, NCSoft has a compellingly fresh take on the genre, combining the tactical depth of MOBAs with twitch-style action gameplay. The game’s balance still needs some tweaking, and hopefully the developers will listen to the community.

I recommend Master X Master for any casually competitive player. It’s a very different experience than any other MOBA on the market and you really get the sense that skill matters. It’s simply a rewarding, fun experience. The problem is that to really play ranked seriously, there’s a lot of grinding needed to upgrade all Masters appropriately. I also recommend this game if you’re a fan of NCSoft MMOs. There’s a ton of cool Easter eggs for fans to find. For example, most of the bosses on PvE stages are characters from NCSoft MMOs. Ultimately if you’re still reading this review, as a free to play title, it’s worth the download.