Mythic Glory is a free-to-play browser-based fantasy MMO developed and published by R2Games.

Mythic Glory is played from an isometric top-down view and controls are solely done via the mouse. Characters are moved via mouse clicks and enemies attacked the same way. It feels pretty similar to other Diablo clones in this regard.

Unlike most other browser-based MMOs from China, Mythic Glory is developed with the western tastes in mind. This is apparent based on the design of the characters – both men and women embody power. Males are grizzled, veteran soldiers and women actually athletic instead of typical Barbie dolls in these browser MMOs.

While this game is played from an isometric point-of-view, Mythic Glory isn’t precisely an ARPG like Diablo. Once you engage an enemy on a map, the game switches into a turn-based side battle view. During combat, you and your enemies each take turn attacking each other. You can also cast skills in battle. Additionally, there is a rage meter that slowly fills up during battle which allows you to unleash a powerful attack once it’s full.

As you might expect, this game is mostly PvE. Since combat is instanced and turn-based, most content in the game is solo with no room for cooperation with other players. In fact, you can actually hide all the other players from your view. There are some neat interactive components though such as world bosses and dungeons. Ultimately, it’s more of a solo game where belonging to a guild helps from time to time. PvP system is limited to arena-based duels. 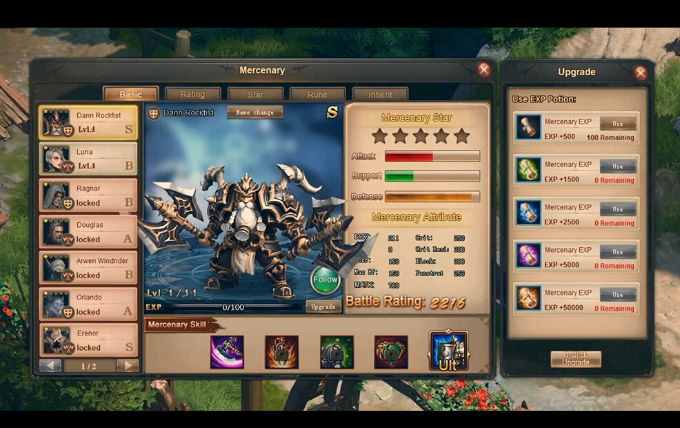 Browser-based MMOs from China tend to be infamous for having horrible translations. Surprisingly, Mythic Glory doesn’t falter here. The text is in proper English with correct grammar, and they make sense. They have proper context. Because of that, you can actually follow the story in this game.

Mythic Glory also doesn’t require any hefty client download. The game runs on any browser that has flash. And since Flash is ubiquitous you can play the game on practically any hardware. As a result, this game is easy to get into. All you need to do is to go to their website, sign-up for the account and play.

Unlike a lot of other browser MMOs, there isn’t an AFK mode. Players have to actually earn their levels in Mythic Glory. While this makes the game world a little more interactive, it’s unclear whether it’s worth the trade-off of losing a valuable grinding tool. The only automated tool is auto-walking to quests.

There’s a good deal of content available. Quests, dungeons, and the main story are more engaging than I was expecting. The cooperative elements are more fun than I’ve found in other browser MMOs I’ve reviewed. It’s not a AAA MMORPG that stacks up against other top MMO games by any means, but it does what it does well enough.

Unfortunately, there’s a lot of bad things about this game. For one, Mythic Glory has cheap graphics. The sprites look like it’s taken from a low-quality asset pack. They look mismatched from each other. For example, a random villager NPC is wearing a maid costume for no reason. They also recycled the same female maid sprite for another NPC in the next city. Character designs are weak in general. None of the mercenaries you recruit look appealing. The animations are jerky and look like they’re animated at 5fps.

As I said in the pros section, the game also doesn’t have an actual AFK mode. While some may like that, this game feels really grindy without it. To add to that, the game also suffers from frequent lag and connectivity issues. I encountered a lot of problems, such as maps only loading halfway. Sometimes you also have to click on an NPC multiple times to register the action. It doesn’t happen every time, but it happens frequently enough to notice.

Mythic Glory really feels plain and uninspired. This game brings nothing new to the table. They just took other games’ gameplay and repackaged it with shittier graphics. The game is an unashamed clone of other turn-based MMORPGs like League of Angels.

I can’t add much else to this Mythic Glory review. The game is what it is. As a free-to-play browser-based MMORPG, Mythic Glory isn’t really bad. But the game isn’t really good either. It’s nothing fresh for the genre, but if you’ve never played one of these browser MMOs before, it is a good starting point. The turn based battles are interesting enough, and it’s nice to play a game that you can actually understand. I just wouldn’t go into Mythic Glory expecting anything revolutionary.