Naruto Online is a fully licensed, official, free-to-play browser MMO developed by Tencent Games, Namco Bandai Games, More Fun Studios and CyberConnect2 based on the Naruto IP. The game is published by Tencent Games in Asia, and by Oasis Games in the West, and was first released on July 20, 2016. Phew! With that out of the way, let’s get started with our Naruto Online review.

There’s been a lot of browser-based anime MMOs based on popular series like Bleach, Naruto, One Piece, Pokemon, etc. A lot of them are unlicensed, with stolen assets from console games and disastrous translations. Naruto Online is different. It’s a browser based MMORPG made in joint collaboration of Tencent and Namco Bandai, meaning it is officially licensed.

Players start with selecting an element from one of five choices: Lightning, Water, Fire, Wind and Earth. Each element carries their own set of skills, along with a unique and non-customziable appearance for the player character. For example, choosing the lightning element will stick you with a Kakashi lookalike as your avatar.

The game world consists of a 2D isometric map where the player moves around interacting with various NPCs. Controls are made primarily using the mouse. During battle, the game switches into a JRPG-esque turn based, side person battle. Players will select a skill to use each turn, with the game defaulting to a normal attack if nothing is entered.

The turn based battle system would be pretty boring without other characters. Naruto Online uses a team based system where the player recruits characters from the Naruto Universe, raise them, and use them in battle. Pretty much every character in the Naruto Universe is recruitable, and the main characters of the series, like Naruto or Sasuke, automatically join you at the beginning of the game.

As you can expect from this system, the game is mostly PvE. Gameplay primarily consists of talking to various NPCs and killing mobs, while collecting fragments needed to recruit the various ninjas in this game. There are also some cooperative events like the World Boss, where everyone fights against nine-tail for various rewards. The top 10 damage dealers during the event get an additional reward. Naruto Online does have limited PvP. Players can fight in an arena which balances out players by leveling all ninjas to 100. 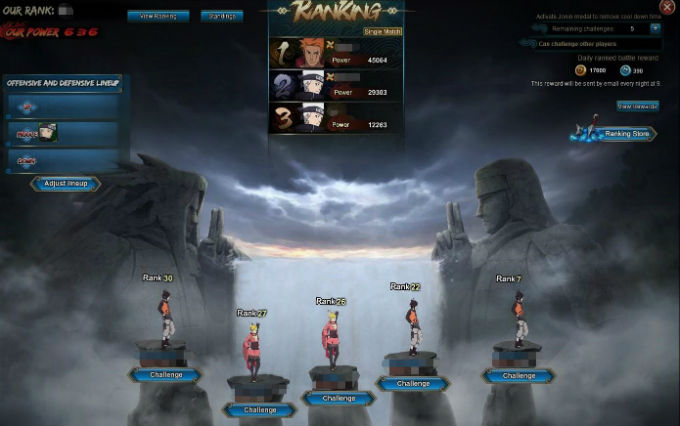 One of the best things about Naruto Online is its accessibility. There are two ways to play this game: via a web browser or the game’s mini-client. Playing with a web browser isn’t fun for slow internet connections because of all of the art assets downloading on the fly. The mini-client solves that problem by downloading everything ahead of time and caching them for later.

Once again I need to call out Naruto Online being an officially licensed title in this review. Unlike most browser based anime IPs, you know this one will actually stick around. There’s not a lawsuit just waiting around the corner.

The game’s main selling point is the large amount of recruitable ninjas. The game has over 100 ninjas available, and each of them have their trademark moves and skills to use. Pretty much every hero, ally or villain in the Naruto storyline can be recruited and played with.

And unlike other Chinese browser based MMOs, this game has a proper storyline. You just don’t move every 20 steps to the next NPC. The game’s storyline is based on the Naruto story, with some minor changes. Before and after initiating a quest, you’ll watch a short episodic skit integrating you into the story. You pretty much live the main Naruto storyline in these short skits. It’s great for old fans and newcomers alike.

For an officially licensed game, Naruto Online isn’t that pretty. The graphics looks like they just took a bunch of cell-shaded models from an old PS2 game. Couldn’t they spare some budget for the graphics? In fact, a couple of unlicensed Naruto games have way better graphics than this. The animations are underwhelming too. It is browser based though so everything considered, I’ve seen and reviewed much worse.

Upgrading and recruiting ninjas is also a tedious process. There’s a ton of grinding to get the fragment of the ninja you want. And every ninja requires a specialized named fragment. And since the fragment drops are random, enjoy grinding forever for a specific ninja. Or you could of course bypass all of that with a handy trip to the cash shop.

Naruto Online can be a very good game, depending on what you want. It’s easily accessible to anyone and has a familiar cast. Unfortunately it also suffers from sub-par graphics along with underwhelming animations and heavy grinding.

In the end though, I still recommend this to any Naruto fans. The game is quite playable and unlike most other unlicensed games, the characters are just not reskins. They are properly balanced and hav their trademark moves with them. General anime fans as well should find a welcome home in Naruto Online. It’s got by far the best story of any anime MMORPG I’ve reviewed since it’s based on the official anime title.