NosTale is a free-to-play fantasy MMO developed by Entwell and published by Gameforge. The game was first released on March 25, 2008, and has recently been enjoying a sort of renaissance. It’s main claim to fame is its Pokemon-esque pet taming feature.

NosTale is styled as a fantasy anime MMORPG. The game is played from a top-down isometric perspective with a standard point and click controls. Characters move with the left mouse button and attack via double clicking. The camera can be moved/zoomed through dragging and scrolling.

NosTale’s character creation is extremely limited. Besides gender, only hairstyle can be customized of which there are two options. Even hair color is extremely limited; there’s only ten color choices in the game. Unlike most other MMOs, you don’t get to pick your class during character creation. Everyone starts as the adventurer class. It’s not until level 20 that you’ll choose between one of three main classes: the melee Swordsman, the ranged Archer, and the magic-based Sorcerer.

Specialist cards come from raids and quests. Also, each specialist class has a job level requirement which prevents you from equipping a card if you have a lower job level. Similar to Ragnarok Online, NosTale has a separate base level and job level.

The most noteworthy feature of this game in my opinion is the NosMate companion system. This game allows you to tame a pet and recruit a partner NPC along with you. While their skill sets are fixed, they can level up, and you can give them various simple commands during battle. Pets can be acquired via capturing random mobs in battle. You can have up to 10 captured pets at a time, but you can only bring one in battle. Partner NPCs are acquired from completing particular missions and they can equip their own weapons and armor. Both pets and partner NPCs has an affection bar, if it’s 0, they won’t obey your commands.

NosTale is mostly PvE, and while there are quite a few events where you cooperate with other players, there’s only two actual PvP mode: Team Arena and Rainbow Battle. Team Arena is a mode where players fight 3v3 in an instanced map. The computer determines the matchmaking. Rainbow Battle is the game’s version of guild wars where you battle against another family (what guilds are called in this game) inside an arena map. There are seven crystals scattered around the map which gives points when occupied. The team with the most points wins the match. 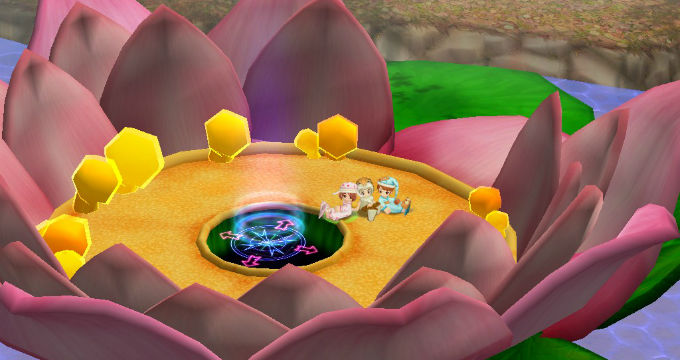 NosTale has a good anime art style. It’s definitely on the cute side, which I normally feel is a bit too much. However, the style fits quite well with this game. The characters and mobs look endearing. And there are a lot of costumes to change character appearance.

The soundtrack is really good too. The fantastical upbeat music completely fits the game. And it has a magical effect that makes you feel nostalgic, even if you haven’t played this game before. It’s not uncommon to see players idle in the central town just to hear the soundtrack.

NosTale also has a decent amount of class diversity. I know they look pretty bad at first glance because it seems the game only has 3 classes, but it actually works quite well thanks to the specialist card mechanic. Each of the specialist class has something unique to it, and since they are equipment, you freely switch between them. This flexibility gives the three classes a lot of leeway in how you can play them.

As alluded to earlier though, NosTale’s best feature is the pet mechanic. You can capture practically any mob in this game and tame it into your pet. And these pets come with their own unique specs and skills. For example, A Pegasus has a 25% chance to deal bleeding while attacking and a 50% chance to reduce damage by 50% by defending. It’s pretty much Pokemon in MMO form.

The game was released almost a decade ago; hence the graphics are pretty dated. While the cutesy anime graphics softened it somewhat, it still looks dated. And it’s not only the graphics that suffer from old age. Nostale’s UI is dreadful. Large resolution monitors are especially frustrating because of the tiny font sizes. There is a lot of cumbersome navigation when it comes to playing the game, at least during the formative hours of play. One specific example encountered: quests markers pop up on the overworld map but not the minimap. So to actually figure out where to go involves exploring a rather large swath of land after seemingly arriving at the destination.

Nostale is a very P2W game. Upgrading stuff has an abysmal success rate, especially at the highest tier. Upgrading a specialist card to +5 has a 50% chance of success, upgrading it to +10 only has a 20% chance of success, and upgrading it to +15 only has a 1% chance of success. If you fail, you permanently lose your equipment. And you’re going to fail – the chance of naturally upgrading all the way to +15 is equivalent to winning the lottery. Of course, the cash shop sells one-time use items that prevent equipment destruction. In effect, this gates the free players from higher tier upgrades since no one is insane enough to try upgrading stuff with an abysmal success rate without any insurance.

To sum up this Nostale review: NosTale is a fun, cutesy MMO featuring a great soundtrack, good class variety, and a novel pet system. Unfortunately, the game also suffers from age resulting in dated graphics, an unintuitive UI, and archaic P2W mechanics.

In the end, is this game worth playing? If you’re a casual player, I guess so. Most of the game content can be done solo, and there’s a lot of content. If you, however, are interested in competitive gameplay, I would stay away from this game. It’s too P2W to compete in without spending a ton of money.